Slide into a comfort-able booth at Canter’s Deli in the Fairfax District and prepare for a culinary adventure that started nearly 100 years ago in Jersey City, New Jersey.

That’s where siblings Ben, Joe and Ruby Canter started Canter Brothers delicatessen in 1924, offering traditional Jewish fare with a distinctive East Coast style. Seven years later, the brothers moved to Los Angeles and opened a new deli on what was then Brooklyn Avenue in Boyle Heights. With deli classics like matzo ball soup, fresh-baked challah bread and corned beef and pastrami sandwiches, the family-owned business became very popular in a neighborhood that was once the center of Los Angeles’ Jewish community.

After Ben Canter and his wife, Jennie, became the primary proprietors, the delicatessen moved to a space at 439 N.

Fairfax Ave. in 1948, and the name was changed to Canter’s Fairfax. With Ben Canter’s daughter, Selmo Udko, and her then husband, Harold Price, the Canters purchased the Esquire Theater at 419 N. Fairfax Ave. in 1953 and created the restaurant that diners flock to today.

There have been a few additions over the years, including a second dining room in 1959 and the world-famous Kibbutz Room bar in 1961, but the landmark restaurant still bears many of its defining features. In front, the iconic marquee from the former theater remains and retro signs welcome guests. Inside, a décor reminiscent of East Coast diners of yesteryear connects customers to the past.

“For many people, it feels like a place of comfort,” said Jacqueline Canter, a third-generation member of the Canter family who currently operates the deli with her brother, Marc. “You can come in, have chicken soup (which she refers to as Jewish penicillin because of its healing properties) and comfort food. Canter’s is a home away from home.” 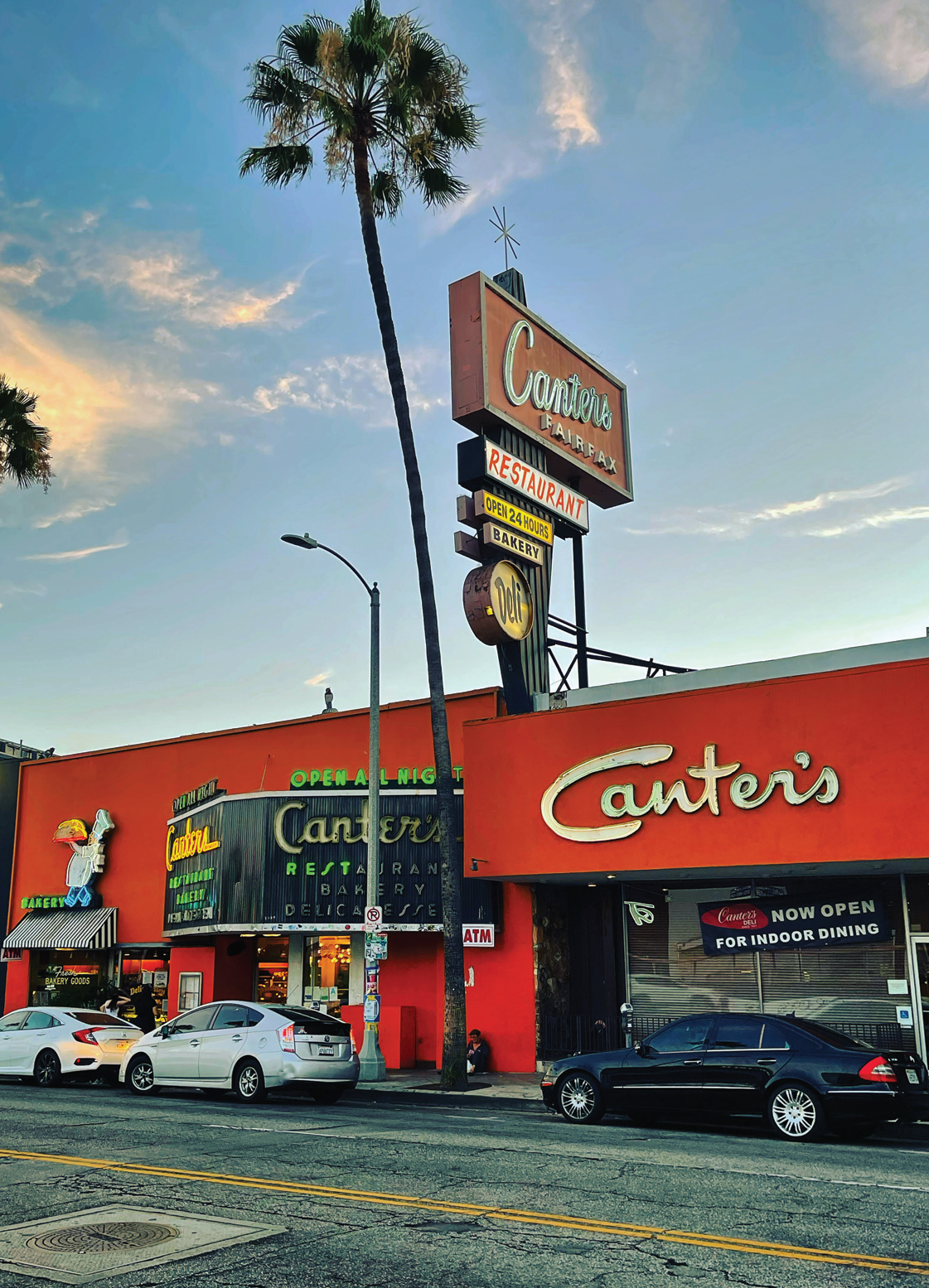 Just thinking about the menu at Canter’s Deli can make one nostalgic – and hungry. Open 24 hours every day except Rosh Hashanah and Yom Kippur, the deli offers a full complement of breakfast, lunch and dinner selections, including delectable deli sandwiches. The corned beef rueben is the most popular, Jacqueline said. Those with larger appetites can try the Fresser, with hot corned beef and pastrami piled extra high on rye, and the Brooklyn Avenue, with a choice of corned beef or pastrami, coleslaw and Canter’s Russian dressing, made fresh in-house daily.

Jacqueline said the original recipes are part of the secret to Canter’s success, and signature items like potato salad, coleslaw, tuna salad and knishes have remained the same for nearly 100 years.

“We still make our own pickles and bake most of the things in our bakery,” Jacqueline added. “Everything is made the same way it always has been.”

The food has attracted a faithful following of people from all walks of life, and many are regular customers.

“There are people who eat three meals a day at Canter’s,” Jacqueline added. “It’s multi-generational. We have people who came as children and now bring their children and grandchildren to Canter’s.”

The delicatessen has also been a favorite for celebrities over the years. Marilyn Monroe, Jack Benny, Cary Grant, Gregory Peck, Danny Thomas, Elvis Pres-ley and the Beatles have all dined at Canter’s Deli, as have Madonna, Mick Jagger, Al Pacino, Cher, John Travolta, Bruce Willis and Robert Downey Jr. Nicholas Cage met his first wife Patricia Arquette at Canter’s, Jacqueline said. Many political figures have also stopped in, including President Barack Obama, who visited while on the campaign trail in 2014.

“There is also a lot of rock ‘n’ roll his-tory with the Kibbutz Room,” Jacqueline said.

Members of Guns N’ Roses and the Red Hot Chili Peppers have been regulars over the years, and Jakob Dylan and the Wallflowers were once the house band in the Kibbutz Room, Jacqueline added.

Another part of the nostalgic charm of Canter’s Deli is the staff, almost all of whom have been with the restaurant for decades. Servers and customers often know each other by name.

“One gentleman, George Kay, has been here 57 years, and some of our customers have been coming here for that long too,” Jacqueline said. “We all pour our life into it, and that’s how you stay a success for over 90 years. People see that, and that’s why they keep coming back.”

Canter’s has also maintained its tradition while keeping up with modern times. Customers who can’t make it to the Fairfax District can place delivery orders online via Postmates in Pasadena and Santa Monica, and a new location has opened in San Jose.

“We are always thinking about new ways we can connect with our customers and keep them happy,” Jacqueline added. “Canter’s has been around for nearly 100 years, and our goal is to be there for another 100 years.”