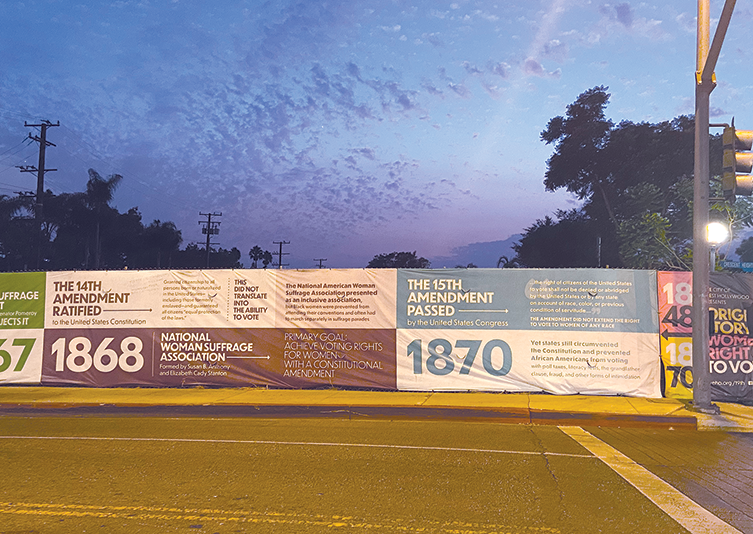 A timeline illustrating how long it took to establish voting rights for women in the United States is located at the intersection of Crescent Heights and Santa Monica boulevards. (photo by Edwin Folven)

The city of West Hollywood and its Women’s Advisory Board will present an annual celebration of Women’s Equality Day on Saturday, Aug. 28, from 6-8 p.m. at the intersection of Santa Monica and San Vicente boulevards.

The event will honor the optimism, tenacity and unrelenting spirit of the people who worked to secure women’s right to vote. It will also illustrate how much can be achieved in a democratic society by the collective efforts of citizens committed to political reform, organizers said.

Community members can participate by picking up free sashes, buttons and other mementos and by sharing photographs on social media promoting voting rights, pay equity for women and support for the Equal Rights Amendment. Masks and physical distancing will be required. West Hollywood businesses are invited to participate by displaying signage, sharing messaging and offering themed promotions.

In addition to the Women’s Equality Day-WeHo Takeover, West Hollywood City Hall and the city’s lanterns over Santa Monica Boulevard will be illuminated in purple and yellow in recognition of the women’s suffrage movement. The display is part of the city’s centennial celebration of the 19th Amendment, which began in 2020 and concludes this month. A three-section historic timeline displaying the long and complex origin story of women’s right to vote in the United States remains on display at the intersection of Crescent Heights and Santa Monica boulevards. It includes commemorative artwork commissioned by the Los Angeles County Department of Arts and Culture in collaboration with the Los Angeles County Women and Girls Initiative.