Wine and dine at Bodega Malbec 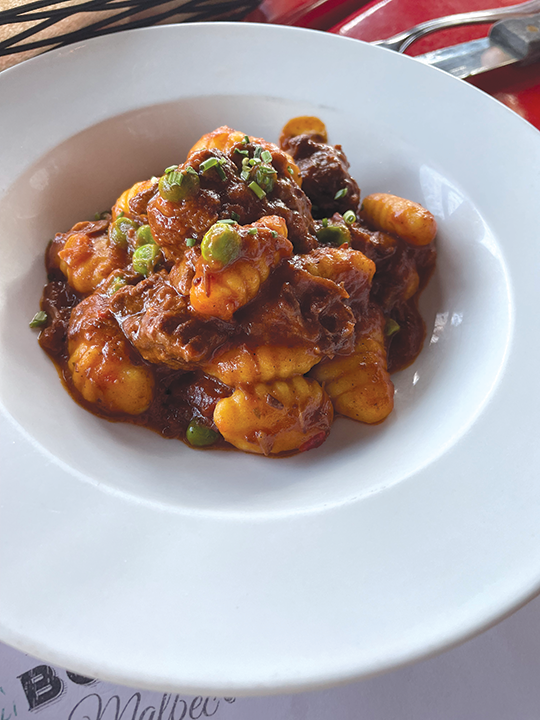 On the 29th of the month, Argentinians dine on gnocchi and wish for good fortune. (photo by Jill Weinlein)

The highlight of the evening while dining at Bodega Malbec, was meeting owner and founder Javier Pardini. My friend Melissa and I dined on July 29, and Pardini insisited we enjoy a bowl of gnocchi. “Everyone in Argentina eats gnocchi on the 29th of the month,” Pardini said. “It’s just before payday, and gnocchi is cheap and easy to make with potatoes and flour. In Argentina, we leave a bill or coins under the plate of gnocchi to bring good fortune in the coming months.” His ragu sauce, made from cuts of the finest steak and the peas add a delightful sweetness to the tomato base and is pure comfort food.

Raised in Cordoba, Argentina, Pardini started working at Gaucho Grill Argentine restaurant in college. First he was a bus boy, and worked his way up to host, waiter, and then manager. In 2009, he opened Malbec restaurant in Pasadena with two partners, and with its success they opened locations in Toluca Lake, Santa Monica and Eagle Rock.

As with most restaurants during the pandemic, the owners went through a variety of struggles. For Pardini, he lost of his father in Argentina, and worked endlessly to keep his restaurant open. Eventually he separated from his partners, but he kept the Toluca Lake location. He started a new concept and renamed it Bodega Malbec.

“I want to create an experience for diners that makes them feel like they are enjoying a traditional Argentine asado at a friend’s house,” Pardini said.

Sitting on the front terrace, we had a sense of traveling through the countryside of Argentina while wine tasting with Pardini and enjoying a marriage of Italian and Spanish bodega specialities.

The menu features items, ingredients and flavors from his childhood including empanadas, pasta, paella, seafood and grilled meat. His wine list focuses on high quality Argentine wines that best express their region, as well as wines from the South Africa, the United States, Australia Spain and Italy – the two European countries to which Argentina and Javier have the strongest roots.

A selection of empanadas made with beef, spinach and cheese, chicken, ham and cheese or special empanada of the day are offered. We selected a special spicy beef and a spinach and cheese. Pardini arrived to pour a highly-aromatic Dibon Cava Brut Rosé offering a hint of watermelon. The bubbles and acidity were perfect with the spicy beef skirt steak empanada.

Next he poured a taste of Anko Torrontes 2019 wine. To the nose, this white wine dazzles with aromas of honeysuckle, grapefruit blossoms and rose petals. It’s medium body and crisp finish paired nicely with the spinach and cheese empanada.

We tasted three more white wines with the grilled octopus. The first was El Enemigo “The Enemy” a chardonnay from Mendoza, Argentina. It’s a rock-star chardonnay offering a full body creaminess of dried-apple, pear and peach with a long and flavorful finish. The octopus arrived with cubed steamed potatoes, aji Amarillo aioli, a drizzle of olive oil with a sprinkle of smoked paprika on top. Next was a taste of Foris from the Rogue Valley of Southern Oregon. This wine was sweeter than the others, and offered a high acid with a hint of residual sugar.

One of the most interesting wines of the evening was the Terre Brûlée from Heartland South Africa. The soil is one of the oldest in the world and the vineyard is filled with Chenin Blanc grapes, producing a smooth mouthfeel and ending weighted with lemon custard.

The national dish of Argentina is asados – a variety of meats grilled on a parillo. We ordered the grilled chorizo and black blood sausage plate. Two links of seasoned chorizo sausages were grilled until crispy with a side of Cannellini bean salad and salsa criollo that had chopped tomatoes, bell peppers, garlic, olive oil and vinegar. We sipped Finca Decero “Remolinos Vineyard” 2017 Malbec, offering a jammy red fruit aroma with herbal notes and a hint of vanilla. This wine is ideal to drink with other grilled meat on the menu including natural flat iron steak, skirt steak, ribeye, tenderloin and New York steak. The tabla mixa offer a selection of two types of grilled beef served in a black skillet with a choice of sauces including a creamy black pepper, salsa Argentina with a Malbec wine reduction, caramelized pearl onions and mushrooms. The beef is cooked over an open fire and delivered sizzling to your table.

The wood-fired skirt steak came with a side chimichurri sauce and course salt to sprinkle on top.

Lastly we finished with evening with Panqueques de dulce de leche, that arrived with two large crepes filled with dulce de leche that were folded into fans. Each were topped with chocolate sauce and powdered sugar. On the side there were sliced berries and bananas, plus a scoop of vanilla bean ice cream and a sprig of mint on top.

‘Jungle Cruise’ is here, but what comes next?

Above-ground transportation should have been considered in plan