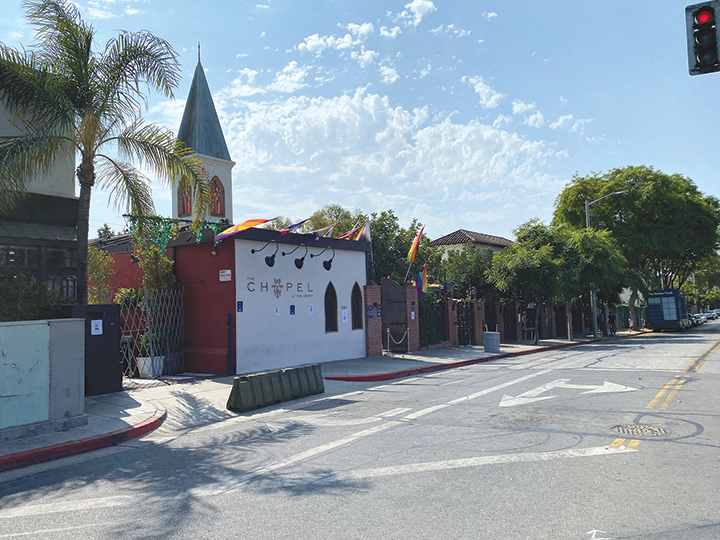 A victim who originally told police that an employee at The Abbey drugged her has recanted her story. (photo by Aaron Blevins)

Authorities with the West Hollywood Sheriff’s Station and the Los Angeles Police Department continue to investigate claims that two women were possibly drugged at The Abbey Food and Bar in West Hollywood.

One female victim who previously posted on social media that she thought employees of The Abbey placed a substance in her drink that made her ill has since posted that she no longer believes that was the case. The victim, who reported the incident to the West Hollywood Sheriff’s Station, said she met with representatives of The Abbey and watched video from her July 29 visit that showed the bartender did not place anything unusual in her drink.

“After The Abbey provided me with new information, including the opportunity to review video, I now want to correct the record and clarify what happened based on new information that I recently received,” the victim posted on Instagram. “My review of The Abbey’s video footage showed a bartender using two bottles to make my drink and not placing anything else in the drink. Video footage also showed me dancing several feet from the bar, but no one tampered with my drink during that time. Obviously, what happened to me that evening was shocking and painful. At all times, based on my review of the video footage, I now believe that what happened to me that night was not the fault of The Abbey or their staff. I also want to apologize to everyone to the extent some of my statements were inaccurate in any way.”

The Abbey also responded via Fecebook after the victim posted the updated statement.

“Thank you for acknowledging your mistake,” The Abbey’s statement read. “We work hard to keep The Abbey and our guests safe.”

Lt. Bill Moulder, with the West Hollywood Sheriff’s Station, said the victim’s claim is still being investigated and the case remains open. The Los Angeles Police Department is also investigating a claim by a female victim who reported that she went to The Abbey on Aug. 1 to have drinks with friends, and didn’t remember anything afterward. The victim said she awoke several hours later in an apartment in Hollywood with a man she did not recognize. The victim believes she was sexually assaulted and later reported the incident to the sheriff’s department.

The LAPD’s West Bureau Sexual Assault Detail is now investigating that case because the victim reported the residence where she awoke was in the 5600 block of Lexington Avenue in Hollywood. Detective Brent Hopkins confirmed the investigation is ongoing and said authorities are working with the victim, the sheriff’s department and The Abbey to determine exactly what happed.

“Cases like this are very sensitive,” Hopkins said. “We definitely want to corroborate the statement from her and make sure she is OK. We also want to make sure we have all the information.”

Moulder said detectives at the West Hollywood Station are also in the process of reviewing camera footage and interviewing representatives of The Abbey and potential witnesses before deciding how to proceed regarding the incident on July 29. He said the department is also taking other measures to ensure safety at restaurants, bars and nightclubs, including holding undercover operations. The city of West Hollywood issued a bulletin on Aug. 13 outlining measures being taken regarding the allegations of drinks being drugged.

Moulder said the sheriff’s Entertainment Policing Team and Community Oriented Policing and Problem Solving Team, which are collectively comprised of seven deputies, have been visiting restaurants, bars and nightclubs to raise awareness about the issue. Plain-clothed deputies are also monitoring establishments throughout the city, he said. Authorities are also looking into whether a patron could be responsible for drugging drinks.

“In all these cases, anything is a possibility,” Moulder said. “We want to look at everything and if something happened, identify who was involved.”

The city’s Code Compliance Division is also considering expanding alcohol server training programs at bars and nightclubs. The city plans to create a mandatory program for servers to address issues related to alcohol, and develop an educational campaign to promote customer awareness, safety and security.

Members of the West Hollywood City Council expressed concern about reports of people tampering with drinks at its meeting on Aug. 16.

“I want to thank those individuals that have spoken up, and I want to let them know that I stand with them,” Councilman John Erickson said. “I believe in the process that was set forward and we are doing all that we can here at the city to make sure that when you come to West Hollywood and go to one of our businesses that you are safe and secure. Of course, there are always going to be bad actors, but I know how hard it is to speak up sometimes. I know our businesses are doing all that they can to make sure people are safe.”

Councilwoman Sepi Shyne also said she is concerned about the reports.

“I have had people reach out to me personally. I have seen multiple, multiple posts online and I have read articles. I am happy the city put out the statement. The reality of drugging in nightlife and sexual assault is that they are very difficult and real issues that we need to deal with,” Shyne said. “All survivors need to have a safe space and environment to be able come forward and report what has occurred to them. What we need to do is always make sure we are working in collaboration with authorities and community partners to provide all the resources we can as a city to our community and our businesses to help keep everyone safe.”