‘The Walking Dead’ is anything but lifeless 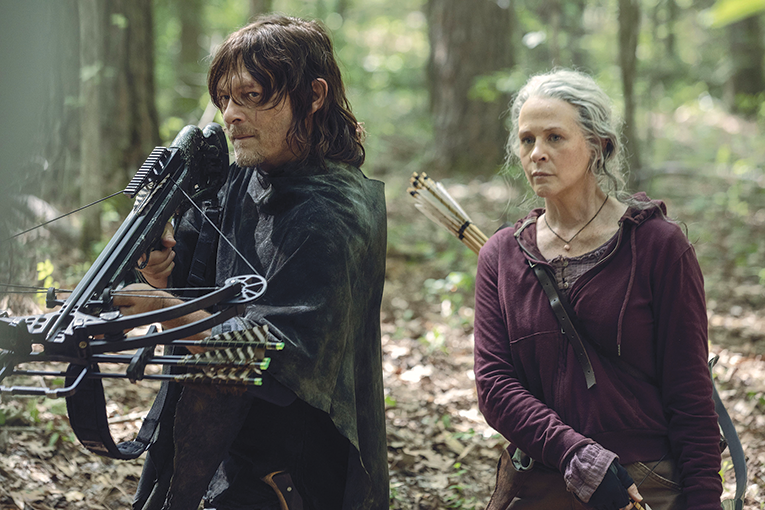 Norman Reedus and Melissa McBride star in “The Walking Dead,” which has remained compelling and fresh over 11 seasons. (photo courtesy of AMC)

Over the past five years, many a digital talking head followed the occasional episode’s rating dips with a declaration that Robert Kirkman and Tony Moore’s comic book adaptation has run its course. “‘The Walking Dead’ should die,” such headlines read.

But “TWD” presses on, reaching its 11th and final season, which premiered Sunday. Certainly, plenty of folks tuned out some time ago, but for us faithful many, we stay for the splendid characters dying, thriving and surviving a dystopian future.

As with all zombie fare, the greatest horrors are often not those slow moving creatures. How would the living respond to such a catastrophe? Mostly, the answer is not. As the series progresses from its origins a month after the outbreak, Deputy Rick Grimes (Andrew Lincoln) seems like a morally centered leader, though madness challenges his resolve.

A central question: are the central protagonists heroes, villains or blends of both, redefining right and wrong based on their temperaments? Rick struggles with this, but he’s hardly alone. There’s also Carol (Melissa McBride), once a quiet mother weathering an abusive husband.

She endures one of the most drastic transitions, eventually morphing into the one who quietly smiles and bakes cookies while she concocts plans in service of the greater good. That doesn’t always mix well with others who might find a Machiavellian sensibility offensive.

Her opinions might appear severe at times, but then comes a crazy community leader with an affinity for zombie heads in jars, cannibals and an array of folks who believe the undead should be accepted – humans should become as much like them as possible.

That’s the real strength of this show, what makes it evergreen. As the world changes around us, individuals and groups react in ways that redefine what it means to be human. The zombies never change. Bodies just decay. But the grappling with joy and tragedy, violence and peace, do so amidst conflicting ideologies.

How villains and heroes, and everyone in between, confront their own cognitive dissonance makes for a splendid intellectual exercise. Try to get in their minds – imagine the world gone wrong – and truly consider how you might act. The characters are so rich and infuriating, from the wonderfully good Glen (Steven Yeun) to the (almost) entirely vile Negan (Jeffrey Dean Morgan).

I’ve stood by this show from the start, praising the six episodes of season one, when things might’ve felt a bit fresher. Then comes a second season that slows down immensely. From there, the series establishes a central rule: don’t get attached. Almost anyone can die. 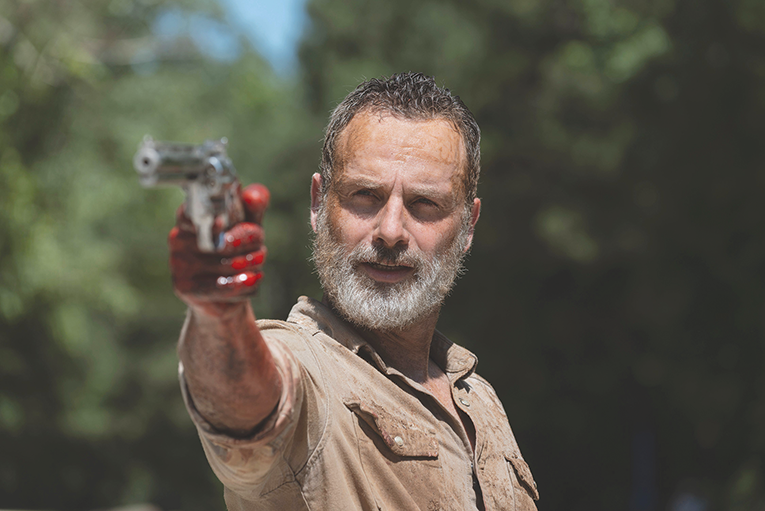 Andrew Lincoln, as Deputy Rick Grimes, is one of the most memorable characters in “The Walking Dead.”

And as the series progresses, madness sinks in, and characters feel more like the creations of, well, a comic book (i.e., the inaugural appearance of Danai Gurira’s Michonne rocking a samurai sword and two chained zombies). This isn’t a dig but a reminder that the visual creativity and the absurdity of various characters – caricatured in stylized ways (i.e., Josh McDermitt’s Eugene) – work incredibly well on the small screen.

We can’t discuss a zombie show without saluting the costume designers, makeup artists and effects legends bringing so many decked-out actors and animatronic creatures to life. Each episode debuts at least one notable undead antagonist, and each presses the boundaries of what sorts of gore are acceptable for basic cable.

The flagship series might be coming home as a final 22 episodes must wrap up a timeline dating back almost 20 years, but plenty of other things will take the story in new directions. The first spin off “Fear the Walking Dead” continues with six seasons to its name and another announced. A second spinoff, “World Beyond” will have a second, final season (not a shining moment from a show with mixed reviews).

Lincoln’s exit from the primary show didn’t conclude the way most viewers expected. Instead, he’ll star in a theatrical trilogy of films, AMC‘s first attempt at material for the big screen. Lastly, two beloved, central character from “TWD” will press in yet another forthcoming show. So roll your eyes if you must, but AMC is a zombie network without much concern for naysayers. Live on “Walking Dead,” live on.