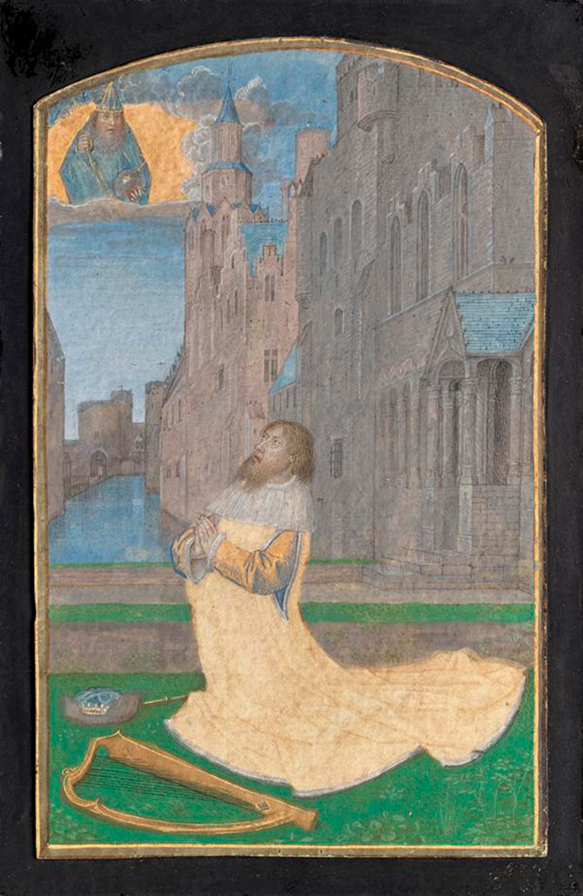 “King David in Penitence” is among the works included in the new exhibit at The Getty. (photo courtesy of the. Paul Getty Museum)

The Getty presents “Transcending Time: The Medieval Book of Hours” on view from Aug. 31 through Feb. 20, 2022.

Books of hours were among the most widely produced and used manuscripts in the Middle Ages. The decorated prayer books not only structured time for readers (over a day, year or lifetime) but met an increasing demand for private and personalized Christian devotion.

“Transcending Time: The Medieval Book of Hours,” on view at the Getty Center, offers a glimpse of the many ways medieval Christians sought to understand the most significant aspects of their lives – love, labor and death, among others – as bound by the passage of time.

“This exhibition draws upon a major strength of the museum’s holdings as books of hours comprise nearly a fourth of the manuscript collection,” said Timothy Potts, the Maria Hummer-Tuttle and Robert Tuttle director of the J. Paul Getty Museum. “The flexible nature of illumination in books of hours and their wealth of imagery allows us to present an in-depth story of personal devotion and the conception of time during the medieval period.”

The exhibition is divided into three sections: how time was structured, the evolution of the book for private devotional practices and the thriving late medieval book market.

Books of hours ordered time for readers, segmenting their experience over the course of hours, days, months, years and even lifetimes. The central devotional text was the Hours of the Virgin, a set of prayers in eight sections recited at regular intervals during the day (called the canonical hours), modeled after the practice at Christian monasteries. Many books of hours also included a calendar featuring saints’ days, seasonal (often agricultural) activities and zodiacal signs. Books of hours connected readers’ experience of their own mortality with the larger scale of time conveyed through biblical texts and images.

During the later Middle Ages, public worship shifted from religious services in churches to more private devotional practices. This change sparked an interest in prayer books that incorporated varied texts and images to encourage individual reflection and supplication, often intensely personal in nature.

“Books of hours are fascinating objects because they touch so many parts of their readers’ experience of the world,” added Larisa Grollemond, assistant curator of manuscripts at the Getty Museum and the exhibition’s curator. “Because they were made in such large numbers, the changes in their production and decoration can also tell us a lot about the medieval book market over time.”