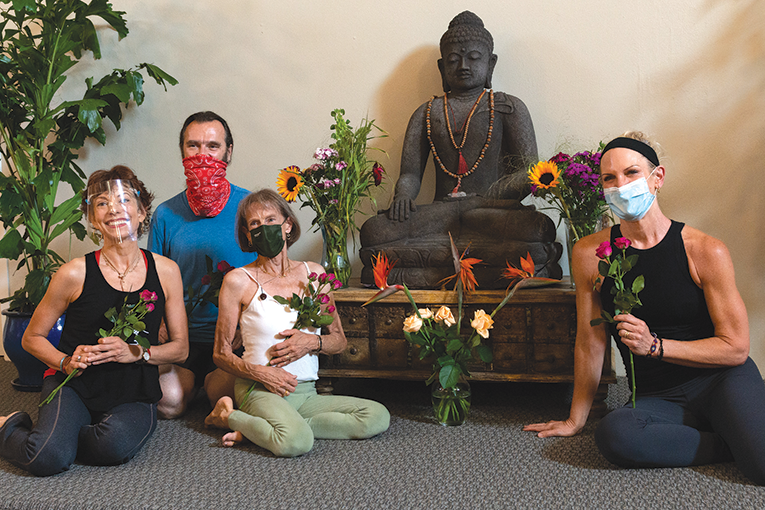 The Center for Yoga has reopened with support from the community. Teachers on opening day included Jeanne Heileman, Joe Kara, Lisa Walford and Andrea Marcum. (photo courtesy of the Center for Yoga)

The Center for Yoga, Los Angeles’ longest continually-operating yoga studio, has reopened thanks to a coalition of former teachers, staff, students, neighbors, investors and local business owners who led a community-based effort to reclaim a historic space in Larchmont Village.

Like many industries and businesses, the pandemic had a detrimental effect on the yoga business. The center was founded in 1967 by yoga pioneer Ganga White, and purchased in 2004 by YogaWorks. When the pandemic occurred, the studio closed and shifted to an online business model. Shortly after, a for lease sign was posted on the building, prompting the community to step in and save the studio. The center has returned to its historic home, owned and operated by local residents and members of the yoga community.

“Reopening the Center for Yoga in its original space is a tribute and testament to the generations of students, teachers and larger community who are an integral part of the center’s enduring legacy,” Board President Randy Paskal said. “Over the past several years, I have had the privilege to develop my personal practice in this amazing studio, and it is an honor to be part of the revival of the operations within our community and breathe life back into the center, a space that indelibly shaped the yoga community worldwide.”

Center for Yoga former manager Deb Anderson has returned as general manager, working alongside consultant Lisa Haase, who was the owner and director of the center from 2000-04. Senior Iyengar Yoga Instructor Lisa Walford started at the center in 1982, and has returned to her former home (she used to live above the studio) as an investor.

“To be a part of the reopening of the center is very special,” Walford said. “The center’s impact extends far beyond its physical space, into the Larchmont Village neighborhood, the city of Los Angeles and the broader yoga community. Reopening the doors is a symbol of unity, the power of will inherent in the practice of yoga, and a little bit of grace.”

Upon hearing about the closing of the studio, yoga instructor and teacher trainer Kim Fisch, who taught at the Center for Yoga for 14 years, was inspired to launch “Revolving Around the Center,” a documentary-style podcast about the center. It features interviews with friends, fellow teachers, students and staff members. The podcast continues as a celebration of the center’s continued legacy.

The Center for Yoga also plans to contribute to the financial wellness and social vitality of Larchmont Boulevard. The center is located at 230 ½ N. Larchmont Blvd. For information, a class schedule and membership, visit centerforyogala.com.