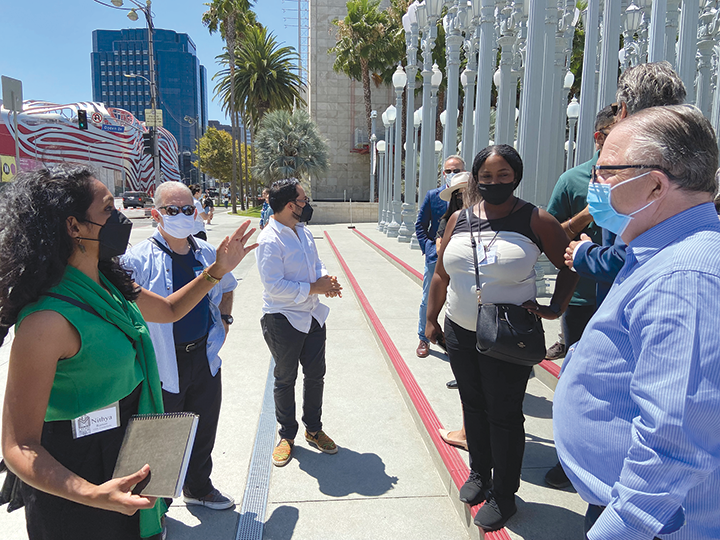 Los Angeles City Councilwoman Nithya Raman, 4th District, joined constituents and representatives of the business community on July 29 for a walk along Wilshire Boulevard organized by the Greater Miracle Mile Chamber of Commerce.

The walk began at the Los Angeles County Museum of Art’s “Urban Light” exhibit and proceeded east before reaching final stops at Cathedral Chapel School and Candela, a restaurant on La Brea Avenue. The group of approximately 40 people made stops along the way, offering people a chance to meet Raman. The walk was the first in-person event the chamber has held with the councilwoman, who was elected in November 2020. Raman previously met with chamber members in May via Zoom, since stay-at-home orders were in place that precluded in-person meetings.

“Over the next few months, what I want to be doing is meeting with more people in person. I think we have a district that has a lot of varied needs, and during COVID … city services were really diminished. I know a lot of residents are frustrated with the pace of improvements, with the pace of tree trimming and sidewalk repairs, and believe me, I am too. It’s just [that] we are coming back from a period when we were really, really diminished.”

Raman also addressed homelessness, including the Los Angeles City Council’s July 28 approval of an ordinance to clear encampments from sidewalks and public property. The new law bans camping on public spaces but requires outreach and other steps be taken to find people housing before encampments are removed. The City Council will also consider the removal of each encampment on a case-by-case basis before action is taken, adding a second layer of approval before tents are cleared. Raman, along with Councilman Mike Bonin, 11th District, voted against the new ordinance.

“We still have a lot to learn about how the city is going to be enforcing the ordinance,” Raman said. “What does the process look like, how are places selected, what happens when a resolution is passed for a particular area, how do L.A. Sanitation and service providers get involved? A lot of that is being determined now through a partnership with the CAO [chief administrative officer], and so I am trying to influence that process to try to make sure it happens in the most robust and sustainable way possible.”

Raman has proposed creating supportive housing or an affordable housing project on a city-owned parking lot at 728 S. Cochran Ave., across the street from Cathedral Chapel School, which has caused concern in the community. The school opposes the idea, as do some people in the surrounding neighborhood. Raman met with Cathedral Chapel School principal Tina Kipp and the school community during the walk to discuss the proposal.

Raman said the idea for housing on the lot is still in the early stages, and that nothing final has been decided. She added that there is plenty of time to still hear from the community and decide what may be the best use of the parking lot.

“We are trying to set up a tour of a facility that ideally is close to a school so that people can get a sense of how it works,” Raman told Kipp. “Because of COVID, some of the tours have been on hiatus, but we will reach back out and schedule that, and also schedule another conversation, so we can talk more about it. We are looking at other options too, such as purchasing an existing buildings and converting existing hotels. So we are not just pursuing this one option.”

Kipp said the parking lot is not a suitable location for homeless supportive housing because of its proximity to the school, and added that she is concerned the city will move forward against the wishes of the neighborhood. She hopes a public meeting will be held soon so concerns can be addressed. 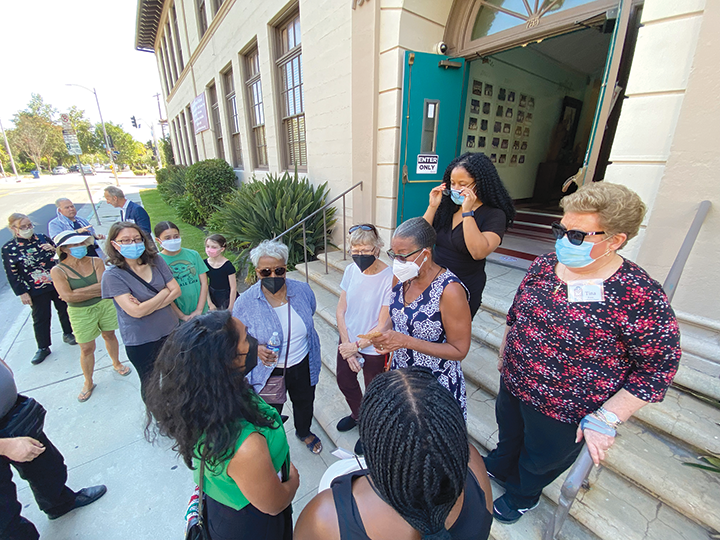 “We want people to be able to voice their concerns about having either permanent supportive housing or affordable housing across the street from the school. We have a large group of people who want to be heard,” Kipp said. “We are a Catholic school so we believe in helping the homeless, but we also believe in safeguarding our children. It is that delicate balance between helping those who are homeless and protecting our children.”

“It’s very disturbing to think they are talking about putting in a homeless shelter across the street from a school in a residential neighborhood that also relies on that parking,” Quine said. “Meanwhile, there are plenty of places in the city, and this CD 4 area, to build and refurbish buildings for homeless housing.”

Others said they understand the need to find solutions to help homeless individuals and thought the walk and the opportunity to meet with Raman was informative and beneficial.

“I wanted to hear what Councilwoman Raman had to say because she represents our neighborhood,” Miracle Mile resident Robert Brower said. “She’s got an uphill battle, so I feel for her. I hope she perseveres.”

Greater Miracle Mile Chamber of Commerce president Steve Kramer added that he was pleased to finally have an in-person event with Raman, and he hopes to continue hosting events that give the public and business community access to the councilwoman. He added, however, that the resurgence of the pandemic due to the Delta variant has caused uncertainty.

“It’s great to have the council member visit the street, take a walk with us and meet the various folks who constitute the Miracle Mile,” Kramer said. “It gives citizens a little more of an ability to contact and reach out to elected officials so they have a chance to meet them. I think the office is a lot tighter; they were new and they are settling in nicely, but times are what they are. What we can do right now is up in the air.”

National Night Out transforms into clinic

Raman, like most other LA City Council members, is a destructive communist who parades around under the term “progressive.” As in the city is getting progressively worse thanks to the homeless-enabling, gang-enabling, crime-enabling, illegal migrant-enabling, police defunding, keep-kids-out-of-school Marxism that has been destroying this state since around 2012. She deserves to be recalled along with Gavin Newsom and Mike Bonin (at least Garcetti is being shipped off to India soon). It’s not a Republican vs Democrat thing, it’s just common sense. We can turn this thing around with some smarter choices for our politicians that isn’t just about choosing a letter next to a name or identity politics.