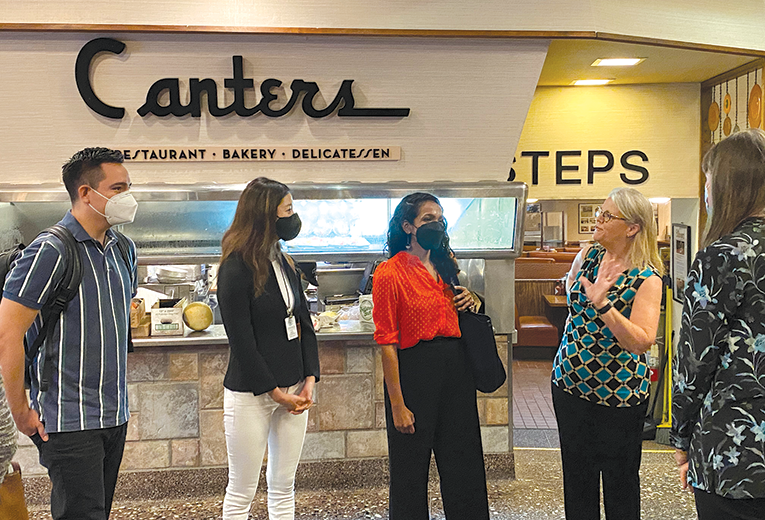 One common criticism of first-year Los Angeles City Councilwoman Nithya Raman, 4th District, is that she has not been responsive to neighborhood groups and other organizations in the district.

Seemingly looking to address that sentiment, Raman met with members of the Greater Miracle Mile Chamber of Commerce late last month, and she has spent the beginning of this week meeting with local groups.

On Aug. 18, she introduced herself to the Wilshire Rotary Club of Los Angeles during an early morning meeting at Canter’s Deli. Much of the discussion centered around homelessness in the district.

“This, for the first time, is approaching the scale [of funding] that we need,” Raman said. “But the problem is, we took so long to get to the place where we were actually spending the kind of money that we needed, that the problem is now overwhelming for residents. We’re in a tough spot. We really are.”

She said her “pathway to running for office” began with her looking to address homelessness near her home in Silver Lake. Now, her office has created a homelessness team comprised of three of her 26 district employees, Raman said.

“Their job is to make sure that all of the different service providers that cover these different regions of the district are communicating with one another,” the councilwoman added.

She said there are 73 homeless encampments in the district, and her office has discovered that some people experiencing homelessness have gone months without speaking to a service provider or government official.

“They’re really trying to make sure that outreach is happening regularly,” Raman said, adding that the path from an encampment to a home is long and complex. “You often have to get to know an outreach worker and trust that they’re here to help you.”

She said the complexities include obtaining a government-issued ID, filling out necessary paperwork, having access to health care and compiling everything needed to apply for housing, among other things.

“These are challenging vulnerabilities that can often make it harder to make those connections,” Raman said.

Rotary member Mark Benthien voiced his frustration with a homeless encampment between Crenshaw Boulevard and La Brea Avenue, north of Jefferson Boulevard. He said he frequently witnesses drug use and prostitution in the area.

“If I was doing that in my front yard, I would probably be arrested and charged,” Benthien said, adding that neighbors are routinely told by police that nothing can be done about the situation.

Although the individuals are committing crimes, arresting them would just make it more difficult for them to get interim or long-term housing, Raman said. She reiterated that her office is looking to fill the gap in services throughout the district.

“What we’re trying to do is fill in that missing piece, which is that gap,” Raman added.

Additionally, the councilwoman spoke briefly on commercial rent debt. She said much work has been done to help individuals at the local, state and federal levels.

“Not as much work has been done to help small businesses negotiate this period of increasing rent debt,” Raman said, adding that her office has asked city staff to explore the issue and see what tools the city has at its disposal.

She noted that she was supposed to address the Rotary club “a few months ago,” but it was “pre-vaccination,” she said.

“So I didn’t [attend], and so I’m glad to finally be here today, speaking to you,” Raman added.

The councilwoman also met virtually with members of the Hancock Park Homeowners Association on Tuesday night, when members voiced their frustrations with the Los Angeles Department of Transportation’s Fourth Street Neighborhood Greenway plan.

In a letter to members and neighbors, association President Cindy Chvatal-Keane pleaded with Hancock Park residents to attend the meeting.

“We have been waiting for her to respond for nine months,” she wrote. “We brought this issue to her attention in December 2020. Our request is simple: Will Nithya support the neighborhoods?”

Raman stressed that the LADOT effort is simply a study, and that it would not lead to any “immediate interventions.”

“The end goal of this particular study is not implementation,” she said. “There’s no funding for implementation in this project. It’s just a study. They are trying to use different data points to identify potential areas where there’s demand for walking and biking. It’s a citywide study. It’s not specific to this neighborhood or street.”

While Raman was “encouraged” by the association’s enthusiasm, she said she wanted to know why the residents did not support having the greenway plan’s infrastructure installed.

Resident Sheldon Larry said the plan is “misguided,” as it refers to Fourth Street as an active transportation corridor. He said there seems to be little concern about the stresses that the plan would cause the neighborhood.

Raman said she would take the feedback she received from the meeting and follow up with residents.

Raman added that she doesn’t want the residents to feel powerless.

“It’s just not the truth,” she added.

Chvatal-Keane said the association is still unsure as to whether the council member will side with Hancock Park residents on the greenway plan.

“We’re just trying to get clarification on that ourselves, because it would be nice to know if she supported the neighborhood definitively,” she said, adding that scheduling time with Raman has been difficult. “That’s been very tough. Again, I guess it’s a start.”

Funding is not the only issue, as the misguided leftist Raman knows. Fixing the homeless problem is quite easy: 1) make street encampments illegal, and 2) enforce #1. Stop enabling it. Stop rewarding all the homeless organizations that profit from it. Stop taking campaign contributions from the real estate developers who use homeless as the way to get waivers to build larger buildings in the name of affordable housing. Build large rehabilitation facilities (can be military-style camps) and force homeless to live in them. Don’t take no for an answer.

A lot of people claim that Raman is being unresponsive to the rampant crime, homeless encampments, and death of small businesses in her district. But that’s a mistake. Like most of the Democrats that have been systematically destroying the city and state and unleashing communism the past 10 years that failure IS the response. They aren’t overlooking the issues – letting it fester is the intended result. You can see Newsom and Biden doing the same thing. They are willfully destroying our country.