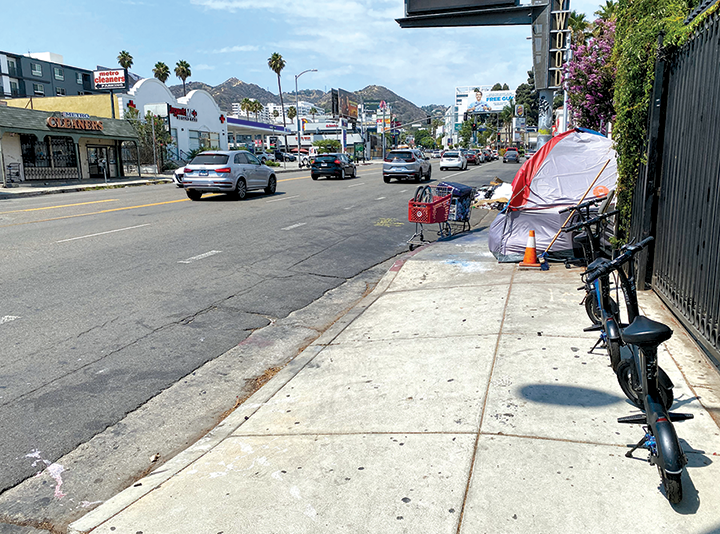 Electric bikes by Wheels add to the clutter on the sidewalk on La Brea Avenue in Hollywood. (photo by Aaron Blevins)

The first two months of West Hollywood’s dockless mobility pilot program for e-scooters and e-bikes have proven successful as the city tracked more than 25,000 trips in the first few weeks, though there are still some kinks to work out.

The 18-month pilot program began July 1 with three companies — Bird, Lime and Wheels — each providing 100 devices to be utilized throughout the nearly 2 square miles of the city.

In July, the city charted 25,507 total trips, with an average of 823 trips per day. The average user rode about 1.5 miles, and the busiest segment was the intersection of Santa Monica Boulevard and North Kings Road, near City Hall.

User numbers peaked at various times throughout the day, which showed many people are using the scooters to get to and from work and for recreational purposes on weekends, senior planner Rachel Dimond said.

“The utilization of this program has been astronomical,” Dimond added, stating that there are still several improvements to be made.

According to city regulations, riders must have a valid driver’s license or instructional permit to use the program. Additionally, only one rider is permitted on a bike or scooter at a time. Helmets also are required for users under 18.

The biggest challenge, though, has been keeping users off sidewalks. The program asks users to stay off sidewalks while riding, use bike lanes when available and when not, ride as far to the right of traffic lanes as possible.

Lt. Bill Moulder said all West Hollywood Sheriff’s Station patrol deputies have been made aware of the new program and are on the lookout for any illegal use.

Since the program launch, deputies have issued four citations: one for failing to stop at a stop sign, one for exceeding the speed limit and two for riding along sidewalks, an issue for which many city leaders say they’re receiving complaints.

“In the first couple weeks, the spirit has been focused on more of an education campaign to make people aware of the rules,” Moulder said.

Currently, there are 11 designated parking stations placed in high-use areas throughout the city. Councilmember John D’Amico said many of the stations are located on a sidewalk, which doesn’t encourage users to ride in the street.

“We don’t let cars start on the sidewalk,” he said. “I think if we can target putting the new locations in the street, it would at least give riders the suggestion that they’re supposed to stay in the street.”

Councilwoman Sepi Shyne questioned whether companies in the pilot program could monitor when a user was on a sidewalk and slow down the bike or scooter accordingly.

Dimond said the current pilot partners do not yet have that technology, though the city could look into adding another partner that does offer that capability. Currently, the city has about 300 scooters and bikes, but Dimond said it has the capacity for 400, so it could add one more company in the coming months.

“I think that technology really is the future,” Shyne said. “If they’re able to know when a scooter rider is on a sidewalk, I would expect that they would be able to slow them down to such a pace that it would deter them being on the sidewalk and also make it safer for pedestrians who are on the sidewalk so they’re not whizzing past someone.”

Since the start of the program, two collisions involving e-scooters have been reported. On July 7, a scooter operator collided with a vehicle at La Cienega Boulevard and Rosewood Avenue. On July 19, a vehicle operator hit a person riding a scooter. In both instances, minor injuries were sustained.

Once a ride is complete, users are allowed to park the devices in off-street locations that do not block pedestrian sidewalk access. Since the program started, the city has received 67 complaints, 51 of which were about blocked sidewalks due to parked scooters and bikes.

In a letter to city leaders, Manny Rodriguez, vice president of the West Hollywood West Residents Association, said users continue to ride and park on sidewalks, which “compromises pedestrian confidence” and continues to “junkify commercial districts.”

“Is it worth accepting this motorized danger and the junkification of our city by allowing these vending machines to operate on public property?” Rodriguez wrote. “I say no.”

The city has contracted with facility management company ABM, which also provides parking management services, to help manage the placement of the bikes and scooters. ABM responds to complaints about the program from 7 a.m. to 10 p.m. daily.

However, some city officials fear residents don’t have easy access to a complaint line. D’Amico suggested a sticker with the complaint number be added to the scooters and bikes used in the area.

Parking Operations Supervisor Coby Wagman said that the bikes and scooters don’t stop at city borders and often get shuffled throughout the greater Los Angeles area, so a sticker could cause confusion. Instead, he said vendors suggested a removable tag that could be taken off when a bike or scooter is deployed in another portion of Los Angeles.

Dimond said city staff is now working to create signage and incentives to encourage users to utilize the program properly.

Breathe in the fresh air in Beverly Hills