‘PAW Patrol’ is a crushing blow to imagination 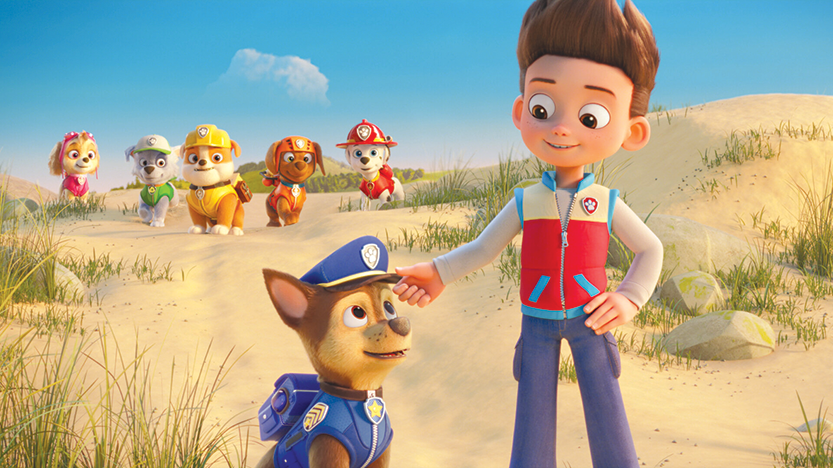 To call most children’s programming painful for those beyond the targeted demographic is hardly breaking news. Many shows across cable networks and even YouTube grow tiresome but still comprise a degree of educational value.

That’s not the case with “PAW Patrol,” one of Nickelodeon’s most popular kids’ shows and now a theatrical experience. On the small screen, the PAW Patrol dogs and their leader, a boy named Ryder (voiced by Will Brisbin in the film) protect Adventure Bay from a host of catastrophes, both natural and thanks to the maniacal mayor of Foggy Bottom, Humdinger.

All those puppies rock some enviable vehicles and personalized gear that allow them to effectively replace any local police, coast guards, construction workers, air traffic controllers, fire fighters and waste collectors. Their outfits also match those professions, though Skye, the sole girl pup, sports pink because the show is about as progressive as CBS’s James T. Aubrey on TV programming.

On the big screen, “PAW Patrol’s” differences are nominal at best: a different computer animation style that complies more with moviegoers’ expectations, a central plotline that surpasses the regular 12 to 24 minutes and deeper exploration of at least one character – in this case, German shepherd Chase (Iain Armitage).

The film attempts to pull at some heartstrings. As an even younger puppy, Chase was abandoned in Adventure City before becoming a kinda-cop superhero-lite dog for the PAW Patrol team, hence returning to that city once more to undo newly elected Mayor Humdinger’s (Ron Pardo) many mishaps in public office causes some self-reflection.

That’s the primary tension, along with shenanigans that eventually require all the team plus a new member, a dachshund named Liberty (Marsai Martin), to join forces. But the real shocker here involves a whole lotta familiar voices peppering each scene: Randall Park and Dax Shepard as a couple of goons arguing over who’s the “alpha,” Tyler Perry in a cameo role, Jimmy Kimmel’s news anchor Marty Muckraker, “Black-ish” and “Grown-ish” star Yara Shahidi as scientist Kendra Wilson and Kim Kardashian voicing a poodle.

It’s shameless, but no more so than its source material. Frankly, the show has always been an obvious way to usurp FCC restrictions on how much advertising can target young minds. Each season drops a new slate of vehicles and gadgets those pups employ to save the day, and soon after, all that stuff graces the shelves of a nearby Target.

(Pro tip: It’s all wildly expensive, so look to thrift stores, buy-nothing groups and Facebook Marketplace to get your kids all the figures and larger pieces they’ll plead for following any viewing.)

I know. It’s a show for children, and as long as it makes the littles happy, that’s a win. Perhaps. But that alleged redeeming value is slim. Sure, teamwork and believing in yourself can be helpful ideas, but that’s some low-hanging fruit. Compared to other programming – even from the same network – “PAW Patrol” doesn’t really try to give its demo much that will benefit anyone in the long run.

The film is actually a touch better, at least aesthetically. Plenty of TV series that transition to film across genres and target audiences – “Entourage,” “Sex and the City,” “The X-Files: I Want to Believe” – turn out worse. The animation here is better (but hardly compares to Pixar, DreamWorks or even Illumination). The story requires a touch more engagement. And the film’s cast is much more diverse, though both female pup team members still wear pink because, well, reasons, I suppose.

Like the show, the film serves little purpose. The small and big-screen iterations share much in common. They’re empty calories without visual personality.

“PAW Patrol: The Movie” certainly arrives at an opportune time, claiming second place at a healing box office, but it hardly feels like something meant for the big screen. Instead, it shares similarities with other special engagements never meant for wide release like a couple episodes of Marvel’s “Inhumans” on IMAX screens or “Star Wars: The Clones Wars’” movie-pilot in select theaters.

Still, my kids keep enjoying it, which means it serves a specific purpose; it’s an ace up the sleeve, a tool for use in desperate times, especially when temperatures outside rise higher and higher. Call it mediocre or the product of appeasing children at adults’ expense. I call it a Band-Aid.

‘PAW Patrol’ is a crushing blow to imagination - Toys Daily