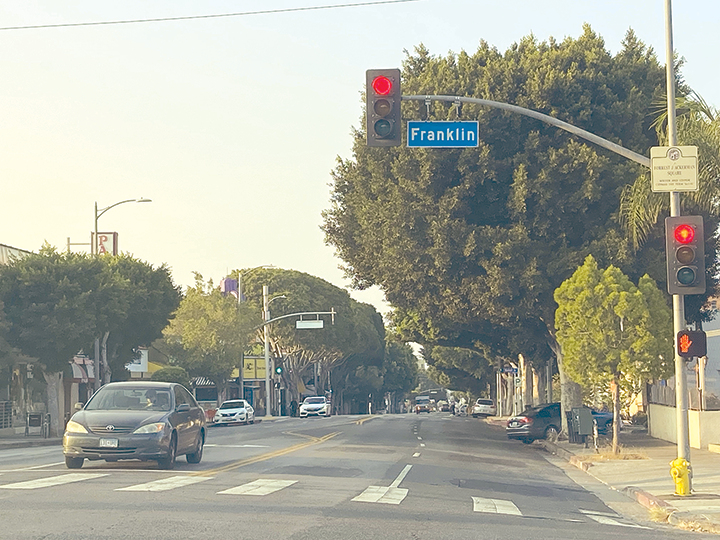 A passenger was killed when the driver of a Chevrolet Corvette crashed on Vermont Avenue, south of Franklin Avenue. Police believe the driver was traveling at 80 to 90 mph. (photo by Edwin Folven)

A 19-year-old man from Miami is facing gross vehicular manslaughter charges after he crashed a rented 2021 Chevrolet Corvette on Aug. 22 in the 1800 block of North Vermont Avenue, killing a male passenger and injuring a woman who was also in the two-seated sports car, police said.

The Los Angeles County Department of Medical Examiner-Coroner identified the deceased man as Dondre Curtis Arriola, 19, of Reseda. The injured female victim, who was also 19, was seated on Arriola’s lap when the crash occurred, said Officer Ed McGowan, of the Los Angeles Police Department’s Central Traffic Division. She sustained a broken pelvis, among other injuries, and remained hospitalized on Wednesday, McGowan added.

The collision occurred at approximately 8:10 p.m. McGowan said the Corvette was traveling 80 to 90 mph on Vermont Avenue, just south of Franklin Avenue, when the driver lost control and collided with five parked cars. The passenger who died was wearing a seatbelt, but likely sustained fatal injuries due to the female victim being on his lap and the force of the crash, he added.

“That’s why you don’t put anybody on your lap when you’re in a car,” McGowan said. “She was lucky. She didn’t have a seatbelt on, but he was holding her. Otherwise, she probably would have gone through the windshield.”

The driver, identified as Antonio Lopez Valdez, was not injured and was arrested at the scene. McGowan said he was booked for gross vehicular manslaughter, and authorities are in the process of presenting the case to the Los Angeles County District Attorney’s Office. Formal charges are pending.

“There was no DUI,” McGowan said. “It was just speed and driving too fast.”

McGowan said the collision is among many police have investigated since the beginning of the year that have occurred as the result of suspected speeding or reckless driving. He said he did not know what has led to the uptick in speeding and collisions but surmised it is related to films and television programs that feature fast cars, dangerous stunts and racing.

“It’s from the movies that these guys watch like ‘Fast and the Furious.’ They try to emulate them,” he added. “When we impound vehicles and they try to get them back, I tell them to contact Vin Diesel and these other guys to see if they’ll get their cars back for them. They just laugh, which makes me think there’s a connection.”

McGowan added that the Corvette driver’s inexperience in operating a high-performance vehicle may have also contributed to the crash.

“He’s lucky he didn’t hit and injure someone else,” McGowan added.

Anyone with information is urged to call investigators with the LAPD’s Central Traffic Division at (213)833-3713.

Teamsters endorse Melvoin for school board

Webinar offers resources on COVID-19 for people with HIV