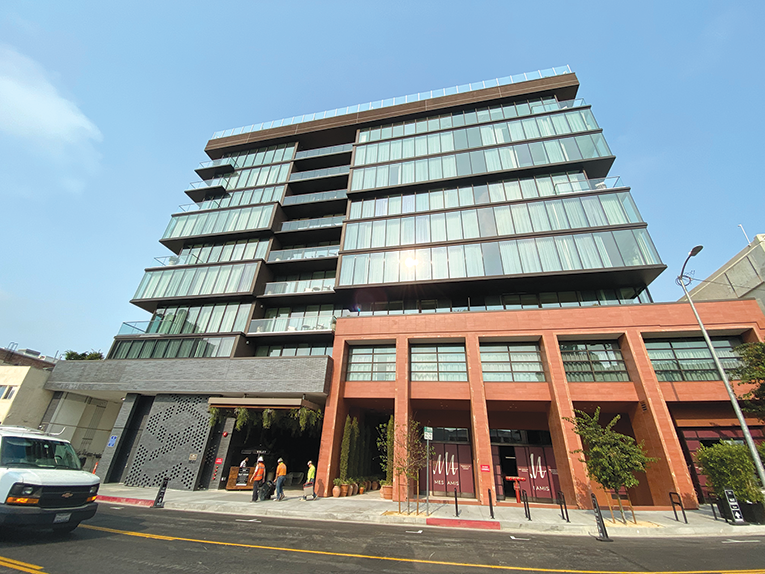 The 11-story Thompson Hollywood hotel opened on Aug. 8 at 1541 N. Wilcox Ave., bringing 190 new rooms to a neighborhood that is undergoing a transformation.

The hotel is located on Wilcox Avenue between Sunset and Hollywood boulevards, where other nearby developments include mixed-uses. The Hollywood and Wilcox project will include 260 multi-family residential units as well as office, retail and restaurant space. The Hollywood Arts Collective project will bring 151 units of housing for artists to Selma and Wilcox avenues, along with a performing arts space and galleries. Councilman Mitch O’Farrell, 13th District, supports the changes.

“As we recover from the pandemic, Councilmember O’Farrell is glad to see continued investments in Hollywood that will help even more people experience this historic neighborhood, while creating jobs and contributing to the local economy,” his spokesman, Dan Halden, said.

The Thompson Hollywood, which is part of the Hyatt Hotels Corporation, is a luxury lifestyle boutique hotel with mid-century-inspired guestrooms, including 16 suites. It also offers a restaurant by L.A.-based chef Lincoln Carson and the rooftop Bar Lis, which includes a lounge and pool with views of Los Angeles.

“Introducing Thompson Hollywood in one of Los Angeles’ most sought-after real estate market is a groundbreaking move for the hospitality brand,” added Grant King, managing partner of Relevant Group, which developed and owns the hotel. “This property not only perfectly sits at the storied intersection of the technology, media and entertainment realms, but will inevitably heighten Hollywood’s visibility as a coveted hospitality destination.”