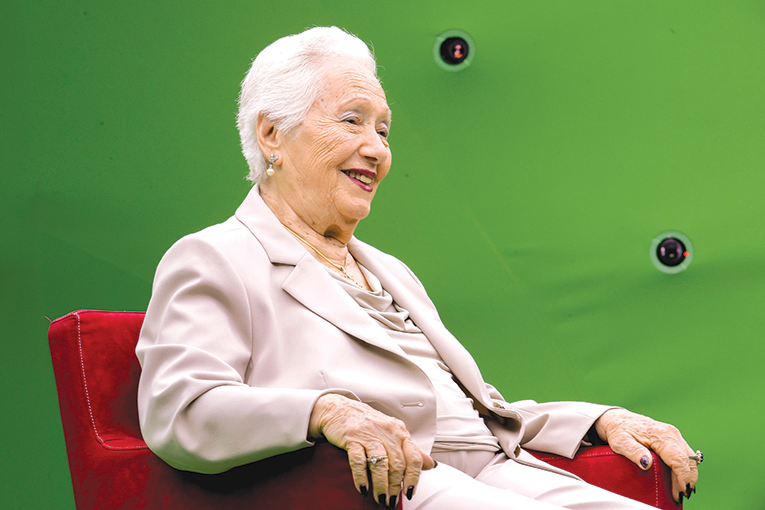 Holocaust survivor Renee Firestone was filmed by more than 100 cameras to create a hologram of her that answers audience questions. (photo courtesy of Holocaust Museum Los Angeles)

Holocaust Museum Los Angeles reopened on July 31 with the USC Shoah Foundation’s “Dimensions in Testimony,” a new permanent installation enabling visitors to have a virtual one-on-one conversation with a Holocaust survivor.

Firestone, a former museum board member, has been a dedicated speaker at the museum. Born Renee Weinfeld in 1924 in Uzhorod, Czechoslovakia, she is a survivor of Auschwitz. Firestone and other prisoners were liberated in 1945. After the war, she returned to Prague where she married Bernard Firestone and gave birth to a daughter.

The Firestones moved to the United States in 1948. She became a successful fashion designer whose pieces are now part of the Los Angeles County Museum of Art’s permanent collection. She has been honored with a leadership award by the United States Holocaust Memorial Museum and has appeared in multiple Holocaust documentaries.

“Dimensions in Testimony” was developed in association with the Illinois Holocaust Museum and Education Center, with technology by USC Institute for Creative Technologies. Firestone was filmed by more than 100 cameras as she answered questions. Computer technology enables a holographic image of Firestone to answer the questions based on key words and phrases.

“Our museum was founded by survivors who wanted to share their stories publicly and educate the next generation,” CEO Beth Kean said. “With ‘Dimensions in Testimony,’ countless future generations of visitors and students can hear those stories from the survivors and learn directly from those who were there, even when they are no longer with us.”

Enhanced health and safety protocols have been implemented for in-person visits, and advance reservations are required. Face coverings and physical distancing are also mandatory.

Holocaust Museum Los Angeles is located at 100 The Grove Drive. For information call (323)651-3704, or visit holocaustmuseumla.org