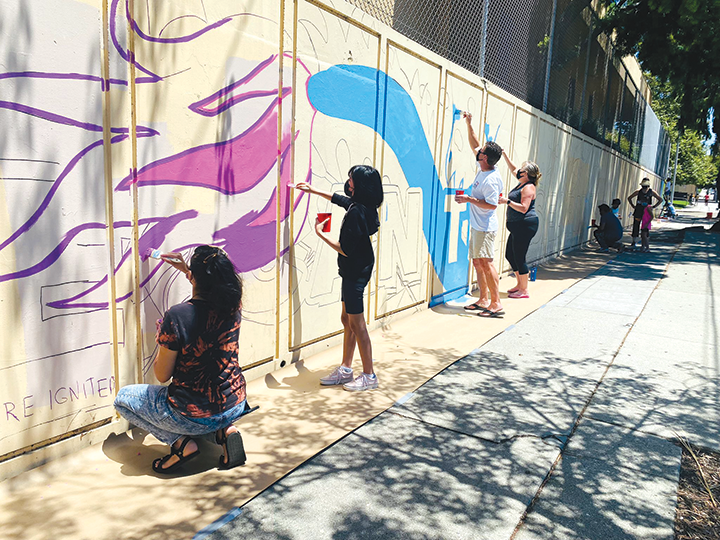 Students began painting the mural at Dayton Heights Elementary School. The artwork is scheduled to be unveiled on Aug. 16. (photo courtesy of Arts Bridging the Gap)

The group also included community members, representatives of the local nonprofit Arts Bridging the Gap, and artists Ethel and Carlo Zanfranco. Titled “Hybrid,” the mural covers the entire south-facing exterior of the school and was designed by the 2019-20 5th grade students at Dayton Heights Elementary School and Arts Bridging the Gap. The Zanfrancos created the final design and led the painting project.

The vision for the mural came from O’Farrell’s office, which wanted to bring a positive and meaningful project to the school. The campus is located in a community historically overlooked for artistic experiences and beautification efforts, he said.

O’Farrell participated in online design sessions hosted by Arts Bridging the Gap and shared stories about his artistic background with the students and parents, encouraging them to explore their creative interests. The sessions helped the students and parents connect with each other and express their feelings about the challenges of the pandemic. The students shared ideas and themes and drafted designs that were incorporated into the final mural.

The mural also features an important message for the students and the community. “Once upon a very difficult time, students had to adapt to a different way of living and learning. A change was needed, and our old ways were unfurling,” the mural reads. “Though we pushed through in environments that were isolated, we pushed together in a spirit united.”

The mural is expected to be unveiled on Aug. 16 at the conclusion of the first day of the new school year. For information, visit cd13.lacity.org.

Students placed on a pathway to success when returning school