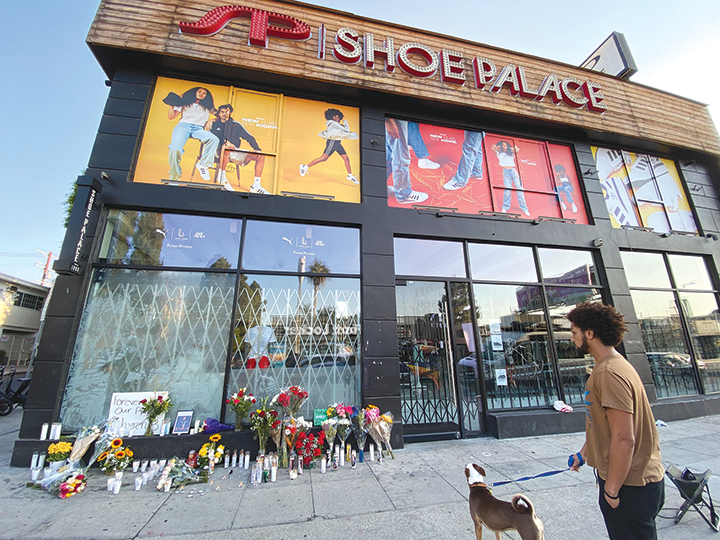 West Hollywood resident Drew Fonteiro expressed concern about a homicide at a memorial for the victim in front of Shoe Palace on Melrose Avenue. (photo by Edwin Folven)

Community members in the Melrose District are calling for more to be done to ensure public safety after a 26-year-old man was shot and killed on Aug. 11 after he intervened in an argument in front of a shoe store where he worked, authorities said.

The victim, Jayren Bradford, had just arrived at Shoe Palace, located at 7725 Melrose Ave., when he saw a group of men and women arguing in front of the store, police said. Shoe Palace was holding a raffle and a large group of people had assembled on the sidewalk in front of the business at the corner of Melrose and Genesee avenues.

When Bradford intervened at approximately 12:30 p.m., members of the group turned on him, police said. A male suspect pulled out a gun and fired once, killing Bradford.

Detectives with the Los Angeles Police Department’s West Bureau Homicide Unit investigated the murder and arrested a 16-year-old male suspect the following day in the 8100 block of State Street in the city of South Gate. Witnesses provided a license plate number for the suspect’s vehicle and security camera footage was used to identify the gunman, police said.

Melrose Action Neighborhood Watch co-founder Peter Nichols called the shooting “a tipping point.” The murder was the fourth homicide in the Melrose District since last December, and one of multiple shootings and robberies that have occurred in the area. Police have solved the other murders, which were unrelated, and suspects in those cases have been arrested. However, Nichols said more needs to be done.

“It’s incomprehensible. It has caused a high level of anger, anxiety and frustration,” Nichols said. “I could have never imagined this area would be experiencing this kind of problem, but I must emphasize, I’m not surprised. It [represents] the dangerous climate that exists here.”

The Melrose Action Neighborhood Watch held a virtual meeting on Aug. 17 to discuss the murder and steps organizers hope will be taken to further reduce crime. Capt. Sonia Monico, commanding officer of the LAPD’s Wilshire Division, said she could not provide details about the case against the juvenile gunman accused of killing Bradford because of ongoing court proceedings, but said camera footage was key to making the arrest. She said crime in the Melrose area is a major focus for the Wilshire Division, and extra resources and patrols have been assigned to the area. That includes bike patrols and undercover operations, as well as officers assigned to different parts of the division who have been asked to patrol the Melrose corridor when not answering other calls.

“This incident is very unfortunate,” Monico said. “I cannot go into the case itself, but I’d like to say thank you to the community. There was a lot of community video that is crucial for solving these cases. It was instrumental in providing us with information and leads for the perpetrator involved in this case to be apprehended.”

“Officers are definitely out there,” added Senior Lead Officer De’Antraye Dantzler, who is assigned to the Melrose District. “It’s actually the one spot where we have most of our resources assigned.”

Nichols agreed that the police department is taking steps to address crime, but said city officials are not doing enough to address the problems in the Melrose District. The Melrose Action Neighborhood Watch has posted a petition online calling for city leaders to do more. As of Aug. 18, the petition had more than 850 signatures.

The Melrose Action Neighborhood Watch is calling for the city to temporarily ban e-scooters in the Melrose District, which Nichols claimed are contributing to the crime problem by giving suspects an easily accessible and disposable form of transportation. He also called for a temporary ban on sidewalk vending, which he said attracts a criminal element. The organization is also calling for the city to present a comprehensive plan for addressing crime in the Melrose District that may include limiting the types of businesses that can be located in a specific area or zone, as much of the concern centers on shops that sell sneakers, Nichols said. The Melrose Action Neighborhood Watch is also asking for more reserve officers to be stationed in the Melrose District to provide an extra deterrent.

“What we are asking for from the City Council is relief, temporary bans on so many of these issues to bring order to the disorder that we feel we are seeing in this community,” Nichols said. “We are not blaming anybody. We are just asking for action.”

Greg Martayan, director of public safety for Los Angeles City Councilman Paul Koretz, 5th District, said the city is exploring the possibility of creating a “no go zone” for street vending in the Melrose District, and the councilman supports a ban on e-scooters and e-bicycles in the area. He added that Koretz and his staff have also met with top LAPD officials and are working to bring more police resources to the district.

Koretz praised the LAPD for making a quick arrest in Bradford’s murder and said he is committed to doing everything possible to address crime in the Melrose District. 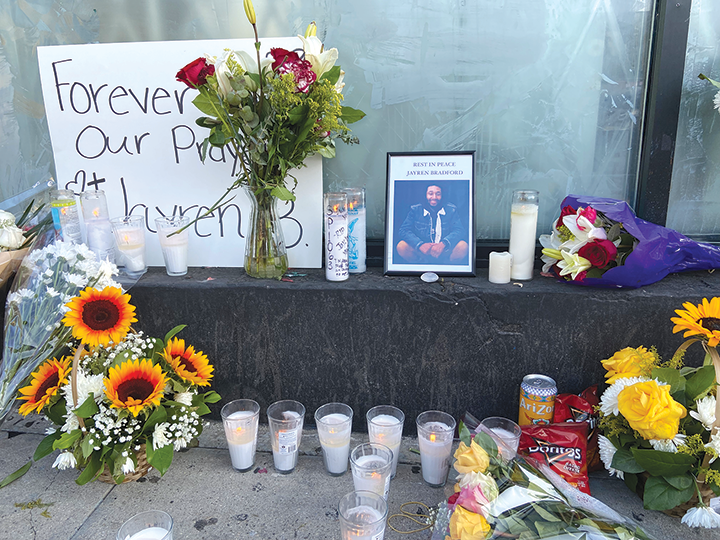 “We’ve been focusing on safety and security in the Melrose corridor area with the LAPD. We’ve found that most of the incidents have been connected to suspects and gang members who are coming in from outside the area and we are very focused on preventing these kinds of violent incidents,” Koretz said. “I have met with [LAPD] Chief Moore on several occasions and pushed for more response. We are definitely trying to prevent crime. Our senior lead officers have been very visible and have been working with the Melrose community and the Melrose BID. We are doing anything and all things we can think of. We’ve deployed very visible patrols and have more LADOT traffic control officers walking the neighborhoods. We did everything we could to be visible and make it clear out there that illegal things won’t be tolerated.”

Nichols added that he is looking forward to working more closely with the LAPD and the city to stop the crime and violence, and hopes the petition will spark further action. He also called on people to stand in solidarity against crime and sign the petition by visiting melroseaction.org.

“We need substantive ideas on how we can stop this,” Nichols added.

For West Hollywood resident Drew Fonteiro, who stopped by a memorial for Bradford outside Shoe Palace on Aug. 12, the changes can’t come soon enough. He called Bradford’s murder senseless and said more must be done to stop violence.

“We are all shaken by this,” Fonteiro said. “I think there is a lot unrest in this neighborhood and the city. It’s tragic. It has to stop.”

Driver sought for hit-and-run in the Hollywood Hills

‘The Walking Dead’ is anything but lifeless

Of course there are a lot of dog whistles in the quotes, but in today’s woke political and cultural climate it’s unfortunately necessary. But I’m glad that sneaker stores are being singled out as one of the obvious issues. You can figure out the rest.