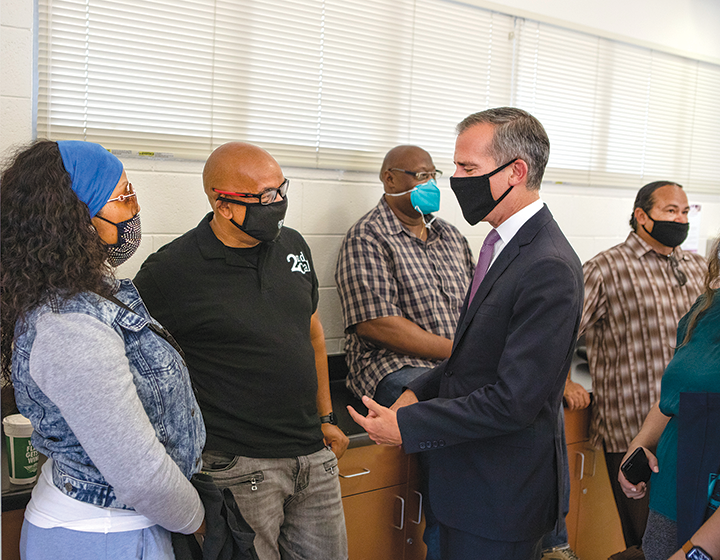 Los Angeles Mayor Eric Garcetti recently spoke with the newest recruits in his Office of Gang Reduction and Youth Development. They included intervention workers in the Peace Ambassadors program who work to reduce violence through community-led engagement strategies.

The mayor was joined by members of the City Council at the South L.A. Sports Activity Center, where new peace ambassadors are receiving training in violence de-escalation.

“Strengthening the human bonds in the neighborhoods we serve is essential to public safety, and that work starts by empowering the people who have earned the trust of their community,” Garcetti said. “Keeping people safe isn’t just a job for law enforcement, it’s a shared responsibility for all of us. That’s why we’re making unprecedented investments in alternatives to policing that reinforce our commitment to a community-based approach to reimagining public safety.”

Last year, Garcetti added 40 new intervention workers to the Peace Ambassadors program, and doubled that number in his Justice Budget, which took effect this month. Peace ambassadors conduct outreach in their neighborhoods and support proactive peace-making activities, such as monitoring crime hotspots and hosting small outdoor events to foster conversation. Each ambassador is mentored and supported by an experienced GRYD community intervention worker, who were also present for the violence de-escalation training.

“A key priority in 2019 was to transform public safety by implementing community-based solutions that keep residents safe without over-policing,” said Councilman Marqueece Harris-Dawson, 8th District. “This is exactly what we did through the South L.A. Community Safety Initiative. It champions an unarmed crisis response to mitigate violence in our parks and neighborhoods. Placing trained [community intervention workers] in our neighborhoods has empowered residents and created a more peaceful environment. I’m delighted that the mayor has decided to fund this program.”

Garcetti’s Justice Budget lays out a progressive vision for a more equitable and just city, and includes unprecedented spending on models for unarmed crisis response. It includes $18.7 million for Therapeutic Unarmed Response for Neighborhoods program, a public safety model that dispatches mental health and outreach workers to some 911 calls for assistance that do not involve violence, and $33 million to expand GRYD programming.

“Mayor Garcetti’s commitment to making new and impactful investments in alternatives to policing is showing the way forward for cities across America,” said Aqeela Sherrills, executive director of the Community Based Public Safety Collective. “GRYD is a proven model, and putting more of those resources into our communities will save lives.”