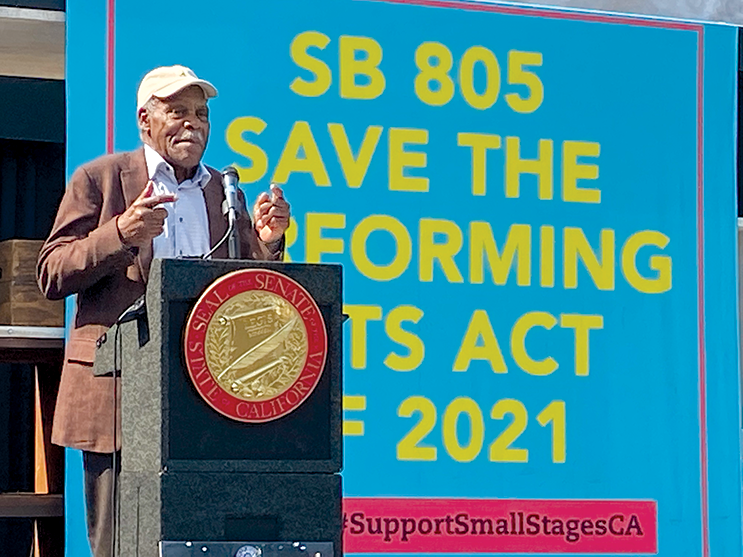 In addition to the $50 million, the group called for additional support for theaters with Senate Bill 805. They gathered on the Fountain Theatre’s outdoor stage in East Hollywood to also raise awareness about the legislation authored by Rubio that would provide grants for payroll and employees at small theaters statewide. The total amount of funding in the program has not been finalized. The legislation is currently pending in the California Assembly.

“It’s great honor to stand in support of small theaters,” Rubio said. “We are [celebrating] a historic milestone in the theater community, and that is $50 million dedicated for immediate funding for theaters that have stayed closed during this pandemic. We cannot dismiss the value that small theaters bring to our communities. I can say with certainty that they save lives, they provide a pathway to opportunities.”

Rubio added that theaters employ and support people from all walks of life, including many from disadvantaged neighborhoods and communities of color. SB 805 will support small theaters, which often struggle financially to keep their doors open during regular times, much less in the aftermath of a global pandemic, Rubio added.

“SB 805 is a long-term solution,” she added. “It will create a paymaster that will help small community theaters with payroll services [and] cut down on overhead.”

O’Farrell stood in support of SB 805 and cited relief for small theaters that he introduced in the Los Angeles City Council, which led to a $130,000 fund that provided $5,000 grants to small venues during the pandemic. He said the governor’s allocation builds upon that effort, and SB 805 is the next step in creating long-term stability for theaters.

“When I first moved to Los Angeles in ‘82, I was a member of two different theater groups and over a 10-year span, I did many plays on what is now Theater Row. I feel pretty strongly that experience of doing several plays back in the day and making my living as a professional actor-dancer-singer helped shape my ability to be effective on the Los Angeles City Council,” O’Farrell said. “There is no doubt in my mind that shaped my abilities to be able to deliver victories and successes on behalf of the residents of Los Angeles because I still have an artist’s point of view in my approach as a legislator. Let’s contact all of [Sen. Rubio’s] colleagues in the Assembly and Senate to make sure that across the state, these legislators get the message that SB 805 is vitally important to the arts and live theater, not only in Los Angeles, but across the state of California.”

The legislators were joined by members of theater companies based in Los Angeles including Josefina Lopez, founding artistic director of the CASA 0101 Theater Group, and Ben Guillory, co-founder and CEO of the Robey Theater Company. Glover, and actress Kirsten Vangsness, reiterated the importance of theater and its impact on society.

“We cannot transform our communities without art,” Glover said. “It is essential. We have known it all the time. Artists are the gatekeepers of truth … and we are here to tell our assembly members, to tell our state senators, that we want more. Yes, we thank Gov. Gavin Newsom for his bold initiative to supply $50 million to struggling community arts program, but we need more. Artists have to be the foundation of building a new world. Artists are going to lead the way, like they have always done.”

Vangsness, known for her role on the television show “Criminal Minds” and as a member of Theatre of Note, a small theater company based in Hollywood, said SB 805 is critical to the future of the craft.

“I am a product of California. Public school, community college, Cal State Fullerton, no money, student loans, all the things,” Vangsness added. “Theater was my acting school. Theater was my community. We need our small spaces. We do this because it’s important to tell those stories. We are not a luxury, we are a need, period.”

O’Farrell also challenged lawmakers to support the arts and the small theater community.