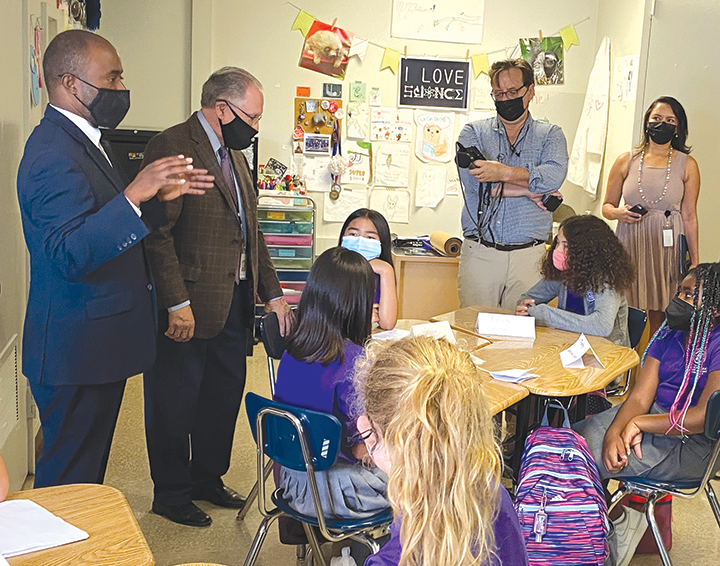 “There’s no movie made about me,” Melvoin told the class, referencing the 1986 TV film made about McKenna. “But I did do a TikTok video, though.”

He told the students that he was a seventh-grade teacher in the district before he became an LAUSD board member.

“What I would have given to have no boys in my class,” Melvoin said, drawing giggles from the all-girl classroom.

Following the classroom visit, the group of educators honored two district employees — Stephon Dias and Jaime Corral — who drove to Sacramento to pick up approximately 105,000 Rapid Antigen COVID-19 tests on Aug. 12 and bring them back to L.A. before the beginning of school.

Reilly referred to their efforts as the district’s “own Iditarod.” She thanked Thurmond and his staff for making them available, which enabled the district to train nurses on how to administer the test prior to the first day of school.

District officials fielded questions from the media. When asked about long lines for testing and reports of technical difficulties with wellness checks, Reilly acknowledged the problems and said the district was pleased to have so many students back. She said the first school she visited on Monday had 95% of its students return.

“Yes there were lines, but the protocols we put in place were to ensure our students safety,” she said, adding that the parents she spoke to were understanding about the situation. “I think the volume of students coming back has been a really gratifying thing, not necessarily a negative thing. We’ll work to make it better, but I think everyone understands that this is a year unlike any other year. So it is unprecedented as we get our students back in school .”

Reilly added that the district will “review everything that happened today” and make adjustments as necessary.

“We’re all learners here. … I think today has been an amazing day.”

Thurmond noted that the district is the largest in the state and that preparing for the school year in the midst of a resurging pandemic was a “massive undertaking.” He said the state will take feedback and figure out ways to mitigate issues.

“I also believe this is Day One, and to have a significant number of families come back is so important,” Thurmond said. “We will work through those things, and sometimes there are snags.”

“Yes, it’s going to take some time to smooth out rough edges, but we’re in a pandemic,” he added. “There is no playbook on how to do this.”