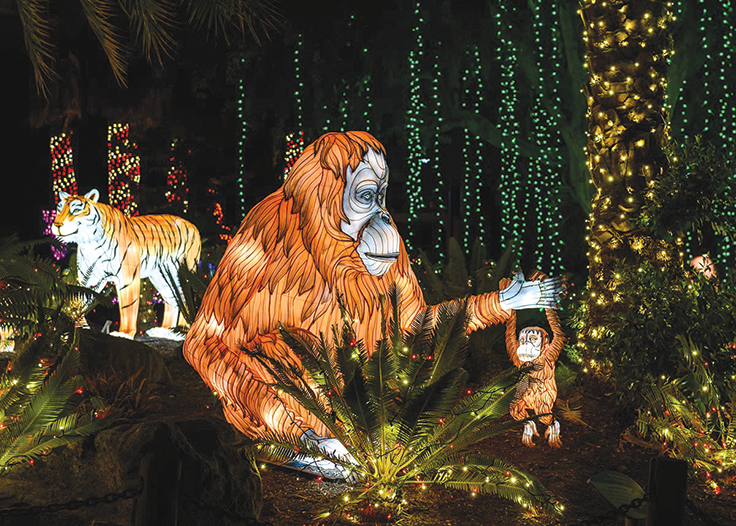 The Los Angeles Zoo’s seventh installment of Zoo Lights will not be held in 2021-22 after its fundraising arm encountered “unreasonable demands” from the city and zoo Director Denise Verret while planning the event, according to a letter from the Greater Los Angeles Zoo Association.

In the Aug. 17 letter, which was addressed to Mayor Eric Garcetti, several council members and other city officials, GLAZA president Tom Jacobson said the event, which was not held last year due to the pandemic, would again be canceled this year.

“Sadly, city-initiated delays and demands have made it impossible for GLAZA to produce a successful, first-class Zoo Lights experience in 2021-22,” he wrote.

According to the letter, GLAZA officials in April requested the ability to deduct this year’s Zoo Lights marketing costs from its event revenue, but the city denied the request.

Then, GLAZA officials learned that zoo and Los Angeles Police Department staff overtime would require approval from the zoo and city – a first since the event’s inception, the letter states.

Jacobson wrote that the new requirement to have overtime approved was linked to the city’s unwillingness to discuss the winter event until GLAZA paid the city $410,000 in marketing expenses deducted from the revenue from the 2019-20 event.

After GLAZA paid the “disputed amount” in June, officials learned that the city would require a special legal agreement for the 2021-22 iteration of the event – another first for Zoo Lights, the letter states. Jacobson wrote that Verret gave GLAZA the draft agreement on Aug. 6 but refused to incorporate some of the alterations GLAZA officials proposed.

He wrote that the agreement was “highly restrictive” and required Verret’s approval for staffing, production schedules, private events and any funding reallocations related to Zoo Lights 2021-22, which were “unprecedented.”

“We indicated that we would not accept the city’s changes, but in a good faith effort to reach an agreement, GLAZA extended our original deadline for receipt of an acceptable agreement from Aug. 6 to end of day on Aug. 9,” the letter states. “The city attorney responded on August 10 that they were unwilling to make any additional changes to the agreement – a true ‘take it or leave it’ offer.”

At that point in the process, GLAZA would be subject to “financial and reputational risk” if the organization continued to plan the event, Jacobson wrote. The letter states that its cancellation would lead to a revenue loss of $1.8 million to the zoo, as well as a loss of jobs and, “most unfortunately, a loss of this beloved holiday tradition” for the L.A. community.

“Attempts by the city and the zoo director to exert oversight of the Zoo Lights program, its operation and budget were not only inappropriate but also completely out of character from past city involvement in Zoo Lights,” Jacobson wrote. “Contrary to statements made by the city, GLAZA bears no responsibility for any taxpayer funds. The money consumers spend to attend GLAZA-produced events … is no different from money consumers choose to spend at museums, restaurants or movie theaters.”

The letter states that the city’s demand to allow Verret, who has “little to no experience” managing events like Zoo Lights, would force GLAZA to abandon its “organizational integrity” and its board to “breach their fiduciary duty.” Jacobson wrote that the effort was an “apparent” attempt to “elbow GLAZA out of its leadership role.”

On Aug. 24, Jacobson did not elaborate much further. He said the organization has had a 58-year relationship with the zoo, and that both entities work diligently to provide great experiences for patrons of the zoo.

“I think the letter speaks for itself,” Jacobson said.

While the letter seems to indicate that the relationship between GLAZA and the zoo has soured, both continue to work together on programs and projects that will be implemented as long as the pandemic’s impacts continue to wane, he said.

“We are doing that – planning events for the fall – as we speak,” Jacobson added.

Representatives of the Los Angeles Zoo did not respond to a request for comment by deadline.

The zoo is located in Council District 4. Representatives of Councilwoman Nithya Raman did not respond to a request for comment.