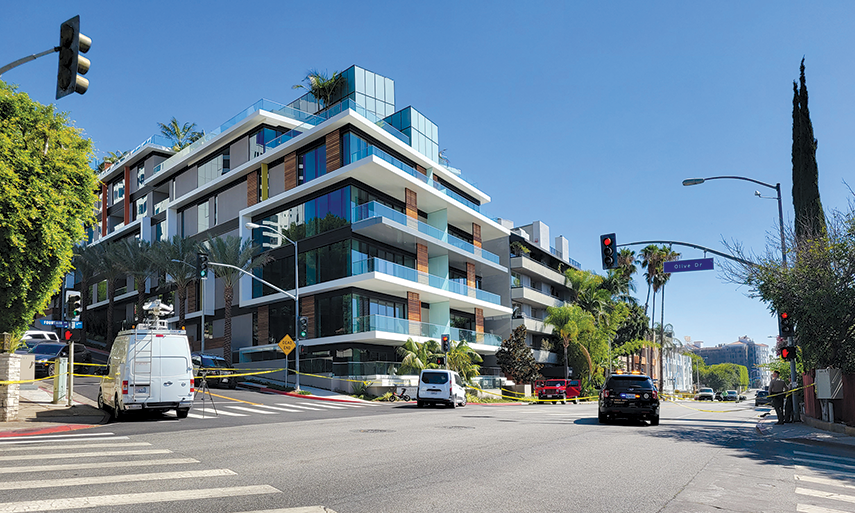 Sheriff’s deputies closed Fountain Avenue from La Cienega Boulevard to Kings Road on Friday as they investigated the shooting. (photo by Brynn Mechem)

Detectives investigated the shooting throughout the day on Aug. 27 and determined it occurred during an alleged robbery.

One of the men robbed the other three men at gunpoint, said Detective Omar Luevano, of the West Hollywood Sheriff’s Station. A struggle occurred between the victims and suspect, who fired multiple times. During the struggle, the alleged perpetrator was also shot with his gun, Luevano added.

All four men were treated at a hospital for non-life threatening wounds. The alleged gunman was arrested on Aug. 27 and booked for robbery, assault with a deadly weapon and attempted murder, Luevano said. The case will be presented to the Los Angeles County District Attorney’s Office on Aug. 31.

Luevano said the victims are visiting Los Angeles from out of state, and investigators believe the suspect followed them from Hollywood to the location where the alleged robbery occurred. The detective did not identify the suspect, but said he is in his 20s and is a resident of Los Angeles. The victims were also in their 20s, he added.

West Hollywood Sheriff’s Station deputies received reports of multiple shots being fired at the intersection of De Longpre and Fountain avenues and found three victims suffering from gunshot wounds. While searching the area, police found another man who had been shot on Kings Road, less than one block from the other victims.

No further description was provided of the two suspects.

Anyone with information is asked to call the West Hollywood Sheriff’s Station at (310)855-8850.

This story will be updated as more information becomes available.