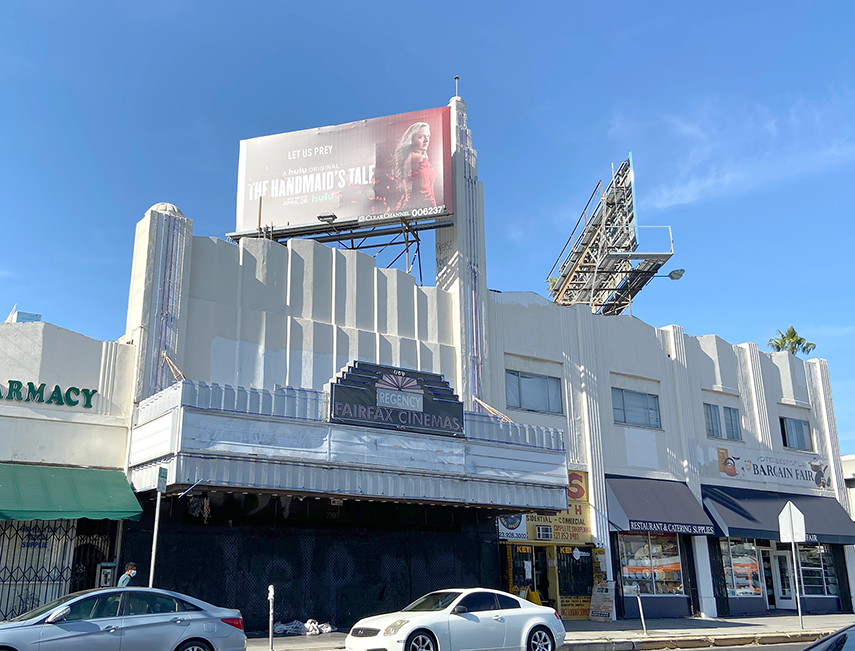 The Los Angeles Cultural Heritage Commission voted to recommend the Fairfax Theatre as a historic-cultural monument. (photo by Edwin Folven)

After four months of review, the Los Angeles Cultural Heritage Commission voted on Aug. 5 to recommend the Fairfax Theatre as a historic-cultural monument. The Los Angeles City Council’s Planning and Land Use Management Committee will next review the application for historic-cultural monument status at a date to be determined, and will forward its recommendation to the full City Council for final consideration.

The long-vacant Fairfax Theatre, located on Beverly Boulevard just west of Fairfax Avenue, remains boarded up and empty. The building’s owner, B&F Associates, has city approval to build a 71-unit housing complex at the site, and the entitlements last through 2024.

Those approvals already require the owner to preserve the theater’s marquee and Art Deco tower, which remain intact on the front of the building. Whether or not the City Council grants historic-cultural status to the theater building, it will not affect the owner’s right to build the housing project. However, a historic-cultural monument designation would preclude the owner from embarking on any other project at the site without going through the city planning process again and conducting a new environmental review.

The Los Angeles Cultural Heritage Commission’s recommendation came six days after the State Historical Resources Commission recommended that the 1932 Fairfax Theatre building be placed on the National Register of Historic Places. Because the owner opposed historic designation due to the former theater building being significantly altered over the years, the building will not be placed on the national list. But, if the owner tries to complete a different project at the site than what has already been approved by the city of Los Angeles, it would trigger further review at the state level.

Preservationist Steven Luftman, who filed the application for historic status with the city and state, said he is optimistic it will be approved by the City Council. Luftman conducted extensive research that he said determined the Fairfax Theatre was at the center of the Jewish community during an important period for the Fairfax District and city of Los Angeles. Community meetings, religious services and special events were held at the theater at a time when the first synagogues were being built in the neighborhood. Luftman hopes the owner will have a change of mind and devote the building as a center for the arts.

“We are hoping the owner can see how important it is to the city,” Luftman added. “There is a great opportunity for another adaptive reuse. I remain optimistic. I see it as a starting point for finding another use than luxury condominiums.”