Council approval lights up The Strip 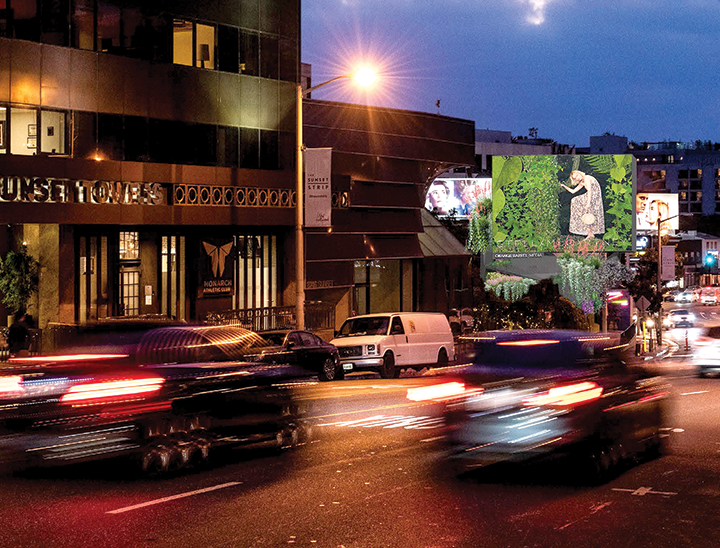 Construction on the billboard at 8752 Sunset Blvd. is slated for late this year or early 2022. (rendering courtesy of the city of West Hollywood)

More than 20 years since the Marlboro Man was snuffed out on the Sunset Strip, the thoroughfare will receive a new bulb in its iconic array of lights after the West Hollywood City Council unanimously approved an innovative billboard to be installed near Sherbourne Drive.

According to a staff report, the “Standing Meadow” project, which incorporates landscaping and internal lighting, should provide the city more than $10 million in revenue over the course of its development agreement.

The billboard was “processed under” the city’s Sunset Boulevard Off-Site Signage Policy, which was passed in 2019 to “integrate off-site signs, entertainment and public art,” the report states. West Hollywood Chamber of Commerce President and CEO Genevieve Morrill told the council it does just that.

“We enthusiastically support this [Orange Barrel] Media masterpiece,” she said, adding that the project will help energize that area of the boulevard. “It’s marvelous, and I cannot wait to see what our other creative companies will put forth.”

Morrill said the sign “stands alone” and is “small, static and dynamic in delivery.” She also noted the billboard’s green elements. According to design documents, the project will include a “green wall system” constructed of irrigated planter boxes, as well as an irrigation pump and wastewater lines.

Mayor Pro Tempore Lauren Meister said she is excited to see the billboard “become something special.”

“It really embodies what we had hoped for with the Sunset signage plan,” she added. “I love that they’re using green space in there.”

The staff report states that the current sign, which is located just west of the Eveleigh, was installed in the early 1960s. Its replacement has a sign face area of 532 square feet. The overall billboard height was reduced by 10 feet after the West Hollywood Planning Commission reviewed the project, according to the report.

“This is a stunning billboard,” Councilwoman Sepi Shyne said. “It encompasses everything that our billboard goals and new vision is about.”

Mayor Lindsey Horvath asked her colleagues to consider expediting the installation of end road lights at the crosswalk at that intersection. The council agreed.

“I don’t know if you’ve ever tried to cross at that light at Sherbourne and Sunset, but It is a challenge to begin with,” she said.

Construction of the billboard could begin later this year or in early 2022.

Back to school for Beverly Hills Unified