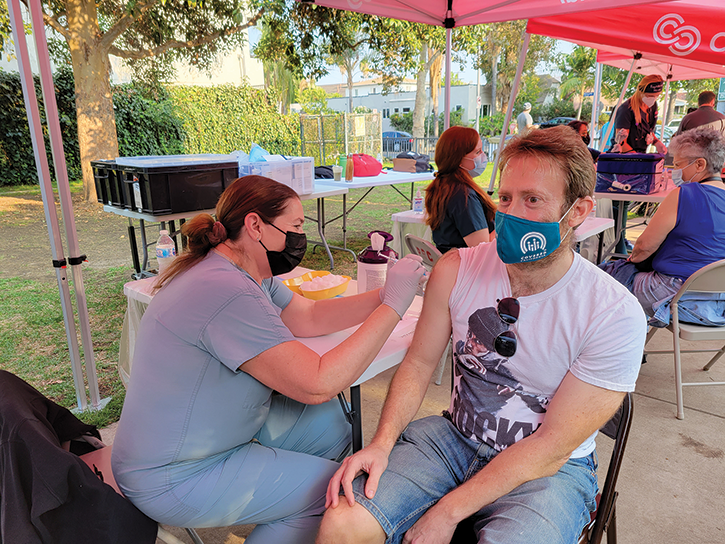 As stricter guidelines requiring patrons to show vaccination status before entering businesses are being implemented throughout the state, local city governments are looking to do the same.

Facing concerns with the growing number of COVID-19 variants and the slowing rate of vaccinated residents, officials for Beverly Hills and West Hollywood are looking for ways to encourage more residents to get vaccinated.

Los Angeles County data through Aug. 19 shows there are more than 6.2 million people ages 12 and older throughout the county who have received at least one dose of a COVID-19 vaccine.

Still, city leaders are hoping to reach a near-100% vaccination rate to ensure the well-being of the communities.

One solution frequently discussed among city leaders is requiring proof of vaccination status to enter restaurants, bars, gyms and other businesses where a patron may remove their mask for more than 15 minutes. Additionally, city leaders discussed requiring employees of such businesses to be fully vaccinated.

The Los Angeles City Council directed the city attorney to draft an ordinance requiring patrons to have at least one dose of a COVID-19 vaccine to enter indoor public spaces. The Los Angeles County Board of Supervisors will consider a similar requirement at its Aug. 31 meeting.

Similar mandates have been passed throughout the state, including in San Francisco and Palm Springs.

During its Aug. 16 meeting, the West Hollywood City Council directed the city attorney to draft an emergency order that would require proof of vaccination status before entering restaurants, bars, salons, gyms and other businesses.

Additionally, employees of the affected businesses and the city would also need to show proof of vaccination. Accommodations would be made for those with a documented medical exemption.

Councilwoman Sepi Shyne, who put forth the motion, said adequate time would be given for employees to receive a vaccine.

“We want to create a culture that is moving toward everyone being vaccinated,” Horvath said. “We want to come from a place of compassion and understanding for those who don’t yet have it, but if we can incentivize it by making places people want to go require the vaccine, I think that would help.”

Already, the tactic seems to be working. At a COVID-19 vaccination drive held by Melrose Action Neighborhood Watch and the Mid City West Community Council on Aug. 24, approximately 300 residents received a dose of the vaccine.

“We’ve been very considerate throughout this whole thing by staying at home and always wearing our masks,” Beverly Hills resident Corinne Davies who was receiving the vaccine said. “We were waiting until we felt more comfortable, and, if I’m honest, a big reason we’re getting it is because it’s mandated in a lot of places, and also, we want to do our part.”

West Hollywood City Attorney Lauren Langer will draft the ordinance to bring before the council at its next meeting on Sept. 20, though the city manager can issue an emergency executive order enacting the policy prior to the meeting.

City officials also discussed the possibility of adopting any potential policy Los Angeles County enacts. Councilman John D’Amico said even if the county’s policy only applies to unincorporated portions of the county, the city could still opt into it for synchronicity.

Similarly, the city of Beverly Hills is looking toward the county for guidance. In a letter to the Los Angeles County Board of Supervisors, Beverly Hills Mayor Robert Wunderlich said a regional mandate should be enacted.

“Small cities can be limited in their ability to create a significant impact beyond their borders,” he said. “In addition, variations in policy among cities can create confusion, so a regional solution is needed.”

The County Board of Supervisors will meet Aug. 31 to discuss options, and the Beverly Hills City Council has indicated that it will consider the county’s policies during its next meeting on Sept. 14.