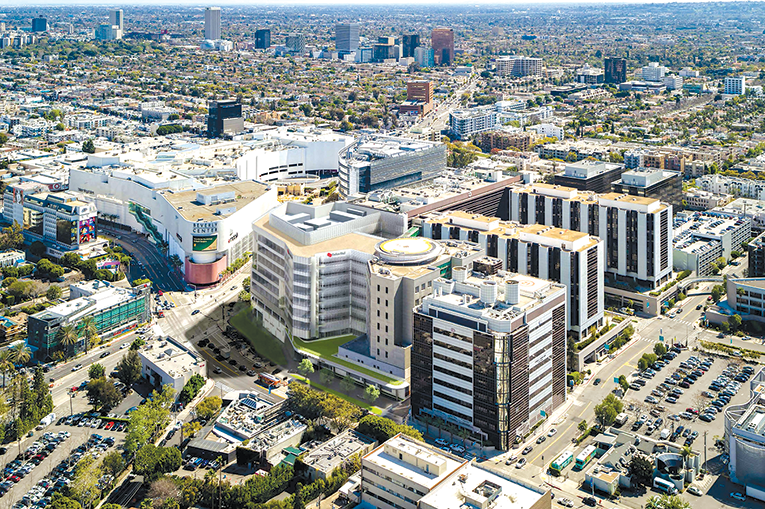 The proposal for a nine-story, 405,000-square-foot hospital wing expansion — with an additional 203 patient beds — at Cedars-Sinai Medical Center’s campus is headed to the Los Angeles City Planning Commission for consideration after a public hearing on Aug. 10.

Hospital officials said the proposal was spurred by the Alfred E. Alquist Facilities Seismic Act, which requires hospitals to remain fully operational even in the event of a major earthquake by 2030.

Jeff Smith, the medical center’s executive vice president of hospital operations and chief operating officer, said officials evaluated options for complying with the act and determined that building a new wing was the least intrusive way.

“It would take nearly 100 major phases of construction and span nearly two decades [if Cedars retrofitted its main buildings without constructing a new tower],” he added. “We would lose 120 beds during construction, and many hospital programs and departments would have to be relocated.”

Smith said a new wing would enable the center to shift programs and services while construction is ongoing in the main buildings — the North and South Patient Towers and the Professional Tower.

He said construction would be reduced to seven major phases and would take considerably less time. Additionally, the new wing would be energy-efficient and seek a LEED gold status, Smith said.

“This is difficult,” he added. “A hospital is a machine and a 24/7 facility that can’t just be turned off.”

The new hospital wing would be located at the southwest corner of Beverly and San Vicente boulevards. It would connect to the Professional Tower and the Saperstein Critical Care Tower, according to project documents.

Hospital officials said they will also improve the pedestrian experience on Beverly Boulevard as part of the project. The plaza level will feature healing gardens and offer shade and respite for visitors and patients.

Currently, a 16,200-square-foot medical building and a surface area parking lot occupy the potential site. They would be demolished if the proposal is approved, according to project documents.

Smith said Cedars-Sinai already has a surplus of parking and will continue to do so if the project is approved.

Jeff Haber, a partner in the real estate practice of Paul Hastings LLP, said the project would be exempt from the California Environmental Quality Act because it involves seismic upgrades.

It does not appear that the project will be a bitter pill to swallow. No one spoke critically of the project during Tuesday’s public hearing.

Debbie Dyner Harris, the district director for Los Angeles City Councilman Paul Koretz, 5th District, praised the way in which Cedars-Sinai was complying with the state law while maintaining service.

“It makes an incredible amount of sense,” she said.

“Cedars-Sinai has been an invaluable partner with Jewish Family Service in many ways for many, many years,” he added.

Additionally, several volunteers and former patients spoke. Corentin Villemeur was involved in a hit-and-run that resulted in him spending two months at Cedars-Sinai.

The project received unanimous support from the Mid City West Community Council’s Planning and Land Use Committee last week. Chair Daniel Schoorl said the general board will likely consider the project in September.

He said the project has several “positive” components – the seismic upgrades, the addition of beds, the improvements on Beverly Boulevard and the lack of parking impacts.

“At the end of the day, with the closing of Olympia hospital … it seems like this is not only a good project, but a needed project,” Schoorl said.

Smith, the chief operating officer, said Cedar-Sinai’s “whole quantifiable community benefit” was more than $723 million during the fiscal year 2021. He said $25 million was used for commitments toward the center’s COVID-19 rapid response efforts.

“For many years, Cedars-Sinai has served as a critical health care resource for the greater Los Angeles area,” Smith added. “The dedication to excellent care and community is always important, but even more so during unprecedented crises like the one we have been facing with COVID-19. Cedars-Sinai fulfills its mission to the community by investing in programs and services to improve the health status of the community.”

Back to school for Beverly Hills Unified