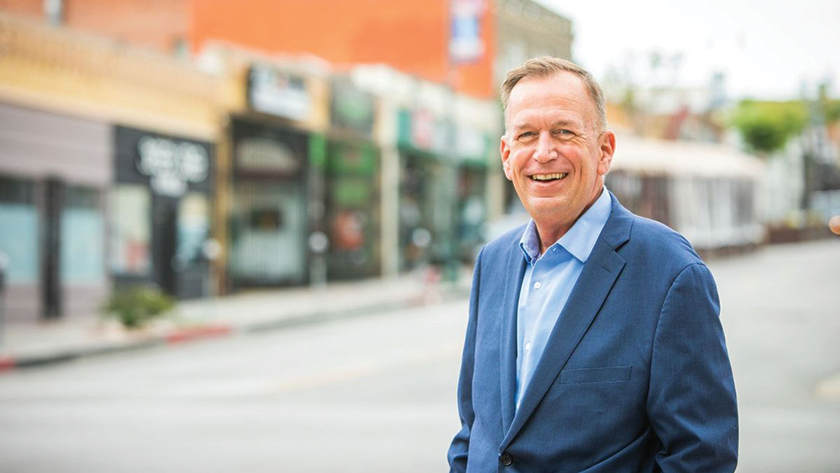 Rob Wilcox, a lifelong Angeleno who has served in city government for the past 20 years, said he knows first-hand the problems facing the city.

As deputy city controller and chief deputy inspector general under former Los Angeles Controller Laura Chick, and as the current director of community engagement and outreach for Los Angeles City Attorney Mike Feuer, Wilcox has seen how government functions and what it takes to get things accomplished, he added.

That is why he is running for Los Angeles city controller in 2022, to effectuate change and help solve intractable problems such as homelessness, crime and corruption. The city controller is the chief accounting officer and chief auditor for the city, and as such oversees how taxpayer money is spent and distributed.

“I am ready to run for citywide office because I believe we need a change. I believe this will be an election of change versus status quo,” Wilcox said. “The city that I love, the city of Los Angeles, is in crisis, and I believe the city controller’s office is one of the most consequential offices in city government.”

Wilcox is running to succeed current Los Angeles Controller Ron Galperin, who will be termed out in 2022. Also running is Los Angeles City Councilman Paul Koretz, 5th District, who is also termed out next year in his current position. Wilcox said one of the things that sets him apart is that he is not a career politician and is not part of the status quo.

“I am not an incumbent elected official. I am not going to have the most money and the establishment behind me. This is going to be a grassroots campaign, and I am asking the people of Los Angeles to join me,” he said. “The upcoming Los Angeles city elections are probably the most important ever held in our city. We are in a moment of crisis. I knew that it was time for me to step up as a candidate, especially as controller in an office where I know the power and capabilities. I have the experience to do the job and affect real transformative change.”

Wilcox said he has been speaking to people throughout the city and wants to hear about issues they believe need to be addressed. He cited addressing homelessness as his top priority, and vowed to examine how the city spends money to fix the problem.

“Let’s look at issue No. 1, homelessness. We know what we are doing now is not working. The city doesn’t have a plan. We have no comprehensive plan to deal with the homelessness crisis,” Wilcox said. “I want to perform the very first performance audit overall on the homelessness issue and look at every dollar that touches homelessness, whether it’s in Public Works, the L.A. Homeless Services Authority, the Housing Department or the many nonprofits that receive taxpayer dollars that serve those experiencing homelessness. Remember, the controller can look at any public dollar, it doesn’t have to be in a city department. If it goes out to a nonprofit or a third party contractor, the controller can look at those dollars.”

Wilcox also cited public safety as a primary concern, including rising crime. He said people he has spoken to throughout the city have told him they are concerned about the threat crime poses in the neighborhoods, particularly gun violence. He vowed to examine how the city spends money in addressing public safety.

“There is a real concern about crime in the neighborhoods and a rise in crime, so that is an important issue and we have to look at policing in Los Angeles and look at reforming, reinventing and reimagining the L.A. Police Department,” Wilcox said. “There are certain things our sworn officers should not be doing. They shouldn’t be the first ones responding to homeless individuals, to those suffering from mental health issues. We really have to look at the police department as a whole and how we can improve policing and issues of crime. Gun violence is up over 70% during the first several months of this year and we’ve got to be asking the questions why, and what can we do to stem that increase and that crisis. A real priority for me is keeping our neighborhoods safe and secure and that our residents feel respected and served by our police department.”

Wilcox also stressed the controller’s ability to fight corruption and said he plans to be a stern watchdog over City Hall.

“The people of Los Angeles expect more from their elected officials and their government. As controller, I will look at things like how hundreds of millions of dollars in contracts are handed out. What are the rules and procedures?” Wilcox added. “Let’s look at the development process. As we have seen with the scandals in City Hall with council members, that’s all revolved around the development process. The controller can go in and take a deep dive into those issues, uncover the problems and find solutions to put forward in a road map for change.”

During his tenure as director of community engagement and outreach in the city attorney’s office, Wilcox has helped Feuer organize and facilitate public meetings to keep the city focused on issues concerning residents.

Wilcox encouraged people to reach out to his campaign office if they want to share concerns and said he will continue to meet with constituents. Wilcox added that above all else, it is his experience that sets him apart.

“Serving as deputy to Laura Chick for over seven years was the ultimate experience in looking at how she transformed the office of city controller. When she was named by the governor to be the inspector general to oversee the Obama-era Recovery Act dollars, she took me to Sacramento to be her chief deputy inspector general,” Wilcox said. “This is incredible experience that I want to use for the people of Los Angeles in the coming years. This is change versus the status quo, and I am the change candidate.”