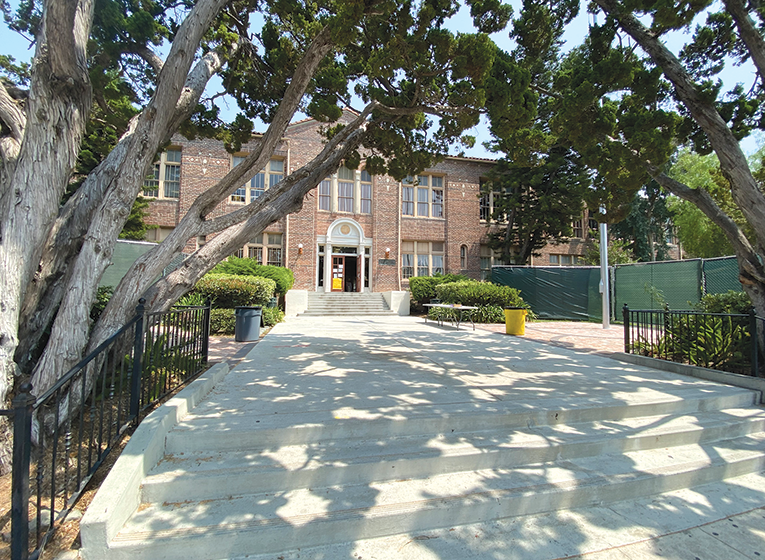 Fencing has been installed at John Burroughs Middle School, where many interior spaces on the campus are being renovated. (photo by Edwin Folven)

A temporary fence has been installed around John Burroughs Middle School at 600 S. McCadden Place to provide more enclosed open space for outdoor student activities during the pandemic.

It is one of many changes currently occurring on the campus, which opened in 1924 near the corner of McCadden Place and Wilshire Boulevard. John Burroughs Middle School serves 1,471 students in the 6th through 8th grades. The school remains open during the project.

The project has been in the planning stages over the last decade, and the pre-construction work started in July. Temporary trailers housing offices have been built, and new electrical equipment is being installed on the southeastern portion of the campus. A new driveway on McCadden Place and two other new driveways on Wilshire Boulevard will be created to improve access to the school. Preparations are also underway for utility relocation for new buildings.

Los Angeles Unified School District officials and school administrators worked with neighbors in the surrounding community as plans for the modernization project progressed. Cindy Chvatal-Keane, president of the Hancock Park Homeowners Association, said the upgrades will benefit the school and surrounding community.

“The HOA is supportive of the school updating and modernizing the classrooms and facilities for the students,” Chvatal-Keane said. “We worked with the school to preserve the historic buildings and design.”

Martinez said more coordination will occur with neighborhood representatives to mitigate any issues that arise as the project moves forward over the next six years. Neighbors will be notified in advance of particularly noisy work, construction vehicles will be prohibited from parking on public streets and crews will water frequently to limit dust.

“We will hold [virtual] meetings every two weeks, and they will all involve the community,” he added.

School administrators are also taking steps to ensure that disruptions are limited on campus during construction. For example, they are using temporary classrooms and trailers when work is occurring on the main buildings.

The construction project is unfolding as John Burroughs prepares to celebrate its centennial anniversary in 2024. The project will modernize the campus and further bring it into the 21st century, LAUSD Board of Education member George McKenna said.

“For almost 100 years, John Burroughs Middle School has delivered high quality instruction to LAUSD students and continues to be a hub of excellence in the Hancock Park community,” McKenna added. “The investments made to the campus through this modernization project will ensure that students have access to world class school facilities for the next 100 years and beyond.”