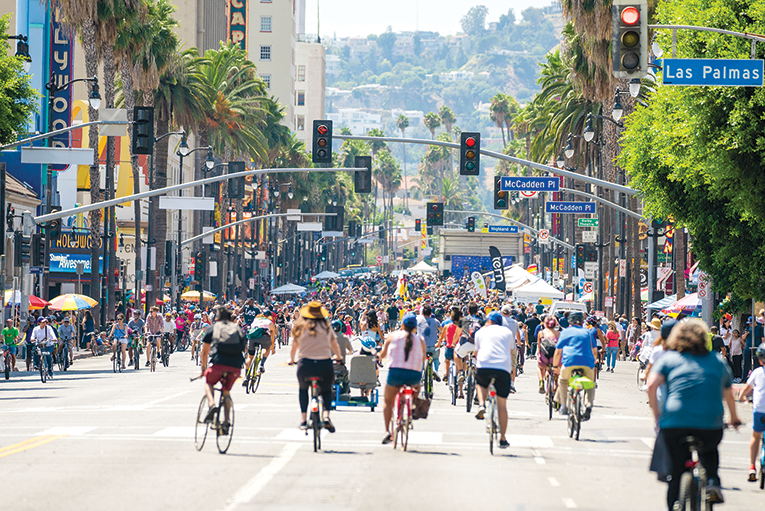 CicLAvia will again visit Hollywood and West Hollywood next year, and it may also include Beverly Hills. (photo courtesy of CicLAvia)

The city of Beverly Hills could be participating in its first-ever CicLAvia next year, after the City Council directed staff to pursue a partnership with the cities of Los Angeles and West Hollywood to host one of the open-street events.

If all goes well, the cities will file a joint grant application for funding from the Los Angeles County Metropolitan Transportation Authority. Metro’s Open Streets Grant Program awards up to $500,000.

Vice Mayor Lili Bosse said the city explored participating in CicLAvia a few years ago, but the cost was prohibitive and the event could have impacted the ongoing subway work.

“It was a lot more of a request,” she said. “I know it’s an incredible event. It brings people to our city.”

City staff reached out to representatives of CicLAvia about the possibility of the event running through Beverly Hills. According to a staff report, it is seen as a “high-priority event” in the city’s Complete Streets Action Plan.

City transportation planner Jessie Holzer said event organizers could not organize a new event in Beverly Hills due to previous commitments, but they could extend a planned event in Los Angeles and West Hollywood to include Beverly Hills.

She said CicLAvia will revisit its route from August 2019, when it traveled down Hollywood Boulevard to Highland Avenue, south to Santa Monica Boulevard and west to San Vicente Boulevard. If Beverly Hills participates, the route will extend down Santa Monica to Beverly Drive, Holzer said.

“Their goal is to have the event in the spring,” Holzer added.

As proposed, Beverly Drive would remain open to traffic, and a vehicle crossing point would be added at Doheny Drive and Santa Monica Boulevard, she said. Smaller intersections along the route would be closed to vehicles. 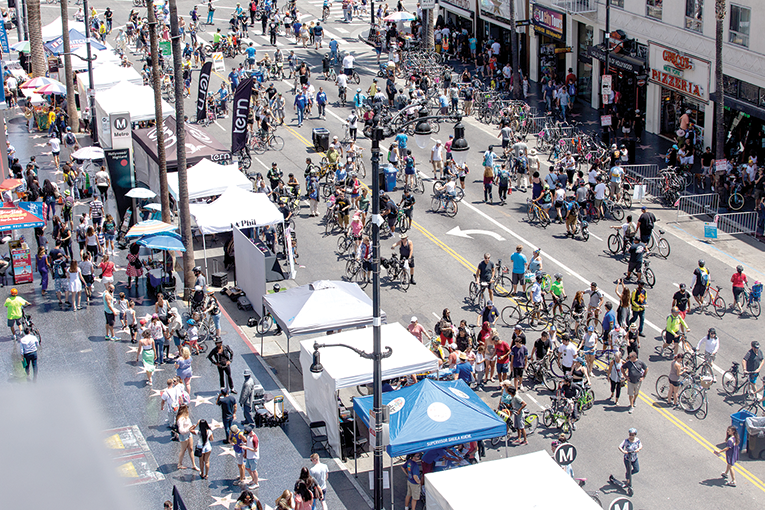 Beverly Hills officials are hopeful that CicLAvia is a net positive for the city, which has never participated in the event. (photo courtesy of CicLAvia)

The city would be responsible for helping with programming at various “hubs” along the route, Holzer said. She said it would present an opportunity to promote the city and showcase its music, art, culture and upcoming projects.

She added that the Metro grant program prioritizes multi-jurisdictional routes and routes that connect to rail stations. CicLAvia’s fee is approximately $300,000, Holzer said.

“This is really wonderful,” Councilman Lester Friedman said. “This is a really good opportunity for us to be a partner with Los Angeles and West Hollywood.”

However, he voiced a handful of minor concerns, such as what municipality would be responsible for a shared intersection at the edge of Beverly Hills. Holzer said the city would, as event organizers weren’t originally planning to use the area.

“Having said all that, I still think this is an opportunity for us to show, as a community, how getting on a bicycle and using other modes of transportation are encouraged,” Friedman said. “It sounds like a really, really fun event.”

Bosse and Mayor Bob Wunderlich have participated in CicLAvia events in the past. While they are “wonderful,” Bosse said she wants to ensure that residential areas of the city are not overwhelmed by an influx of parked vehicles.

Councilman John Mirisch said he supports the city’s participation; however, he noted that the funding involved could be used to host a lot of bicycle programs in Beverly Hills. Mirisch said he would like to see the city host more bicycle-friendly events, such as the bike lane demonstration on Roxbury Drive on July 25.

Councilman Julian Gold recused himself from the conversation because he has property interests within 500 feet of the route.