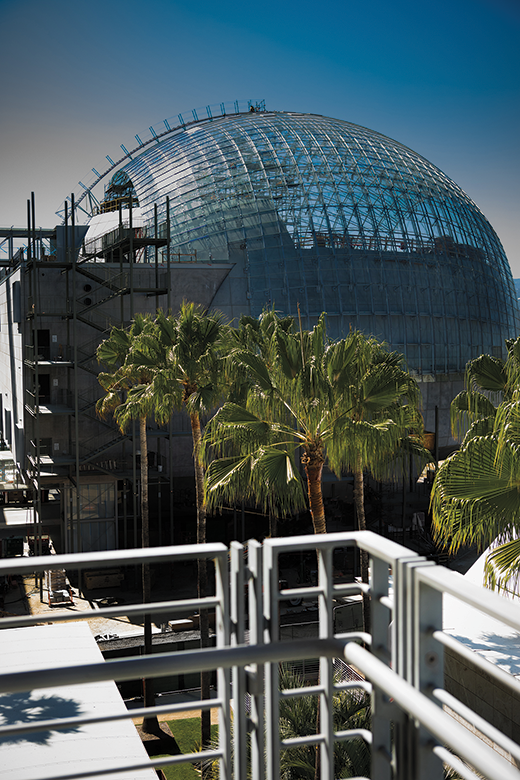 The Academy Museum of Motion Pictures is preparing for its opening on Sept. 30. (photo by Andy Kitchen)

The Academy Museum of Motion Pictures announced plans on Aug. 3 for the publication of three debut catalogues on the work of moviemakers Hayao Miyazaki, Spike Lee and Pedro Almodóvar, whose careers will be celebrated when the museum opens its inaugural exhibitions on Sept. 30.

“These first Academy Museum publications are a lasting record of our extraordinary inaugural exhibitions and our dynamic collaborations with Hayao Miyazaki and Studio Ghibli and filmmakers Spike Lee and Pedro Almodóvar,” said Bill Kramer, director and president of the Academy Museum. “Like the exhibitions, these catalogues will bring readers closer to the filmography, art, influences and careers of these remarkable artists.”

The illustrated catalogue on Miyazaki is published in partnership with Studio Ghibli. It will be available through the Academy Museum Store on Sept. 7. Marking the museum’s eponymous inaugural temporary exhibition, the publication features hundreds of original production materials, including artworks never seen outside of Studio Ghibli’s archives in Japan.

“Spike Lee: Director’s Inspiration,” available in April 2022, brings Lee’s Academy Museum gallery to life. It delves deeply into items from Lee’s personal collection, which will be on view at the Academy Museum, and offers insight into the Academy Award -winning writer and director’s heroes, influences and collaborations.

Audiences must ‘take their shot’ to see ‘Hamilton’