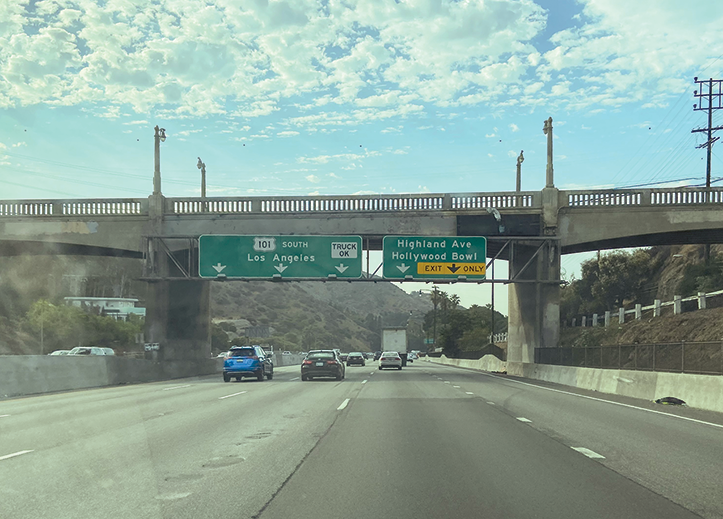 The female victim was struck by a vehicle on July 5 on the Hollywood (101) Freeway north of Highland Avenue. (Beverly Press/Park Labrea News file photo)

A 22-year-old man was arrested on suspicion of driving under the influence of alcohol on July 5 after his vehicle allegedly struck a woman whose car was disabled on the Hollywood (101) Freeway in the Cahuenga Pass.

California Highway Patrol spokesman Ramondo Alexander said the victim had been involved in a separate three-vehicle collision on the southbound 101 Freeway at approximately 4:40 a.m. and her car became disabled in a traffic lane near Pilgrimage Bridge, which spans the freeway just north of the Highland Avenue off-ramp. Alexander said the victim exited her vehicle and walked to the shoulder before attempting to return to her car to retrieve personal items. As she crossed a traffic lane, the unidentified woman was struck by a 2003 Chevrolet Trailblazer at approximately 4:45 a.m. and was killed, he said.

The Chevrolet’s driver pulled over and remained at the scene. Officers observed signs of alcohol impairment and took him into custody, Alexander said. The suspect was identified as Adrian Castroramos, of Los Angeles.

The Los Angeles County Department of Medical Examiner-Coroner declined to release the victim’s name. Alexander said she was 45 years old but added that law enforcement authorities are not releasing her identity because of the pending investigation. He had no further details about the initial collision and no other injuries were reported.

Alexander said the incident illustrates the danger of driving while impaired, as well as the importance of taking measures to remain safe if a collision occurs, particularly on a freeway. Never attempt to cross traffic lanes, he added.