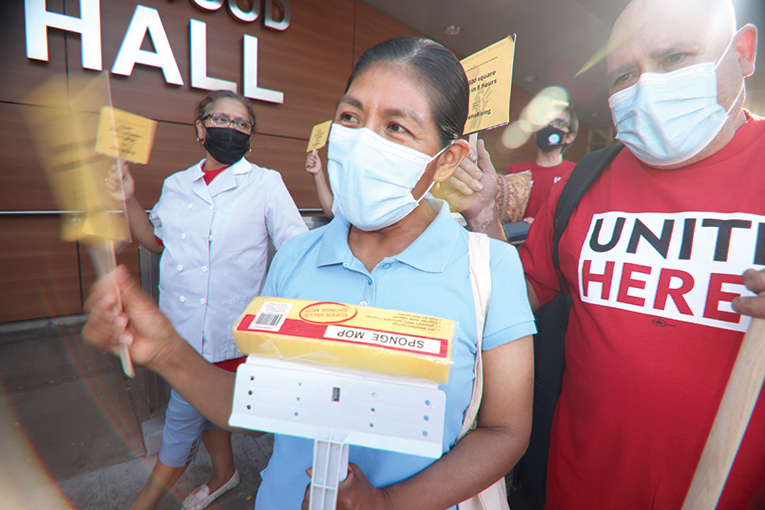 Hotel employees in West Hollywood will likely have new protections at their workplaces in the near future after the City Council voted 4-1 on Monday to approve a proposed hospitality workers ordinance.

Championed by Mayor Lindsey Horvath, Councilwoman Sepi Shyne and UNITE HERE Local 11, the ordinance further establishes the city’s commitment to social justice and respect and support for all people, one of the city’s core values, Horvath said.

“I am thrilled to see our city prioritizing a working relationship with our workers and protections for our frontline hospitality workers,” she said.

However, opponents say the ordinance was put together hastily with little outreach at a time when hotels are already suffering.

West Hollywood Chamber of Commerce President and CEO Genevieve Morrill said the chamber is “highly disappointed” with the outcome and that the vote was “disgraceful.” She said the ordinance approval was politically-motivated.

“It’s really unfortunate because it’s on the backs of our businesses and our workers,” Morrill said, adding that the hotels will figure out how to operate under the new ordinance. “But, it won’t help the workers.”

During Monday’s meeting, city staff requested that the City Council give them direction on several elements of the ordinance.

For the “right to recall” and worker retention portion, council members approved a provision that requires employers to offer laid-off employees any position for which that employee is qualified. The employee has 10 days to accept, and if the employee is not recalled, the employer must specify why within 30 days.

Additionally, any successor employer will be required to maintain a list of laid-off workers from the previous establishment and hire each eligible worker for no less than 90 days during the retention period. This could apply to any new hotel that occupies the former home of The Standard, for example.

As far as training, the council voted to require hotels to contract with a certified housekeeping training organization annually.

Mayor Pro Tempore Lauren Meister voted against the ordinance. She expressed several concerns, especially with the compensation and workload language. Meister called for the city to instead adopt a credit system, an equitable workload system that factors in details such as room size.

In general, she questioned some of the UNITE HERE Local 11 workers’ claims. Meister said some of the grievances aired – such as employers not paying overtime or allowing breaks – were illegal and regulated by a government agency, but the complaints were not being filed with the “labor board.”

“I have to say that I’m sad about all of this because I think it’s been very divisive,” she added. “I think making our hotels out to be evil is very sad, especially since they have always done what the city has asked. They have always accommodated us. They’ve always tried to work with the city, and they’ve provided a lot.”

More than 90 people signed up to speak at the meeting. A significant number of them were hotel workers and representatives of UNITE HERE Local 11, who spoke in favor of the proposed ordinance and outlined the difficulties of their jobs – or former jobs.

Santa Monica City Councilwoman Gleam Davis also spoke in favor of the ordinance, which was modeled after one passed in Santa Monica a few years ago.

“I just wanted to let you know that the projections of hotel apocalypse were completely unfounded. …Our hotels are thriving,” she said. “We’re on the rise and the ordinance in no way affected our ability to deal with the COVID emergency. …[The provisions] will be good for workers. They will be good for your economy, and it’s the right thing to do.”

Some speakers called for the city to do an economic study prior to approving the ordinance. Morrill, of the West Hollywood chamber, was among them. She said the city doesn’t know how the ordinance will impact its hotels.

“We are not Santa Monica. We are not Long Beach,” Morrill said, adding that the ordinance was a “tourism cap.”

Other speakers raised concerns about city services and whether they will continue to be funded if the ordinance impacts the city’s transient occupancy tax revenues. City staff assured residents that services are funded via the recently-approved budget.