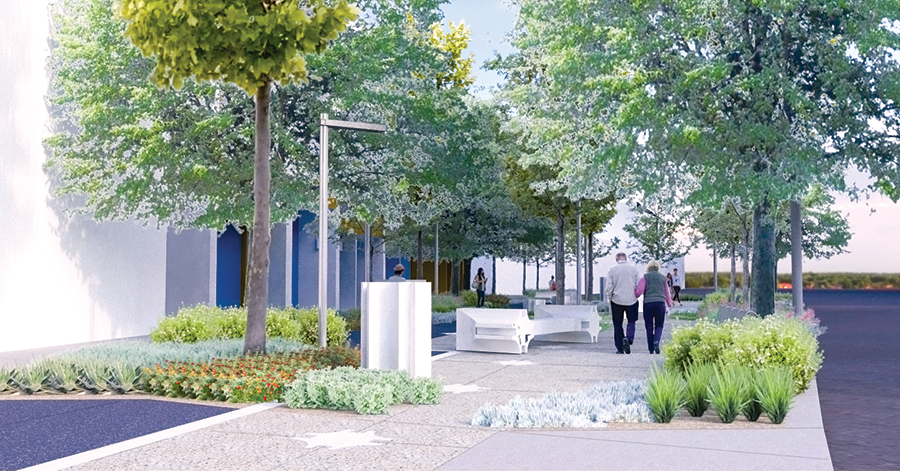 Pieces of the demolished buildings designed by William Pereira at the Los Angeles County Museum of Art will likely become art installations in West Hollywood, after the City Council approved a $135,300 agreement with artist Cayetano Ferrer last week.

Ferrer’s “Extraction” will be an integrated art component for the Melrose Norwich Gathering Place, a 1,000-square foot pocket park at Melrose Avenue and Norwich Drive, after the council’s 4-1 vote.

Mayor Pro Tempore Lauren Meister voted against the agreement and echoed concerns expressed by the West Hollywood West Residents Association. She said the association and community had “made it pretty clear” they were unhappy with the art.

The president of the association, Leslie Karliss, was the lone public speaker. She said the city needs to determine whether the space is supposed to be an art installation or a gathering space.

“If it is a gathering space, then this installation is just not appropriate,” Karliss said. “It is a cold and uninviting ruin from a museum with a design regarded as so unremarkable that it was torn down.”

She said the area should be a green space with a rotating art element for residents in the adjoining neighborhoods and the shoppers on Melrose Avenue who could use a “departure from the traffic-laden urban environment.”

Karliss said the current art element is “apocalyptic,” although she understands that art is supposed to elicit reactions from viewers.

“But, do we really want to provoke despair in a gathering space?”

Rachel Dimond, a senior planner in the city’s Long Range Planning Division, said the space was designed for all user types. She said city staff had collected input at previous community meetings and tried to address as many concerns as possible.

“We also heard a lot of positive commentary on the art,” Dimond added.

Public art coordinator Rebecca Ehemann said one of the community concerns was that there was too much concrete at the space, and that individuals wanted it “greened up.”

“And the design team responded,” she said.

Meister asked if it was possible for the art component to be temporary. Ehemann said staff opted to pursue a permanent acquisition as a temporary installation would require more maintenance.

Additionally, on July 22, the West Hollywood Arts and Cultural Affairs Commission voted 5-1 to approve the design of the Beverly Triangle Plaza, a 5,000-square-foot gathering space proposed at Beverly and Robertson boulevards.

Representatives of West Hollywood West have also expressed concerns about this proposal, as they believe the design, which is partially enclosed as of now, could foster public safety issues and attract homeless individuals.

The community will have several more opportunities to weigh in on the project prior to it being considered by the City Council. One such community meeting is scheduled for 5 p.m. on Aug. 9, via Zoom.