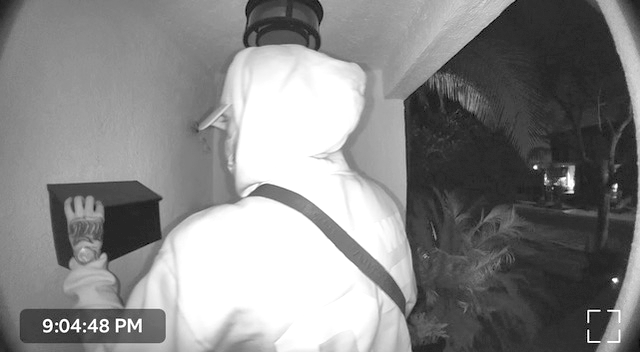 A security camera image of a mail theft suspect in West Hollywood was distributed to the public, and authorities are searching for him. (photo courtesy of the West Hollywood Sheriff’s Station)

Authorities at the West Hollywood Sheriff’s Station are warning residents about a recent series of mail thefts occurring in the city and are offering tips to prevent becoming a victim.

Lt. Bill Moulder said the detectives are investigating multiple thefts last week at apartment buildings on Westbourne Drive between Santa Monica Boulevard and Melrose Avenue in which a perpetrator may have had a key to access locked mailboxes. At least one other mailbox break-in was reported in the 9000 block of Ashcroft Avenue, south of Melrose Avenue and east of Doheny Drive. The male suspect was captured on security camera footage attempting to get inside a mailbox.

“I know that there were a couple incidents where it appears to be the same person in different parts of the city,” Moulder said. “We have been putting out information on social media and are warning people to protect themselves from becoming victims.”

Moulder said mail and package thefts have been a long-standing problem, particularly during the holidays when a lot of gifts are mailed, but incidents increased significantly last year when people started to use the U.S. Postal Service and private delivery companies more frequently during the COVID-19 pandemic. Mail theft is a crime of opportunity and perpetrators usually strike at night or when people are away from residences, he added. Sheriff’s department officials are proactively trying to address the problem.

“At the West Hollywood Station, our COPPS (Community Oriented Policing and Problem Solving) Team and our Entertainment Policing Team have done operations that included both plain clothes officers and saturation patrols in areas where we have seen these happening,” Moulder said. “We have done things to address them but it can be challenging.”

The lieutenant said it appears the suspect in the most recent mail thefts had a master mailbox key, which are illegal for members of the public to possess. Many times, perpetrators steal the keys from postal employees or obtain them on the black market. Moulder declined to speculate on how the suspect in the recent thefts obtained a mailbox key, but added that investigators have made the U.S. Postal Service aware of the crimes. Detectives also reached out to other neighboring police agencies, but have not linked the thefts in West Hollywood to crimes in other cities.

Leslie Karliss, president of the West Hollywood West Residents Association, said the recent mail thefts have caused concern and the association emailed notices to members advising them to protect themselves.

“We are very concerned, which is why we sent out a notice,” Karliss said. “The sheriff’s say they are on it, but you don’t know. Keep your mailboxes locked and don’t leave packages outside.”

The city of West Hollywood also distributed information about mail theft prevention, with tips particularly for residents of apartment and condominium buildings.

Moulder said people should make sure doors to residential building lobbies are closed and locked. Do not let strangers inside. Remove mail and packages daily. Consider installing security cameras or asking building owners or condominium associations to install cameras. If a check or something valuable does not arrive as anticipated, contact the U.S. Postal Service immediately. For information, visit faq.usps.com/s/article/Mail-Theft.

“If it’s not secure, you may want to try a different method of delivery at your building so it’s safer,” Moulder added. “It’s good to have video, and make sure the place is locked up.”

Anyone who suspects they are a victim of mail theft or wants information is encouraged to call the West Hollywood Sheriff’s Station at (310)855-8850.