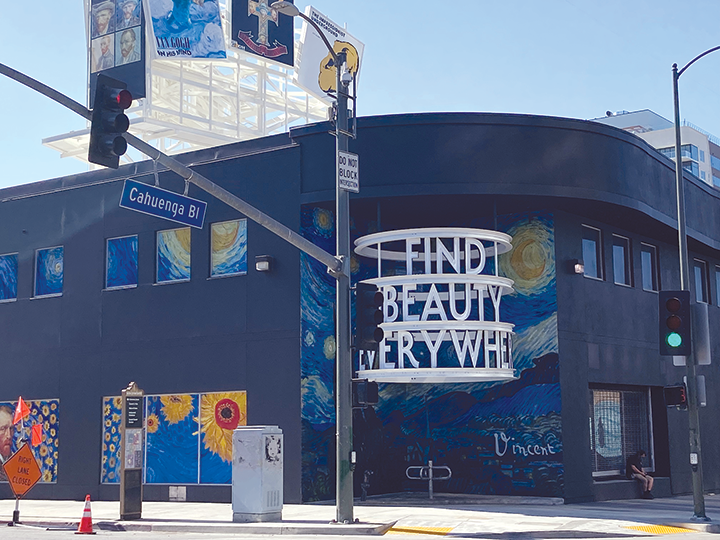 Following its run in Paris and Toronto, the digital Van Gogh experience has made its way to Southern California. The 500,000 cubic foot exhibit will be hosted at Lighthouse Immersive at 6400 Sunset Blvd., where thousands once visited Hollywood’s beloved Amoeba Music record store. From July 31 through Jan. 2, 2022, guests will have the opportunity to experience Van Gogh’s most famous works in a new immersive digital experience.

Designed and conceived by Massimiliano Siccardi, with a soundtrack by Luca Longobardi, the exhibit immerses guests in some of Van Gogh’s most celebrated art pieces such as “Mangeurs de pommes de terre (The Potato Eaters),” the “Nuit étoilée (Starry Night),” “Les Tournesols (Sunflowers),” and “La Chambre à coucher (The Bedroom).” 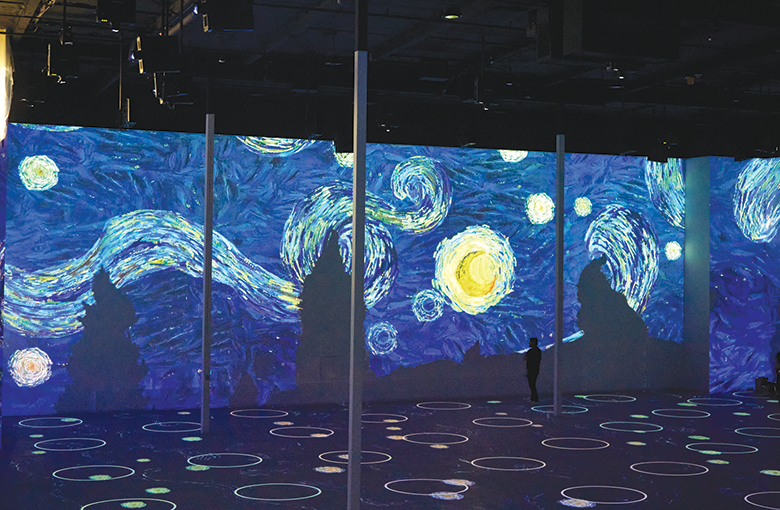 Guests can experience some of Van Gogh’s most famous works in a new immersive format. (photo by Greyson Tarantino)

Guests can expect to see Van Gogh’s imagination and creativity on display with innovative lighting, projection and moving images.

Mark Shedletsky, co-founder of Impact Museums, one of Immersive Van Gogh’s presenting partners, found Hollywood to be the ideal base after looking at a number of Los Angeles neighborhoods.

Shedletsky’s team was looking for very specific capabilities in a physical host, including the ability to house pieces that measure more than twice the size of most commercial retail ceilings. The unique set of measurements required a space that was not only sizable but still maintained an aesthetically pleasing look.

Impact Museums was also drawn to the history of Amoeba Music.

“We were hoping that instead of this place being torn down, that art in culture could live on in the space with a new type of experience,” Shedletsky said.

Shedletsky’s team has kept all of Amoeba’s iconic band stickers and much of its original decor to retain the presence and spirit of the shop while still transforming the space in hopes of bringing additional immersive experiences to the building.

“There’s a couple of great little surprises that are very Hollywood and are unique to this space. I don’t want to give too much away,” Shedletsky smiled.

The new Van Gogh experience will give viewers a unique new perspective of his art. (photo by Greyson Tarantino)

An artist himself, O’Farrell welcomes the arts to the streets of Hollywood.

“Hollywood is an anchor for the creative class in Los Angeles. It has the history, the tradition, and we’re maturing as a city when it comes to the art world. I welcome the community of Hollywood being the cradle of fine art and experimental works and expanded thinking,” O’Farrell said.

Shedletsky’s Impact Museums team remained focused on engaging the Hollywood community in the project. At the exhibit, guests can purchase food and beverages from Hollywood vendors and enjoy a Van Gogh-inspired mural by L.A. artist David Flores that wraps around the outside of the building.

Shedletsky hopes existing filmmakers and artists not only enjoy the creative experience, but also feel compelled to partner to bring similar pieces to life in the future.

According to O’Farrell, there is an even more prevalent demand for enrichment opportunities as lockdown restrictions are lifted.

“I think this immersive exhibit is going to really fit the bill. It’ll no doubt pique the interest of a whole new generation of folks who will appreciate art and history in a neighborhood that is already known for its creativity and inventiveness. It’s a perfect fit,” O’Farrell said.

For tickets and information, visit tickets.vangoghla.com.