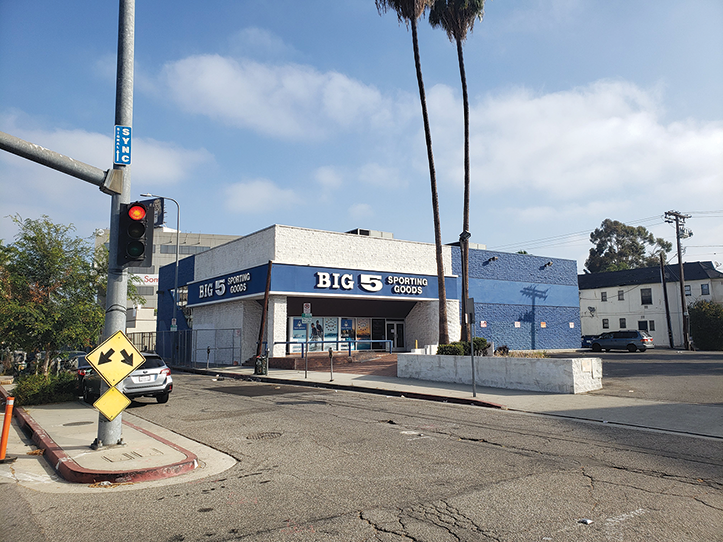 The Big 5 Sporting Goods store near Wilshire and San Vicente boulevards may be torn down to make way for medical office space. (photo by Cameron Kiszla)

The draft environmental impact report for a proposed 12-story medical building project at the northeast corner of Wilshire and San Vicente boulevards has been released, and although the project is in its infancy, officials have already identified some concerns with the proposal’s parking plan.

According to the Los Angeles Department of City Planning, the mixed-use project would demolish a vacant building that formerly housed a school, as well as the Big 5 Sporting Goods store and its surface parking lot. A large homeless encampment was located on San Vicente Boulevard near the store and the closed school.

Councilman Paul Koretz, 5th District, said he supports the use of medical offices at the site, but he has a number of concerns – most importantly, parking. According to city planning, the project would offer seven floors of medical uses over four floors of above-grade parking. It would offer full-valet services for 418 vehicle parking spaces and 716 bicycle parking spaces.

“It’s clearly unrealistic to believe that patients will ride bikes to a medical appointment in such great numbers,” Koretz said. “The Census Bureau reports 1% of workers commute by bike in Los Angeles, and I’m sure even fewer travel by bike to their medical appointments.”

He said the use is “ultimately beneficial,” but he shares resident concerns about “shade and shadow,” air quality, parking impacts and infrastructure impacts. The California Environmental Quality Act does not consider parking impacts, but it should, Koretz said.

“I … stand with my constituents and do believe that parking is an important resource, and while it’s not an environmental impact, we can certainly agree that this project in its current form will impact on-street parking,” he added. “Construction of a building this size or even a smaller building will also have significant unavoidable impacts.”

The councilman said he is still in the process of reviewing the draft EIR, but he “is looking closely” at a couple of alternatives – one involves reduced square footage, while the other suggests that the project be developed under existing zoning.

“Both alternatives, however, are still inadequate and should include more parking and better parking management,” Koretz said.

Although the project “still has a long ways” to go, he has received feedback about it. While Koretz said the project is “months away” from a planning commission meeting, he invited residents to direct comments about the project to his development team or to his senior planning deputy, Daniel Skolnick, at daniel.skolnick@lacity.org.

According to the developer, CBRE, the project would be located on three-quarters of an acre at 656 S. San Vicente Blvd. Designed by ZGF Architects, it would include built-in sustainability features, energy-efficient design and green spaces.

For information, visit planning.lacity.org. To comment on the draft EIR, call (213)847-3629 or email paul.caporaso@lacity.org.

Changes coming to cannabis in WeHo