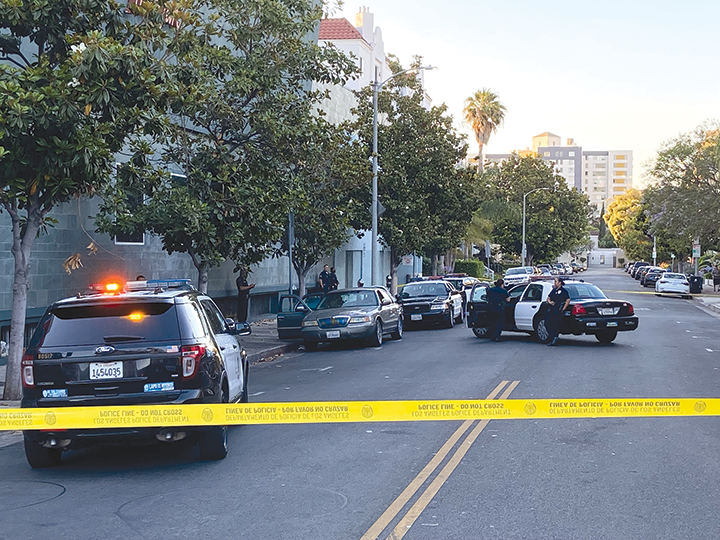 Ridgeley Drive was closed for hours north of Wilshire Boulevard on June 23 while police investigated a murder. (photo by Edwin Folven)

A 60-year-old woman has been charged with murder for allegedly shooting a man on June 23 near the corner of Wilshire Boulevard and Ridgeley Drive in the Miracle Mile.

The shooting occurred at approximately 12:40 p.m. on a sidewalk along Ridgely Drive. Both the suspect and unidentified victim – a man in his 40s – are believed to be homeless, said Capt. Shannon Paulson, with the Los Angeles Police Department’s Wilshire Division. Officers located the suspect later that day in the neighborhood, she said. The suspect and victim did not know each other, Paulson added.

“The shooting happened on a sidewalk adjacent to a Ralph’s (grocery store),” Paulson said. “The suspect had fled prior to officers arriving on scene. They later located her in the immediate vicinity of the homicide scene.”

Multiple witnesses called 911 after the shooting, Paulson added. Authorities found the victim, who police said was in his 40s, suffering from gunshot wounds and transported him to a hospital, where he later died.

Paulson said based on witness accounts, the suspect argued with the victim before the shooting. The suspect fled in a car, which officers found shortly after 7 p.m. on June 23, she said.

The suspect, Eva Fekete, surrendered without further incident, and officers recovered a gun in the car, Paulson added. The captain did not know who owned the vehicle and gun, which is part of the investigation. Fekete is believed to be the only suspect involved, she said.

“We know she had access to a vehicle and had a gun. We know they had a verbal altercation there,” Paulson added. “West Bureau Homicide is handling the investigation and still putting the pieces together.”

Fekete pleaded not guilty to a murder charge on June 25, according to Los Angeles County District Attorney’s Office spokesman Greg Risling. She remains in custody in lieu of $3 million bail at the Los Angeles County Sheriff’s Department’s Century Regional Detention Facility. Fekete is next expected to appear in court for a preliminary hearing on July 9.