See TV and movie magic up close in studio tour 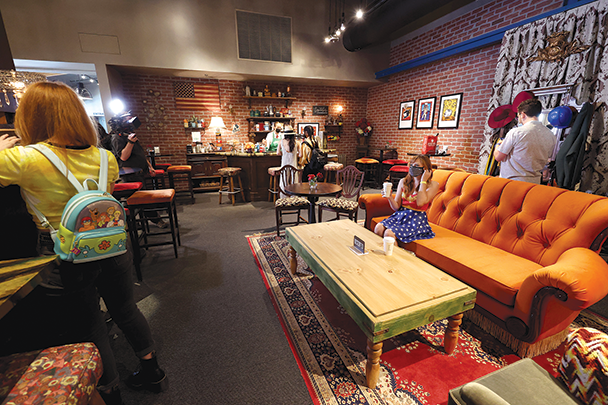 Warner Bros. Studio Tour Hollywood has welcomed back guests with new experiences that get fans closer to the entertainment.

Upon arrival, guests will be greeted at the new welcome center – a gateway to Hollywood – with new ways to go behind the lens of movie-making magic. The studio tour includes the “Storytelling Showcase” and a new interactive grand finale titled “Action and Magic Made Here.” Also, a new studio store offers exclusive merchandise from films and TV shows.

“Entertainment is about connecting with fans and we are thrilled to welcome guests back to the tour after a more than 15-month hiatus” Vice President and General Manager Danny Kahn said. “Our new experiences will take guests on a journey through our history, how we bring stories to life, and celebrate the DC Universe and Wizarding World.”

Guests first enter the “Storytelling Showcase” where they examine the breadth of the studio’s film, TV and animation titles, as well as the technological innovations from its cinema chain origins in 1923 to becoming one of the biggest entertainment companies in the world. Guests can take a selfie with a replica of the iconic Warner Bros. Studios water tower along a walk featuring an aerial view of the sprawling studio lot.

After the guided tour of the lot, guests will arrive at “Stage 48: Script to Screen,” the studio tour’s interactive sound stage, where they can immerse themselves in the technology and methods of production, and enjoy the Central Perk set from “Friends” and Sheldon’s apartment set from “The Big Bang Theory” before dining at the studio’s Central Perk Café. Guests will then head to the “Action and Magic Made Here” grand finale, where they’ll experience the universe of DC super heroes and super villains, and step behind-the-scenes of “Harry Potter” and “Fantastic Beasts” with new interactive experiences, props, costumes and photo opportunities. DC fans will enter Batman’s secret lair and explore the new Batcave, where they can get up close to the authentic Batmobile from Tim Burton’s original “Batman,” the Tumbler from “The Dark Knight,” and the Batwing from “Batman v. Superman.” Other highlights include the Lasso of Hestia from “Wonder Woman 1984,” Joker and Harley Quinn costumes from “Suicide Squad,” Poison Ivy in front of the actual Arkham Asylum gates featured in Joel Schumacher’s “Batman and Robin” and ephemera from “Aquaman,” “Superman” and Zack Snyder’s “Justice League.”

The studio will be open only on weekends through July 11, with the exception of July 5. The tours will begin every 30 minutes from 9 a.m. to 3 p.m. After July 15, the Studio Tours will run every 30 minutes from 9 a.m. to 3 p.m., Thursday through Monday. Adult tickets are $69; $59 for children ages 5-10. Southern California residents can purchase tickets for $57 on weekdays only, through Sept. 30. Advanced reservations are required.