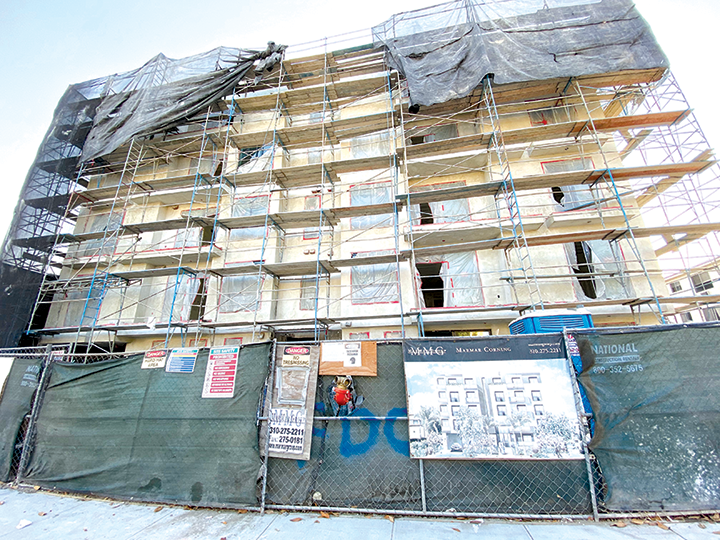 Another MarMar Group development on Corning Street has been under construction for more than two years, residents said. (photo by Edwin Folven)

Some residents along Corning Street in the South Robertson area think that the math at a proposed apartment development does not add up. Six stories plus 12 units equals seven parking spots?

The measure provides incentives, such as relaxed parking restrictions and increased density, for some housing developments that are close to major transit stops and provide affordable housing. The MarMar development offers two units that are very low income, according to Los Angeles city planning documents.

“In an area of the city with a large number of new residential construction projects, this is a common occurrence with the developers — build these large-scale projects, offer very limited parking options for tenants and hope they take alternate transportation, use bicycles or just park their cars on the streets,” Corning Street resident Jill Mazur said. “Most of the older buildings in the area have limited parking as well, so many current residents of older buildings use tandem parking or street parking, leaving our streets congested and no available street parking for these new developments, let alone any guests who may need to park in the area.”

She said Markowitz is “well known” in the area and is supported by the South Robertson Neighborhood Council’s Land Use Committee. MarMar Group is building a 19-unit building adjacent to the Corning Street project that is even bigger, Mazur said.

“That’s a very tight squeeze to put so many units into and [it] is taller than any other building on the block,” she said.

Resident Shirley Perl opposes the project as well. She said it would impact an already-overcrowded Corning Street, where it’s “impossible” for motorists to pass one another or find parking.

“There are so many things wrong with this proposed plan,” Perl said, adding that the property had previously housed a duplex.

She said the other MarMar Group project — the 19-unit building — has been under construction for more than two years, and that the developer has not been the most responsible neighbor.

“When there have been issues at his construction site, we have to call [or] text his site manager numerous times and still do not always get them addressed,” Perl added. “He has only displayed a disregard of the residents, renters [and] homeowners on our street and [the] neighborhood.”

According to Los Angeles City Councilman Paul Koretz’s Office, the Los Angeles City Council does not have oversight on transit-oriented community projects. Residents who oppose developers using the policy are advised to file a petition and gather enough signatures to put the issue on the ballot to amend or repeal the ordinance, representatives said.

Neither Markowitz nor the neighborhood council could be reached for comment by deadline.