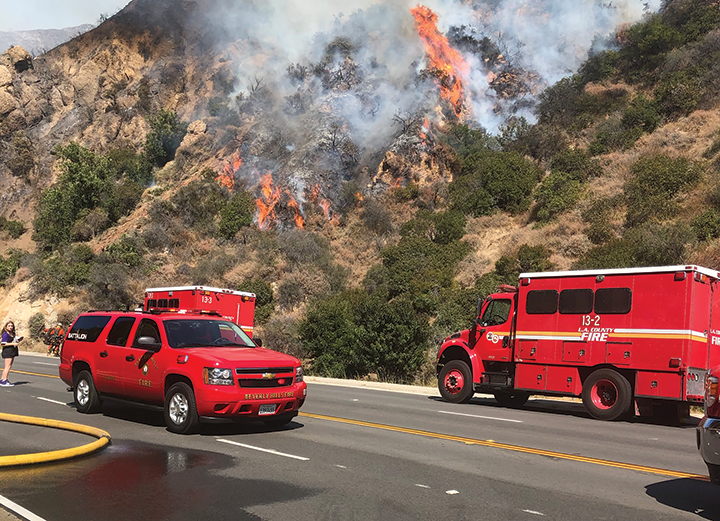 The Beverly Hills Fire Department aims to be proactive in addressing brush fires in the hills above the city. (photo courtesy of the BHFD)

The city of Beverly Hills and the Beverly Hills Fire Department released an independent Wildfire Assessment Report on July 9 that will guide the department in addressing the potential threats posed by brush fires in the hills above Sunset Boulevard.

BHFD Chief Greg Barton said the mountainous areas of Beverly Hills include 1,640 parcels with approximately 5,000 residents. Warm temperatures and drought conditions have heightened the potential for destructive brush fires, and Barton emphasized the importance of preparedness and planning ahead to minimize the risk.

“The question is not if it’s going to happen, but when it’s going to happen,” Barton said. “We wanted to take a holistic look at it. The city of Beverly Hills always wants to be proactive, not reactive, so we looked at how can the city come together and be more prepared for wildfires.”

Barton said a major component of the effort is to disseminate information and work collaboratively with residents. The city held two public meetings this week to discuss the report, with 8-10 residents attending the first meeting on July 12. Barton hopes more residents will get involved. The public is encouraged to read the report online or contact the BHFD with questions.

The fire chief said the city has assigned a full-time fire inspector to the neighborhoods north of Sunset Boulevard who works with residents on brush clearance and other preventative measures. Barton stressed that safety is a team effort involving the fire department and the public.

“It allows us to get boots on the ground and to talk to each individual homeowner,” Barton said. “We are doing everything we can ahead of time to reduce the impact of wildfires. It’s very important to empower residents on ways they can help the wildfire problem.”

The report was created by the consulting company Wildfire Defense Works. Since 2005, the city has participated in the Firewise/USA Recognition Program, which recognizes municipalities and fire departments that have proactively worked with residents to reduce wildfire risk. Residents participating in the Beverly Hills Firewise Program voluntarily clear brush around homes and make their properties more resistant to fire. Beverly Hills is one of approximately 1,800 communities nationwide that have received Firewise/USA recognition. The Los Angeles Fire Department and Los Angeles County Fire Department, which serves West Hollywood, are not part of the Firewise/USA program.

Barton said the city conducted a previous assessment in 2018 that also recommended safety measures. He said the 2021 report used updated computer software to analyze different scenarios under which wildfires may occur, which gives a better overall picture of preventative steps that are necessary.

The fire chief said one of the controversial components of the 2018 report was a recommendation to remove approximately 1,200 trees in the area north of Sunset Boulevard. The 2021 report revised that estimate to approximately 100 trees that should be removed in the short term, and recommended a further long term analysis on other trees to determine the need for removal.

The 100 trees recommended for removal are primarily along evacuation routes such as Loma Vista, Coldwater Canyon and Benedict Canyon drives, as well as Carla Ridge in the Trousdale Estates area and Hillcrest Road. Barton said they include pine trees that can be very flammable when they become dry due to drought or die from age. The focus is on ensuring streets in the hills can safely accommodate an evacuation. He also cited red flag restrictions that prohibit parking on streets on windy days when fire danger is high.

“Our big concern is we are able to get the firefighters in and the residents out, and that is what our focus is currently right now,” Barton added.

Ongoing drought conditions have also raised concerns and Barton said recent climate conditions have exacerbated wildfire risk, further solidifying the need for collaborating with residents and planning ahead. He said of the 20 largest brush fires recorded in California history, the top seven largest fires have occurred since 2007.

“The drought is affecting the situation. The vegetation is drying out faster and earlier that in previous years,” Barton said. “Within the last three years, fires have really changed and we are getting really large fires in the state.”

The city of Beverly Hills partners with the Los Angeles Fire Department and other agencies when brush fires erupt in the hills and agreements are in place in which neighboring departments automatically send resources when fire are reported, he said. Those resources include large helicopters that can quickly douse flames and prevent them from spreading before firefighters reach remote area in the hills.

Barton said the effort to address wildfire risk is ongoing and he encouraged residents to view the report online and to contact the fire department with questions by calling (310)281-2703, emailing firesafety@beverlyhills.org or visiting beverlyhills.org/firesafety.

“Wildfires are one of the most complex natural disasters and there is no one silver bullet to addressing them,” Barton said. “My goal is to get the message out that it’s a team effort. We need to work together to address the problem.”