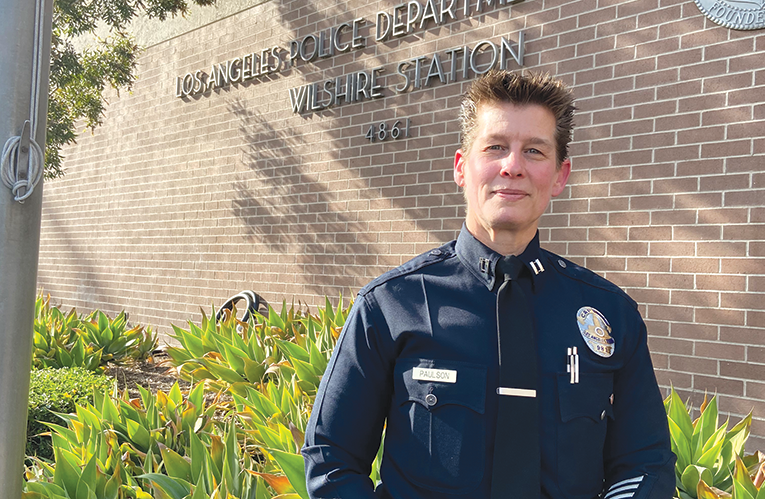 Capt. Shannon Paulson, who will soon leave the LAPD’s Wilshire Division for a new assignment, said progress was made in reducing crime during her tenure. (photo by Edwin Folven)

The Wilshire Division’s current commanding officer, Capt. Shannon Paulson, reflected on progress and challenges in addressing a spike in crime in the area as she prepares to leave for a new assignment as assistant commanding officer of the LAPD’s Counter-Terrorism and Special Operations Bureau. The station’s new leader, Capt. Sonia Monico, will soon take the reins at the police station.

The target date for the transition is Aug. 1, but Paulson said it remains fluid and could be earlier depending on LAPD administrative decisions. Paulson believes her tenure at the station has been productive and that crime rates have started decreasing. She credited the personnel at the Wilshire Division for achieving the successes and added that her work in the community will continue until her final day.

“I am sorry to be leaving Wilshire. I have had a good time here,” said Paulson, who will be promoted to the rank of commander in her new assignment. “There have been a lot of challenges over the last year with the pandemic. Obviously, we are seeing an unfortunate trend in crime, not just here, but nationwide and throughout our city. While it isn’t reflected in the Wilshire Division to the extent of what some other areas are experiencing, we are definitely seeing some of that.”

Paulson, who joined the LAPD in 1991 and was assigned to the Wilshire Division in early 2020, said her primary focus was reducing violent crime. She addressed recent homicides, which she said get a lot of attention and cause fear in communities. There have been eight murders reported in the division so far this year compared to two in 2020, she said. They include a murder in late March in which a man believed to have been a transient stabbed a 31-year-old Beverly Grove resident and then took his own life, as well as two fatal shootings in the Melrose area on Jan. 11 and Feb. 26.

“Keep in mind, 2020 was an anomaly [because of the pandemic]. For the most part, the [homicides] have been singular incidents, products of disputes or altercations among known parties,” Paulson said. “In every one, a suspect or suspects are in custody. With the last two (on June 16 at Park La Brea and on June 23 at Wilshire Boulevard and Ridgeley Drive), we have had suspects in custody within hours.”

Paulson said another serious issue is an increase in robberies, including a series of hold-ups in the Melrose area this spring in which suspects targeted people wearing luxury watches and jewelry.

“We started off the year with a severe increase in the robbery rate, and that is violent crime that really concerns us,” Paulson said. “We have been gradually chipping away at it. We are starting to see reductions.”

“That is the continued focus. We are working on it on a daily basis,” Paulson said. “We have had a lot of success. The detectives have done incredible work in putting investigations together. Officers have been active on patrols to suppress crime patterns.”

The captain said the reduction in robberies is partly linked to arrests made in March of two alleged robbery suspects in the Melrose area, as well as a high-profile police presence in areas where there are many shoppers and tourists like the Melrose and Fairfax districts, The Grove, Original Farmers Market and Beverly Center.

“We have broken up some patterns and clusters,” she said. “We believe small groups were responsible for some of this increase in crime, and we have made arrests and are addressing them.”

Paulson said the Wilshire Division is fortunate because there are a multitude of individuals and community organizations willing to partner with police. She said building relationships and fostering trust among residents and people who work in or visit the area is key. Moving forward, she hopes the department and the community will continue to embrace technology like Zoom, which allows more people to come together and share information.

“As we move out of the health crisis, community engagement will be more important than ever,” Paulson said. “One of my main suggestions would be to engage in a hybrid approach to our community meetings, such as the Community Police Advisory Board and others. We saw a lot more people participating in the virtual format.

Paulson said the department is already working to ensure a seamless transition when Capt. Monico assumes command. Residents can expect the same high-level of community engagement and crime suppression work by law enforcement personnel in the Wilshire Division, Paulson added.

“That will not change. The work we do and the service we provide will stay the same,” she said. “Be engaged with your police department, know who your senior lead officer is, ask questions. A community that is more communal, more engaged with each other, is a safer community.”