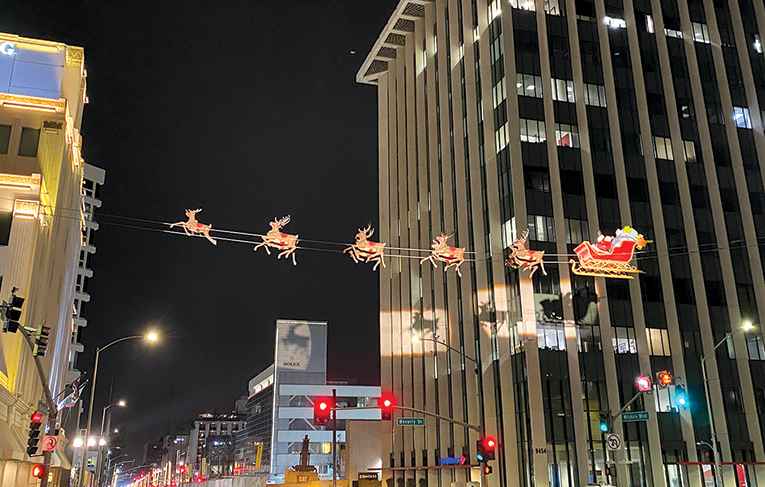 It’s beginning to look a lot like Christmas in Beverly Hills.

On July 15, the City Council approved the 2021 holiday décor for Rodeo Drive. On Tuesday, it gave the go-ahead for its citywide displays.

The total cost — $3.4 million — is already funded through the fiscal year 2021-22 budget. Councilman Lester Friedman noted that last year’s budget for the decorations had been significantly reduced due to the pandemic.

“It’s really nice to see that we’re coming back full force and inviting people, hopefully, to come [back] as long as COVID is under control,” he said.

Of the total cost, more than $1.1 million is for the continuation of annual décor items. Almost $2 million is for new items or the replacement of aging decorations.

Approximately $625,000 will be spent on the Lily Pond and Beverly Gardens Park. In addition to an annual décor, which includes a menorah, staff will install “Glowing Reeds,” an LED-lighting display that emerges three to five feet from the pond surface.

Beverly Hills will host a choreographed audio/light show during the holiday season. Laura Biery, the city’s marketing and economic sustainability manager, said the shows, which last approximately 10 minutes, will be held at 6:30 and 7:30 p.m., Sunday through Thursday, and at 6:30, 7:30 and 8:30 p.m. on Fridays and Saturdays.

The city will spend approximately $500,000 on overhead decorations on North Cañon Drive. The new installation, “Playful Swag,” was conceived with the expansion of outdoor dining in that area in mind and will have an annual cost of approximately $60,000 to $100,000 per year, Biery said.

Ten strands of animated, programmable lights, which have a lifespan of five years as well, will be installed. According to a staff report, the lights could also be used above other streets in the Business Triangle.

“They can move and shimmer and fade,” Biery added.

Approximately $330,000 will be spent on an elf tree ($280,000) and patio décor ($50,000) at Beverly Canon Gardens. Biery said the patio will offer an interactive lighting element that will be great for “Instagrammable” moments.

Additionally, the Santa and reindeer display above Wilshire Boulevard, which Biery said “is knowingly beloved by our community,” has been deemed structurally unsafe and will be replaced after a run of more than 20 years.

The display was “significantly refurbished” in 2006. However, the city’s holiday décor consultant determined it to be unsafe for reinstallation in 2020. Biery said the city will replace it with a custom-built item that will be as close to the original as possible.

She said all the holiday decorations will be installed no later than Nov. 13 and removed by Jan. 3. Whether the city hosts a holiday lighting celebration event is yet to be determined, Biery said.

“However, staff is actively monitoring what the COVID-19 guidelines are currently, and as we get closer to that date, will make sure that is a safe opportunity for all,” she added.

No public comments were submitted, and council members were pleased with the presentation. However, they felt that Hanukkah was underrepresented. Biery said city staff would address that in future updates to the council.

Mayor Robert Wunderlich said he liked that the citywide décor tied into the design proposed for Rodeo Drive.

“It’s echoing the return to tradition with a contemporary, whimsical flair,” he said, adding that the “spectacular display” should further signal that Beverly Hills is open for business. “As we emerge from the pandemic, it’s important for us to continue to establish that we’re the place for visitors to enjoy … the holiday season and for visitors to come during the holiday season.”