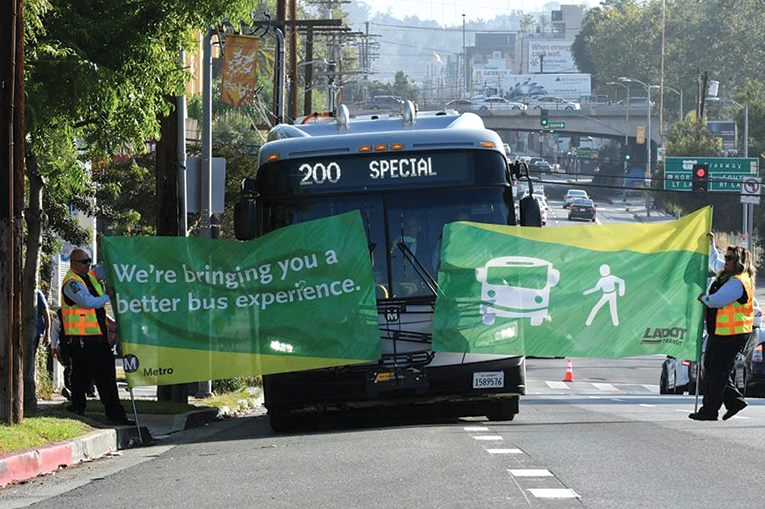 The Los Angeles County Metropolitan Transportation Authority, city of Los Angeles, Los Angeles Department of Transportation and StreetsLA have partnered to improve bus speeds, frequency and reliability during peak travel times along Alvarado Street with the launch of the first phase of a dedicated bus only lane.

As part of the NextGen Bus Plan and the agency’s Better Bus Initiative, Metro has been working closely with LADOT to implement a series of dedicated bus-only lanes along heavily traveled corridors to complement NextGen and provide faster bus speeds. Phase two of NextGen was recently implemented and calls for the addition of hundreds of additional bus trips on weekdays and weekends, with a focus on adding mid-day bus service.

To improve bus speeds, the first phase of the dedicated bus-only lanes along Alvarado Street will run between 7th Street and the Hollywood (101) Freeway. When completed later this summer, the bus-only lanes will run along a 1.7-mile segment of Alvarado Street between 7th Street and Sunset Boulevard, adding a bus priority lane in the peak traffic flow direction during the morning and evening rush hours, Monday through Friday.

“The Alvarado Street Bus Priority Lane Project is an important step in building a safer and more equitable transit network for Los Angeles County, especially as it relates to this corridor, an area I am proud to represent,” said Los Angeles County Board Supervisor and Metro First Vice Chair Hilda L. Solis, 1st District. “It will enhance mobility and safety for the thousands of people in the community, most of whom are low-income riders from Latinx backgrounds who use transit to get to and from school, work, businesses and appointments along the corridor.”

“The dedicated bus lanes along Alvarado will become a real game changer for the region and for the way Metro serves this heavily traveled corridor,” Metro CEO Stephanie Wiggins added. “We expect bus speeds to improve up to 15% and greatly enhance the customer experience through better reliability.”

“In addition to helping local residents and essential workers by reducing travel times during peak hours by up to five minutes, these lanes will help us combat climate change by eliminating car trips, one of the single greatest contributors to carbon emissions in California,” added Los Angeles City Councilman Mitch O’Farrell, 13th District.

Entering the Park La Brea complex is too easy