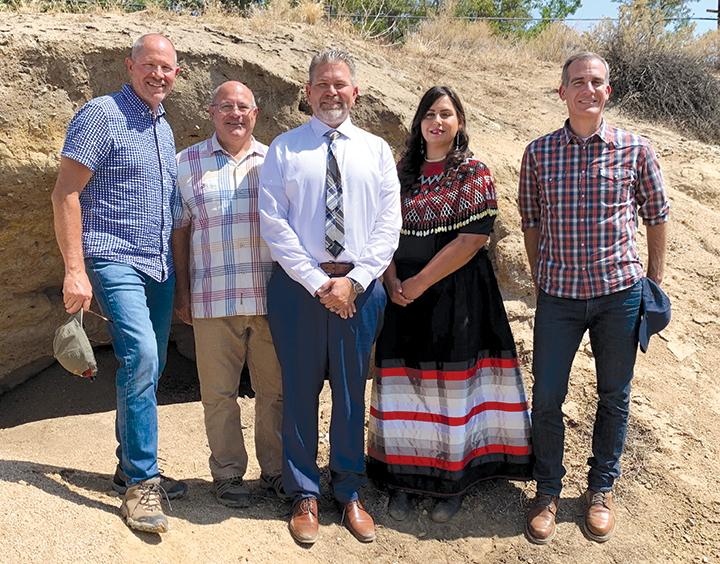 Mayor Eric Garcetti on July 16 visited with local officials and the Paiute Tribe of Independence in the Owens Valley to highlight the Los Angeles Department of Water and Power’s partnerships, investments and projects that have played a critical role in improving Los Angeles’ drought resiliency, creating jobs and restoring local habitats.

The trip comes on the heels of an announcement from Gov. Gavin Newsom, who called on Californians to reduce their water consumption by 15% in response to the current drought.

“In Los Angeles, conservation is a way of life, because we know that living with limited water resources isn’t just a phase – it’s the new normal,” Garcetti said.

In Los Angeles’ Green New Deal, the mayor set several goals around conservation, including a pledge to reduce L.A.’s per capita water consumption by 25% by 2035; source 70% of L.A.’s water locally by 2035; recycle 100% of L.A.’s wastewater by 2035 for potable use; reduce LADWP’s purchases of imported water by 50% by 2025; and capture 150,000 acre feet per year of stormwater by 2035. All of the goals are on track and have better prepared Los Angeles to take on the increasing challenges of water resilience and independence in an era of increasingly dry conditions.

LADWP now offers one of the most comprehensive water conservation programs of any utility in the country, including a financial incentive program that will increase from $250,000 to $2 million per customer for the installation of pre-approved conservation equipment for commercial and multifamily customers; a $400 rebate for high-efficiency clothes washers; a $3 per square foot turf replacement rebate; and free efficient faucet aerators and showerheads.