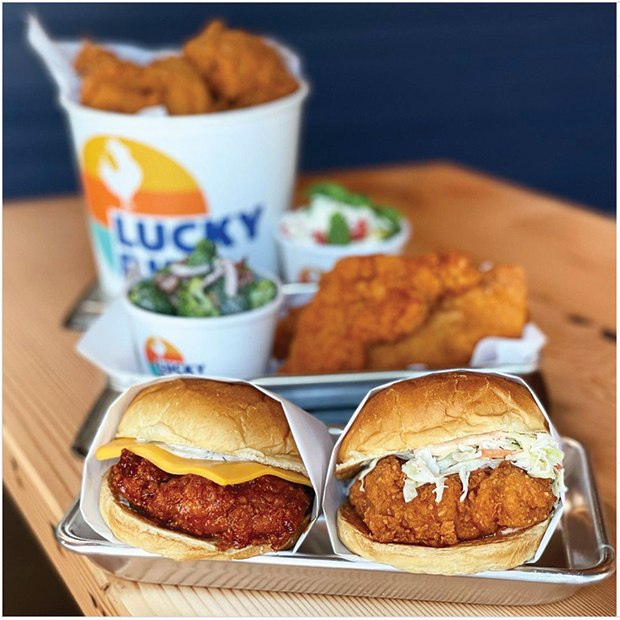 Lucky Bird Fried Chicken began as a stall at the Grand Central Market in 2018. Word got out about Chef Chris Dane’s chicken which is brined in his signature citrus and herb mixture. This talented chef combines lemon juice, garlic, rosemary and thyme. He dredges the chicken in a blend of spices, dips it into buttermilk and then dips it again into more spices and finely ground flour. This creates a delicious light, crispy crust on the outside and the moist flavorful citrus chicken inside. It soon became one of the most popular fast casual eateries in downtown L.A.

Dane and his wife Christine have opened another location in Eagle Rock. A few weeks ago, I had the opportunity to taste his unique fried chicken and a variety of side dishes with my daughter. Now I understand why he has received such a loyal following.

The new location in the former Eagle Rock Public House was redesigned by Ana Henton. She kept the exposed bowstring trusses and the roll-up garage door to provide fresh air while dining. She added a beautiful 42-foot, one-of-a-kind contemporary mural by artist Erin Miller Wray, and strung white party lights from the ceiling, adding to the festive atmosphere.

Chef Dane has more than 17years in the kitchen, including time at Providence and Connie and Ted’s. He tried out dozens of recipes on his favorite food critics – wife Christine and their twin boys. These taste-testers approved his creamy Lucky Bird mac & cheese, as did my daughter when she declared it was her favorite side dish.

Other sides we enjoyed were the crispy skin-on fries with ketchup; shredded slaw with a zing of vinegar; cubed roasted sweet potatoes with a hint of sweet maple glaze; chunky watermelon and cucumber salad with feta cheese; and marinated cold green beans with sliced flavorful cherry tomatoes.

While dining, Dane walked out to welcome everyone. He shared with us that while he was working from the original Grand Central Market menu, he reimagined some recipes during the shutdown and developed a lot of new ones. “I dialed up the lemon and herb notes in our brine and put my own twist on a hot chicken sandwich, with a sweet and spicy glaze, pickled jalapenos and buttermilk ranch,” Dane said. 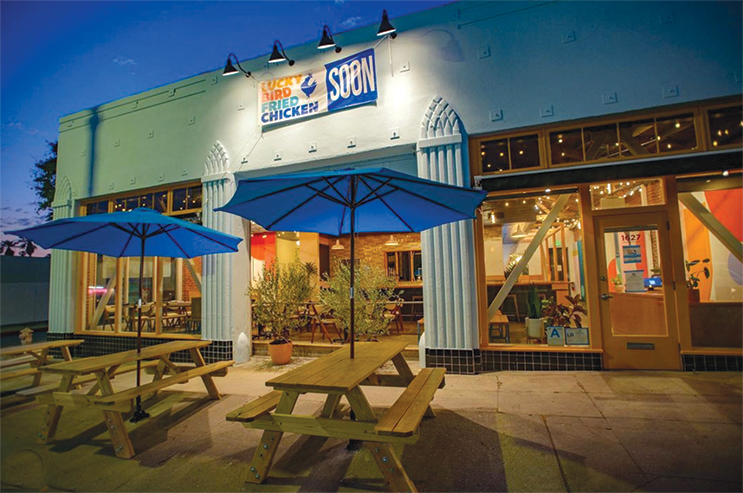 The signature fried chicken and new tenders arrived on a tray including five different dipping sauces. I enjoyed the creamy buttermilk ranch and spicy buffalo sauces. My daughter thought the thick habanero honey; yellow honey mustard; and hickory bbq sauce were the best.

Diners seeking salads will have the option to order the Grand Central Market chopped salad offering romaine lettuce and garden veggies. This salad can be dressed with buttermilk ranch, honey mustard or a shallot vinaigrette.

We finished with a creamy banana pudding with a dusting of graham crackers on top and a blueberry cobbler with a homemade biscuit top. Both were delicious.

Sit indoors or at one of the outdoor picnic tables. It’s first come, first served, with no reservations required. The restaurant provides easy ordering and an enjoyable, affordable dining experience for all.

The Eagle Rock location is open on Monday from 4 to 9 p.m. It’s closed on Tuesday and Wednesday, and then reopens on Thursday through Sunday from 4 to 9 p.m., and until 10 p.m., on Friday and Saturday. The Grand Central Market location is closed on Monday, and open the remaining days of the week starting at 11 a.m. Follow on Instagram (@luckybirdla) and online at luckybirdfriedchicken.com. 1627 Colorado Blvd., (323) 739-0383 and 317 S. Broadway, Los Angeles.

OUT on Robertson out in West Hollywood