‘Loki’ sets the stage for a multiverse

Tom Hiddleston stars as Loki in the new Disney+ series, which is part of the Marvel Cinematic Universe. (photo courtesy of Disney+)

The future of the Marvel Cinematic Universe belongs to the small screen. Following the massive success of “Avengers: Endgame,” the last film to dominate the box office before the pandemic, Marvel Studios announced a slew of Disney+ projects.

“WandaVision” quickly proved superhero stories need not rinse and repeat the theatric formula that always saw the world or universe in jeopardy come an excessive third act that, frankly, sometimes felt exhausting in its predictability. The rise of the Scarlet Witch worked incredibly well, though “Falcon and the Winter Soldier” fell flat as the sophomore series progressed.

Third time’s a charm as “Loki” knows no bounds. This isn’t the Loki (Tom Hiddleston) from most Marvel films (specifically a couple “Thor” flicks and “Infinity War”). This guy’s a variant, a term now taking nerd social media by storm.

When the Avengers attempted to travel back in time to fix what villain Thanos broke, they accidentally gave a past Loki from 2012’s “The Avengers” a chance to escape, creating a breach in the timeline.

His freedom is short lived, however, when the Time Variance Authority, an agency charged with protecting the “sacred timeline,” captures him and forces him to help with an investigation well suited to his unique set of skills. That’s the basic setup, and everything else that unfolds shouldn’t be spoiled – though a few teases might just pique your interest.

To start, agent Mobius is played by a mustachioed Owen Wilson, resulting in an oddball buddy-cop pairing. Just replace police officers with the Norse mythology’s God of Mischief and a time detective attempting to prevent “nexus events” that can bring about the end of all things.

Even addressing other actors who appear beyond the first episode risks giving things away, so try to approach “Loki” free of the many, many spoilers easily accessible online. Sophia Di Martino (in her biggest role to date) kills as a mystery character, perhaps stealing the show entirely.

Other supporting players hold down the TVA well, including Wunmi Mosaku’s (“Lovecraft Country”) Hunter B-15, Gugu Mbatha-Raw’s big-wig Ravonna and Miss Minutes (voiced by Tara Strong, particularly famed for introducing the world to DC villain Harley Quinn in the early ‘90s), a talking 2D animated clock that serves as the agency’s AI. 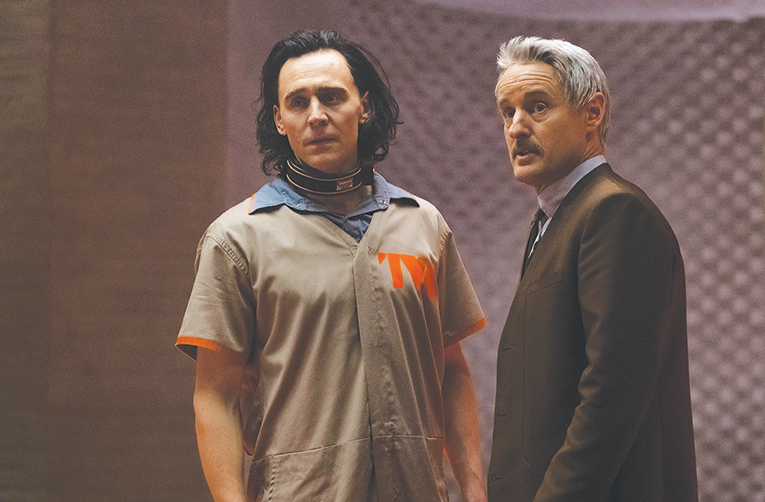 The pairing of Tom Hiddleston, left, as Loki, and Owen Wilson as Agent Mobius, adds a buddy-cop dynamic to the new series. (photo courtesy of Disney+)

That last character serves as a primary example of the ways “Loki” stands out. “Guardians of the Galaxy” bathed with visual oddities across a space operatic galaxyscape. “Loki” provides the MCU’s best villain with an environment equally batty.

And Thor’s frost giant brother thrives in this rich setting, evolving from the villain who just attacked New York with an alien army (at least for him, though the series is technically set after the events of “Endgame”) to someone more conflicted. Perhaps too quick. At times, he becomes rather passive, hardly the shenanigan-loving trickster thwarting his brother’s allegedly more noble endeavors. That’s a bit tragic, but hey, Marvel can get a bit lost in the plot.

Another flaw – and this is big – is an old friend to all major properties. Let’s call it the progressive wink to sexuality. The comics have long explored Loki’s fluid sexuality, depicting the God of Mischief as a man and woman and in relationships with many kinds of partners. “Loki” and Marvel folks promised to honor that print legacy, but the Disney+ series dedicates only two lines of dialogue, one a fragmented sentence.

It’s little more than texture, the absolute bare minimum for representation, with headlines lasting longer than the screen time. That’s a shame considering how effective “Loki” is overall, especially as a companion to “WandaVision” in setting up the major arcs of future Marvel projects across a multiverse. Prepare for some once-deceased characters to return, but don’t hold onto any hope for the major ones, who only left because they actually wanted to.

Apparently characters can return from the dead or debut with quite different personalities, but sexuality doesn’t seem to matter. Whelp, it does for Disney, who as of now prefers lip service that can be deleted in regions around the world. Pity too. “Loki” is a marvelous series that could reach truly glorious purpose. From an optimistic point of view, however, a “Loki” series was probably never in the original plan – especially one based more on character interactions and exploration with action sequences – so perhaps the ol’ Mouse can learn new tricks with just enough peer pressure.