Live entertainment silenced in OUT Zones 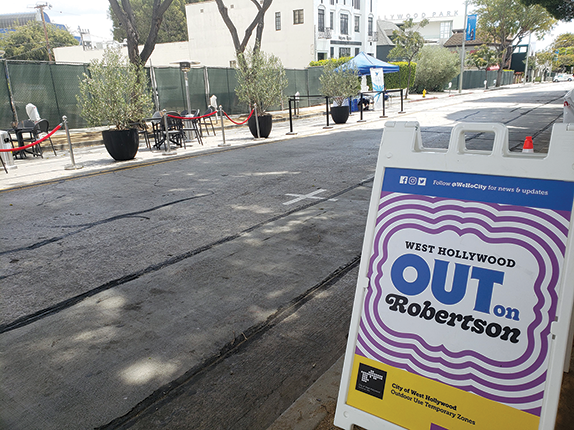 With California’s economy almost fully reopened, the city of West Hollywood is continuing to roll back its OUT Zone permit program, which made it easier for businesses to expand operations outdoors amid the pandemic.

Council members voted unanimously to remove live entertainment from OUT on Robertson, a pilot project that closed Robertson Boulevard between Santa Monica Boulevard and Melrose Avenue primarily on the weekends.

Councilwoman Sepi Shyne said she originally approved the Robertson pilot because she envisioned the area hosting food trucks, yoga classes, sober community meetings or the like.

“To me, adding extra noise to all of that is [excessive],” she said, adding that she would support a one-time event if the circumstances were right. “I think we do need to think about residents that live in that area and [that] they want to have some quiet on the weekends.”

Mayor Pro Tempore Lauren Meister agreed, stating that the city already has a process for businesses to get a permit for outdoor entertainment.

“There used to be noise complaints [in that area] all the time up until COVID,” she said. “Just having that live entertainment, I think it will be a mistake.”

Mayor Lindsey Horvath noted that, due to the council voting on an amendment to an urgency ordinance, four of the five council members were required to approve the measure for it to pass. With Councilman John D’Amico absent, the vote would have to be unanimous, she said.

Given the absence of D’Amico, who is an OUT Zone proponent, Councilman John Erickson called for the council to table the item until its meeting on July 21, when D’Amico will be present. City Attorney Lauren Langer said the council would need to make a decision or give staff some direction about the item at the meeting — as it was part of an executive order — even if the council opted to change its decision later.

Shyne made a motion to rescind the current order, which nullified outdoor entertainment on OUT on Robertson, until July so that staff could bring more information.

Some neighbors are happy to hear that the noise will cease.

“I think it was a good decision,” said Manny Rodriguez, vice president of the West Hollywood West Residents Association. “The entertainment and the music belong inside, not outside.”

He has spoken out against OUT on Robertson due to the fact that it closed Robertson Boulevard on the weekends and has not been the draw that the community was led to believe it would be. “[It is time] to give public property back to the public,” Rodriguez added.

“It’s time to get back to normal,” he said, adding that the majority of the amenities of the OUT Zones benefitted paying customers of the nearby businesses, not the community. “We want our sidewalks back. … It’s the way it’s worked forever, and it’s worked very well.”

Following last week’s meeting, city staff stated that West Hollywood would be preparing all of the necessary documentation to remove live entertainment from all OUT Zones, including Out on Robertson.