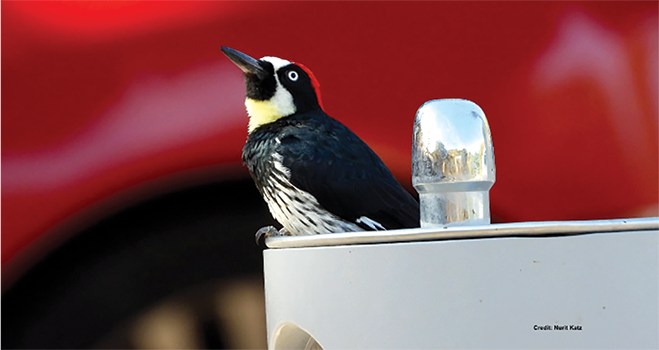 The acorn woodpecker is one of 37 charismatic umbrella indicator species for the city of Los Angeles, according to LASAN. (photo by Nurit Katz)

Los Angeles Sanitation and Environment has released its first ever list of 37 charismatic umbrella indicator species for the city of Los Angeles. The list, which was developed in conjunction with the L.A. Biodiversity Expert Council and includes seven different pollinators, provides a focused set of species that the city can track to assess changes in biodiversity and habitat quality.

While a handful of cities around the world and different U.S. government agencies (such as the National Park Service and U.S. Fish and Wildlife Service) refer to charismatic indicator species that are being tracked, there are no easily accessible or published lists of these species. The city of Los Angeles is breaking new ground by publishing this list in a way that actively engages the public and then using the community-generated data to track and monitor biodiversity over time.

“Los Angeles may be known as a sprawling metropolis, but it’s the abundance of natural beauty that makes this city such a prolific hotspot for native life,” Mayor Eric Garcetti said. “Our city’s wildlife deserves the strongest protection possible, and the recognition of these species will help us continue to safeguard their well-being.”

LASAN will be tracking the presence and distribution of the indicator species as part of one of the 25 metrics in the L.A. City Biodiversity Index. When these species are present, it generally means that the space has good habitat quality and connectivity to other open space and is of sufficient size to host a diversity of species.

This summer, LASAN is partnering with the Los Angeles Public Library to encourage Angelenos to observe, photograph and map these species in the L.A. Bioblitz Challenge, a two-month program that continues until Aug. 7. The goals of this collaboration are to enumerate the city’s existing native biodiversity, reduce observation cold spots and increase the awareness residents have of local wildlife and habitats.

“I’m so pleased our biodiversity team, our L.A. Library and our backyard scientists will be hard at work gauging the health of L.A.’s tiniest residents right down to the ecotope level,” said Los Angeles Councilmember Paul Koretz, 5th District, author of the city’s biodiversity motion. “With the United Nations Biodiversity Conference of Parties coming up in October, especially for our pollinating migratory creatures, we must look, think and plan beyond the city’s borders and begin to act as a global community if we are to successfully heal the planet.”