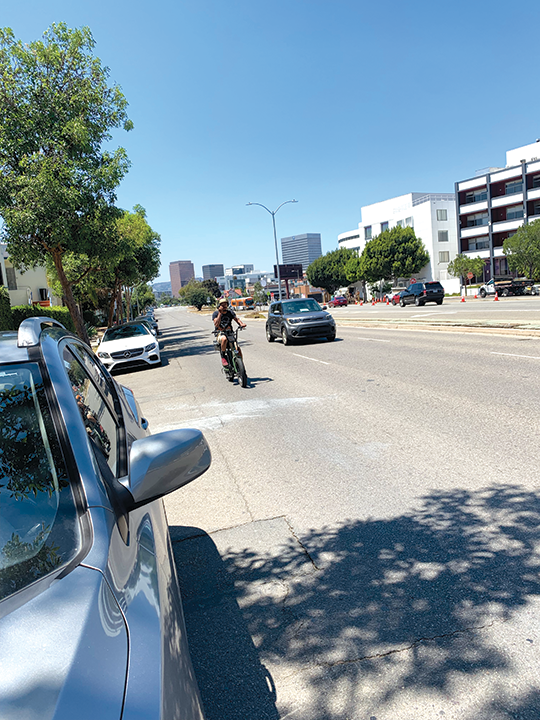 New bike lanes will be created on San Vicente Boulevard after the street is resurfaced between Olympic Boulevard and La Brea Avenue. (photo by Michael Villalpando)

A plan to install protected bicycle lanes on South San Vicente Boulevard between La Brea and Fairfax avenues, a part of Los Angeles’ efforts to balance the needs of all road users, is moving ahead with construction anticipated to begin in late 2021 or early 2022, the city’s transportation department said.

Automobile traffic lanes in each direction will be reduced from three lanes to two. Street parking will be moved several feet off the curb, so that parked cars protect the bike lanes along the major east-west thoroughfare that connects multiple neighborhoods and commercial corridors.

“At this time, LADOT is collecting data and feedback from the community and beginning the project’s initial design process. The project’s construction timeline is still to be determined based on the Streets LA resurfacing schedule, which has been adjusted over the past year to accommodate pandemic regulations,” LADOT spokesperson Colin Sweeney said.

“Due to this fluctuating schedule, the project’s final construction timeline is to be determined. Pending community input, construction is anticipated to begin in late 2021 or early 2022,” he added.

San Vicente Boulevard is due for resurfacing between Olympic Boulevard and La Brea Avenue, and LADOT plans to utilize this opportunity to make safety upgrades and expand the bicycle network on the street, Sweeney added.

The 1.3-mile stretch of curbside bike lanes has drawn support from neighborhood groups and residents. The lanes are a small piece of the city’s Mobility 2035 plan adopted by the City Council in 2015 in response to a 2008 state law requiring local jurisdictions to plan for “a balanced, multimodal transportation network that meets the needs of all users of streets, roads and highways.”

Bike lane advocates say vehicle traffic will be impacted but not significantly. They point to LADOT traffic statistics that show that fewer cars move east and west on San Vicente Boulevard during rush hours than on Pico Boulevard, another east-west thoroughfare used by area residents and commuters that has two-lanes in each direction.

Advocates also tout the safety benefit of reducing the likelihood of speeding cars, and pushing noise and vehicle exhaust pollution away from residents using the sidewalk.

After the city launched an initiative in April 2020 to accelerate repaving and repair of major streets to take advantage of reduced traffic due to the city’s stay-at-home order, Schneider, who is also a member of the steering committee of the nonprofit advocacy group Streets For All, saw an opportunity to implement an aspect of the city’s mobility plan as streets were being repaved.

“San Vicente is a very interesting street,” Schneider said. “It is unusual because it goes through a mostly residential area, and it has an extra lane compared to the La Brea, Fairfax, Wilshire and Pico. So, you’ve got a residential street, you’ve got one extra lane, you have a protected bike lane on a mobility plan, and you had the city about to repave it.”

The other half of the project is located within the Pico Neighborhood Council, on the southern side of San Vicente Boulevard, and Schneider said the project eventually won support from the Pico council’s land use committee.

Meg McComb, interim chair of the Wilshire Vista Neighborhood Association, said her neighborhood association did not pass a resolution in support of the project. She said that is because the association’s leadership did not feel it could speak for the approximately 1,700 households in the neighborhood south of San Vicente Boulevard. “Our purpose is to be nothing more than a conduit of information,” McComb said.

But an online survey of Wilshire Vista residents last fall found that of 142 respondents, about 73% supported the project. Those who opposed the project cited increased  congestion due to the reduction to two lanes in each direction.

“I can only tell you what we got from that survey,” McComb said. “And it looks like, because it is a family-oriented community – we have a lot of single family dwellings, a lot of families with kids and a lot of dog walkers – they would prefer, I believe, that we have a slowing of the street. It makes sense. Because San Vicente is a very speedy street.

“And so I think that just about everybody … would say ‘let’s slow the street down a little bit,’ so that we have a calming effect by having fewer lanes, and a designated bike lane for people, as well as people on rollerblades and skateboards. I think that’s common sense and common safety,” McComb said.

LADOT is encouraging anyone who would like to learn more about the project to view the recorded online workshop from March 2021. The department is still taking project feedback via its “Feedback Map” and project feedback portals, and by visiting ladotlivablestreets.org/projects/san-vicente.

What great news for the community