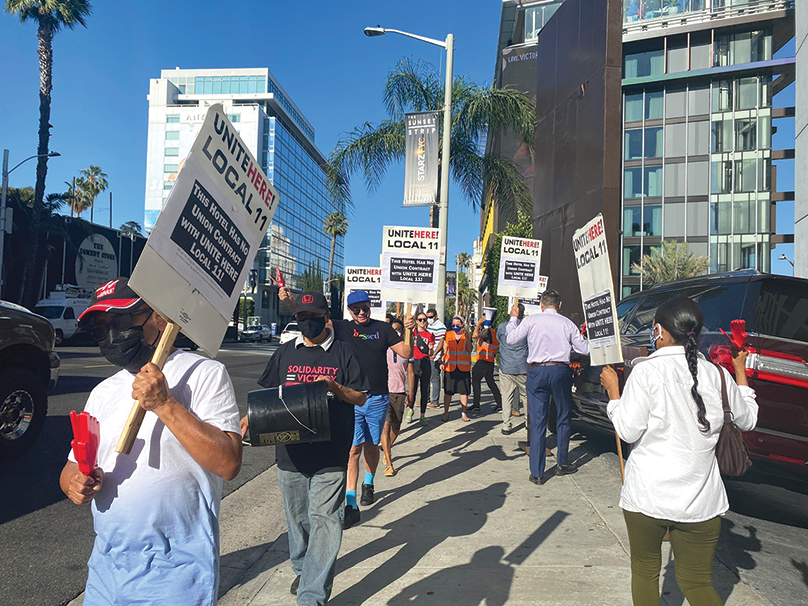 The public discourse is heating up as a vote nears for a potential ordinance related to hotel workers in West Hollywood.

On July 19, the City Council will consider a proposal that supporters – including the union Unite Here Local 11, Mayor Lindsey Horvath and Councilwoman Sepi Shyne – say will better protect hotel workers from sexual misconduct, ensure they are properly compensated for their work and make sure they are rehired by hotels as tourism picks up, among other changes.

The union and council members claim that housekeepers and other hotel workers were underpaid and overworked before the pandemic, and now, after they were laid off due to COVID-19 closures, many of them remain jobless, despite a strengthening tourism industry.

In an email, Shyne said “the pandemic devastated the hotel industry, especially the hotel workers who were predominately laid off.”

“Even before the pandemic, there was need to have stronger protections for hotel workers, but the pandemic made the situation worse,” she said. “As we look to measures for economic recovery, we need to make sure recovery includes everyone.”

Horvath added in an email that “West Hollywood’s economy relies heavily on travel and tourism, which means our hospitality industry workers, in many ways, are the lifeblood of our community.”

“Especially coming out of a global health pandemic where these frontline workers faced great risks – including loss of employment altogether – our city must take seriously the well-being of our hotel workers, as well as the guests they will accommodate and usher in a recovery that includes all members of our community,” she said.

On July 1, Danielle Wilson, organizer with Unite Here Local 11, led a protest outside the 236-room Mondrian Hotel, located at 8440 Sunset Blvd. in West Hollywood. Approximately 300 workers were laid off from the Mondrian alone, according to Unite Here Local 11.

“Does this city stand on the side of the housekeepers and the dishwashers who make up the backbone of our economy, or does it stand with a mega-rich company like Pebblebrook [Hotel Trust], which owns the Mondrian … What side are we on, West Hollywood? Pebblebrook claims that there is a labor shortage, yet the workers behind me who have dedicated decades of their life to the industry have yet to be called back to work, and that ain’t right,” Wilson said. 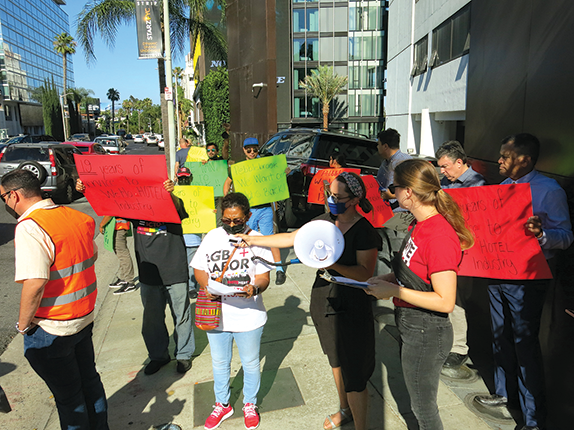 Norma Hernandez, a former Mondrian Hotel housekeeper for 13 years, said she wants her job back. (photo by Cameron Kiszla)

Lester Aponte, president of the Stonewall Democratic Club, also spoke during the protest “in solidarity” with the hotel workers.

On the other side of the issue, a hotel-backed advocacy group called SOS WeHo claims the union and the council members have ulterior motives. Genevieve Morrill, president and CEO of the West Hollywood Chamber of Commerce, which is supporting and advocating for SOS WeHo, said the ordinance is a “political audition” for the council members who were “elected recently and someone who is running for higher office.” Shyne was elected late last year, and Horvath is running for Los Angeles County Supervisor.

In addition, hotels that bargain with the union would be exempt from the ordinance, Morrill argued, providing leverage for Unite Here Local 11 in negotiations.

“The union is trying to insert themselves as the third-party certification company for the hotels,” she said. “They’re trying to force collective bargaining agreements with the hotels by doing that.”

As for the employees who are seeking to return to work, Morrill argued that there may be union-related or other issues keeping them from their jobs, as she has heard from local hotels that they are short on employees.

“The hotels are looking for people to work,” she said. “The union is fabricating information to [garner] public and political support under the auspice of this being worker protection. It has nothing to do with worker protection. This has to do with the union having collective bargaining agreements with our hotels.”

Morrill added that people looking for jobs could be hired at local restaurants, which are also desperate for workers.

“There’s a gazillion articles that we have a nationwide labor shortage right now, that people aren’t coming back to work. This is ridiculous, what they’re saying,” she said.

Horvath said “there seems to be a disconnect” between the hotels and the workers. She added that she’s met with hotel managers who have struggled finding workers – even offering signing bonuses of $1,000 – as well as workers who haven’t been able to find jobs at all, “let alone jobs with signing bonuses.”

“An ordinance like the one that the council will consider has the ability to help resolve these issues by establishing retention and recall policies,” Horvath said. “Workers will know they’ll be able to go back to work in the jobs they had, and hotel managers will know they’ll have employees back on the job who know their standards and expectations.”

Shyne said she’s awaiting more information from city staff on the status of hotel workers in the city.

“I look forward to reading the staff report for this item when we receive it, hearing from members of the public and discussing this item with my colleagues at the July 19 City Council meeting,” Shyne said.

I like how city council members are suddenly experts in running hotels. Maybe they should start their own hotel and show everyone how it’s done instead of lecturing from the sidelines.