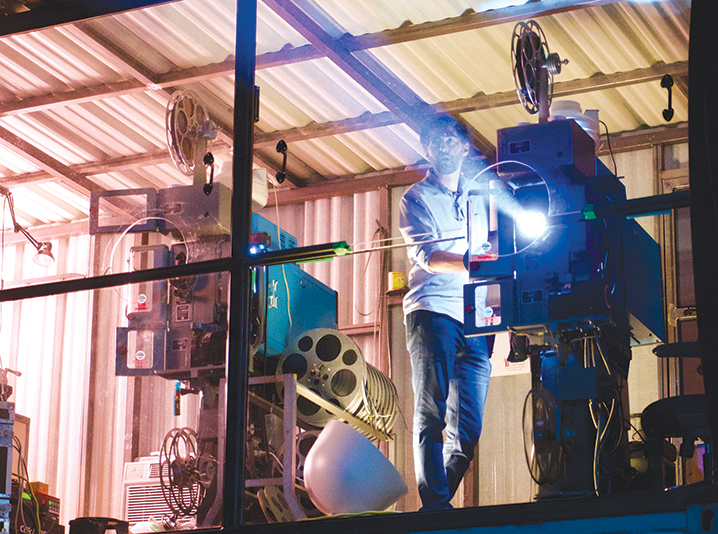 The Hollywood Legion Theater opened the first nightly drive-in theater in Hollywood in 2020, and on Thursday, July 1, the theater will premiere its newly-installed 35mm film system and kick off the Summer of Celluloid film series, sponsored by Kodak Motion Picture and Entertainment. The Hollywood Legion Theater will be the only drive-in cinema in the western United States running 35mm film.

“Analog 35mm film projection at an outdoor cinema is a rare and special experience,” Hollywood Legion Theater creative director and chief projectionist Taylor Umphenour said. “In this case, we’ve decided to go even further by giving our audiences the unique experience of being able to see our film projectionists running shows through our transparent glass-walled projection tower.”

“We are pulling back the curtain,” theater director Bill Steele said. “We hope that audiences will develop an appreciation for just how much work goes into putting on film shows, and how important it is that we all help preserve this precious art form.”

The project was funded by donations from Legion Theater patrons and filmmakers, as well as contributions from studios. Kodak Motion Picture and Entertainment was one among the sponsors.

“We received an outpouring of support from our fans and key contributions from several major organizations and companies dedicated to analog film,” Umphenour added.

“Kodak applauds the Legion Theater’s ingenuity and tireless efforts to bring Angelenos a unique theatrical experience during the pandemic and beyond,” said Vanessa Bendetti, global managing director of Kodak Motion Picture and Entertainment. “Projection on analog film is a visceral experience that’s incomparable to what we see on small screen devices and in-home monitors. We appreciate the Legion’s commitment to and investment in 35mm and 70mm film projection, and the drive-in’s new transparent projection booth should not be missed.”

The Summer of Celluloid film series launches with “Jaws” on July 1, and “Twister” on July 2.

Tickets start at $25 and include unlimited popcorn. For information and tickets, visit hollywoodlegiontheater.com.